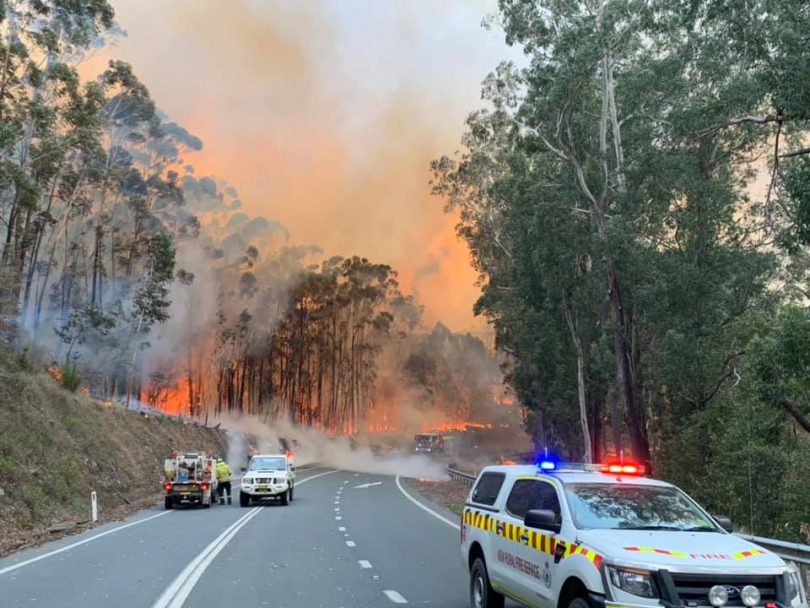 The Kings Highway west of Nelligen this week. Photo: Ulladulla Fire and Rescue

Increased fire activity on the Clyde Mountain continues to make conditions dangerous, with police saying the Kings Highway will remain closed for the foreseeable future.

The Currowan bushfire continues to burn north of the highway and is again at an emergency level as of 12:30 pm on Thursday (19 December).

“There is still active fire in the areas around Benandarah, Windywoppa, Currowan and on the northern side of the Kings Highway,” the NSW Rural Fire Service website says on 19 December. “Crews continue to conduct backburning operations to strengthen containment lines along the Kings Highway.”

Eurobodalla shire mayor Liz Innes says firefighters on the Clyde Mountain are battling to keep the blaze from moving into Monga National Park, in the shire’s north-west.

“I want the community to be prepared. There’s potential for serious fire impacts over the weeks and months ahead,” Ms Innes said.

“Firefighters are working in appalling conditions on steep and heavily forested terrain, up to Government Bend. It’s taken a massive effort to keep the fire contained so far.” A new fire called the Tianjara Fire was listed by the RFS as an emergency level fire at 12:05 pm on 19 December.

It has forced the closure of the Braidwood/Nerriga road at 8:12 am. The road is closed in both directions between Turpentine Road and Oallen Road.

“Fire activity is increasing on the southern side of Braidwood Road at Tianjara. The fire may impact Wandandian, the Princes Highway and access to and Sussex Inlet today,” the RFS website said.

“There is the potential for the fire to reach Tianjara Prohibited Area which contains substantial unexploded ordinance. This will limit suppression activities.”

The area was used for military training in the 1940s. In 2012, for the first time, the range was identified by the Department of Defence as a contaminated site.

The Currowan Fire has now burned more than 100,000 hectares. Brad Collins from the NSW RFS says the Currowan Fire is only 40 per cent contained.

“There were a few hairy moments yesterday (18 December) when there was a spot over the Kings Highway and things aren’t looking good for tomorrow (19 December) as we will see some strong north-westerly winds come through at 80–85 km/h in the early hours of the Thursday morning,” Mr Collins says.

“In the north-east sector, the fire may even get into the back of Milton, Ulladulla and Burrill Lake,” he says.

“Potentially, there will be embers and smoke in those areas.”

Mr Collins said he is “hopeful that the containment lines will hold, but there’s no guarantee”.

With the economies of Braidwood and the Far South Coast reliant on the summer tourist trade, the closure of the Kings Highway has an instant impact.

“The reality is we’re only a few weeks into summer. There’s no rain predicted and hot weather is only going to make conditions drier and more uncertain,” Liz Innes said.

“Emergency agencies managing this fire are acutely aware of the impact of highway closures on Eurobodalla’s economy. Our businesses are already under the hammer and realistically that looks set to continue while the Kings remains shut.

“The economic impact and the stress and uncertainty right on Christmas is tough. But together – being strong, caring for each other, and most of all, being prepared – we will get through this.”

As Canberrans begin to wonder how they will get the coast this summer, the route via Bungendore to Tarago is possible, but from Nerriga to Nowra is no longer possible due to closure of the Braidwood/Nerriga road at Tianjara.

Many are using the Monaro and Snowy Mountains Highway via Cooma and Bemboka and turning north at Bega, which covers 369 km and takes around five hours.

The Kings Highway is closed from Narraghi Road east of Braidwood to Nelligen. Photo: Alex Rea

Safety first really means officials covering their backs. The economic impact of the King’s Highway closure will be immense for Batemans Bay and the Eurobodalla coast. Even if convoys need to be mounted there should be some effort to keep traffic moving.
I was stopped at Braidwood and then found the Araluen road closed, even though there is no fire activity there. The resulting detour added hugely to fatigue and compromised my safety as a result. I feel that a bit more thought and a bit less dramatics might help.

Australia needs to be serious about our contribution to climate change through the mining and export of coal, The Earth system is unravelling and we have not much time to change our destructive impact on the planet. Heartbreaking for children and life as we know it!!

Great Info thanks you so much