A trip to historic Tilba and the Tilba Dairy is always accompanied by a sense of anticipation. What have owners/dairy farmers Erica and Nick Dibden been up to? What innovations and improvements have they been making to their business lately? And what new products are on the shelves?

Our latest trip did not disappoint. For starters, the Main Street cheese shop has moved from the historic ABC Cheese Factory to the delightfully sunny cottage next door. This expansion has made way for both a state-of-the-art packaging machine and a new addition to their cheese-making team.

“We want to make something unique to Tilba, to this area, to our cows and to the cultures we can access.”

With the addition of Angel and the skills she brings, the Dibdens have been able to pursue their goal of producing more eclectic, farmhouse-style products with their high quality Jersey milk, starting with small batch, fresh lactic and washed rind cheeses. 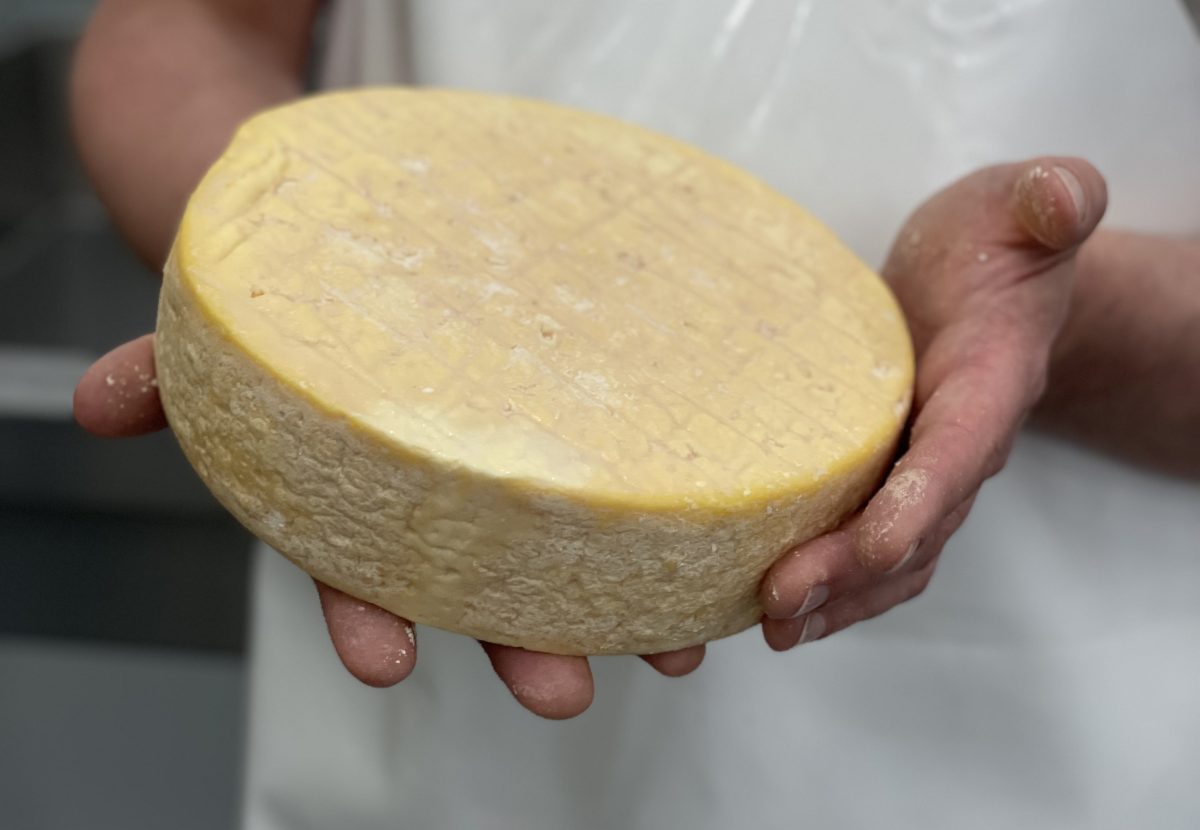 After some maturation, a washed rind will be the third new cheese to be added to the Tilba range. Photo: Lisa Herbert.

Globe-trotting Angel was born in England and discovered her passion for all things cultured and dairy while working in a high-end cheese shop in Vancouver, Canada.

Angel began making cheese at home to see how it compared with what she was selling in the shop.

“It wasn’t the same but it wasn’t bad, and I thought maybe I can be good at this!” she says.

On returning to Australia, she pursued her passion through a four-month internship at Castlemaine’s famous Holy Goat Cheese Co. She then moved to Tasmania’s farmhouse cheddar mecca Pyengana for a year and a half.

After that she assisted in opening a Melbourne deli and most recently worked for some years with cheesemaker Rosie Cupitt, founder of Cupitt’s Winery and Fromagerie in Milton.

Moving to Cobargo and joining Tilba Dairy two months ago, Angel was immersed in all aspects of the Tilba Dairy processes and is an asset to the team, bringing complementary ideas and style.

Erica says together with the dairy’s resident cheesemaker Michael Longbottom Angel would broaden the range with new textures and styles.

“Angel brings skills and a level of expertise we’ve not had previously,” she says. The Tilba Dairy cheese shop has relocated to a cottage next door to the historic ABC Cheese Factory. Photo: Lisa Herbert.

“This is what cream cheese is supposed to taste like and really shows how good the milk is,” Angel explains.

The second is a slightly more matured, creamy (and can we say, absolutely delicious) truncated pyramid known as Napoleon’s Revenge.

A third, washed-rind cheese is quietly waiting to reach maturation in the temperature-controlled wings.

Up until four years ago Australian cheesemakers weren’t allowed to obtain or use raw milk cultures at all. Grown in a laboratory which, as Angel says “is why we are allowed to use them at all”, these cultures hold the essence of the raw milk, enhancing the product while creating subtle variations in the finished cheese.

Angel says she’s excited about her role at Tilba.

“I love the challenge of getting a consistent result while it’s all handmade,” she says.

“I’d love to get it to four or 500 litres of the washed rind cheeses, but we’re starting small with 30 litres per batch.”

Erica says these styles, locally-made, have been a long time coming.

“I reckon the people of the South Coast will like these cheeses,” she says. “I feel they’ve been waiting for them a long while.” Both of Tilba’s new fresh lactic cheeses are available in the new cheese shop and are creating much chatter among local cheese fanatics.

And a hint from Angel for serving these cheeses?

“Forget the crackers, cut slender wedges of the Napoleon onto slices of crisp apple, and drizzle the Cloud with honey and fresh banana – the kids will love it.”

Tilba’s Three Udders brie – well worth moving down the coast for this alone.

The Bega Valley's iconic history of cheesemaking continues thanks in part to Kameruka cheesemakers Lisa Kremmer and Wayne White, whose...
Read More

How do you keep regional tourism dollars rolling in and support local producers when nobody can leave home for months...
Read More