The backroom boasted the best views of approaching weather – unfortunately, the absence of most of the roof made it all seem a little too real. Photo: Sally Hopman.

Year in Review: Region Media is revisiting some of the best Opinion articles of 2021. Here’s what got you talking, got you angry and got you thinking in 2021. Today, Sally Hopman takes us home.

I drove by a house the other day, a place I’d lived in for about 10 years but hadn’t seen in almost as long.

Usually there’s a feeling of warmth, of fond memories when you live somewhere for a while. Not so much this place. It was more surprise than warmth – surprise it was still standing.

Hidden on top of the hill along the Kings Highway, between Bungendore and Queanbeyan, I always used to think the owners must have bought the roof on special back when it was built in BC (Before Civilisation) because it only stretched across half the place. The ceiling in the big back room, which provided the best views of storms approaching, was held together by vintage birds’ nests and gaffer tape.

But it didn’t matter because you mostly felt the weather on your head before you saw it.

It must have been a great place in its prime.

If you cut your hands to shreds ripping out the blackberries, you could see the remains of a tennis court. The tiered garden went all the way down to the highway and there were even taps on every level. Rarely any water in them, but taps all the same.

The gutters must have come from the same place as the roof – they didn’t fit either. On the rare occasion it rained, the water would come streaming down everywhere, except into the underground tank.

I bought a lot of buckets. 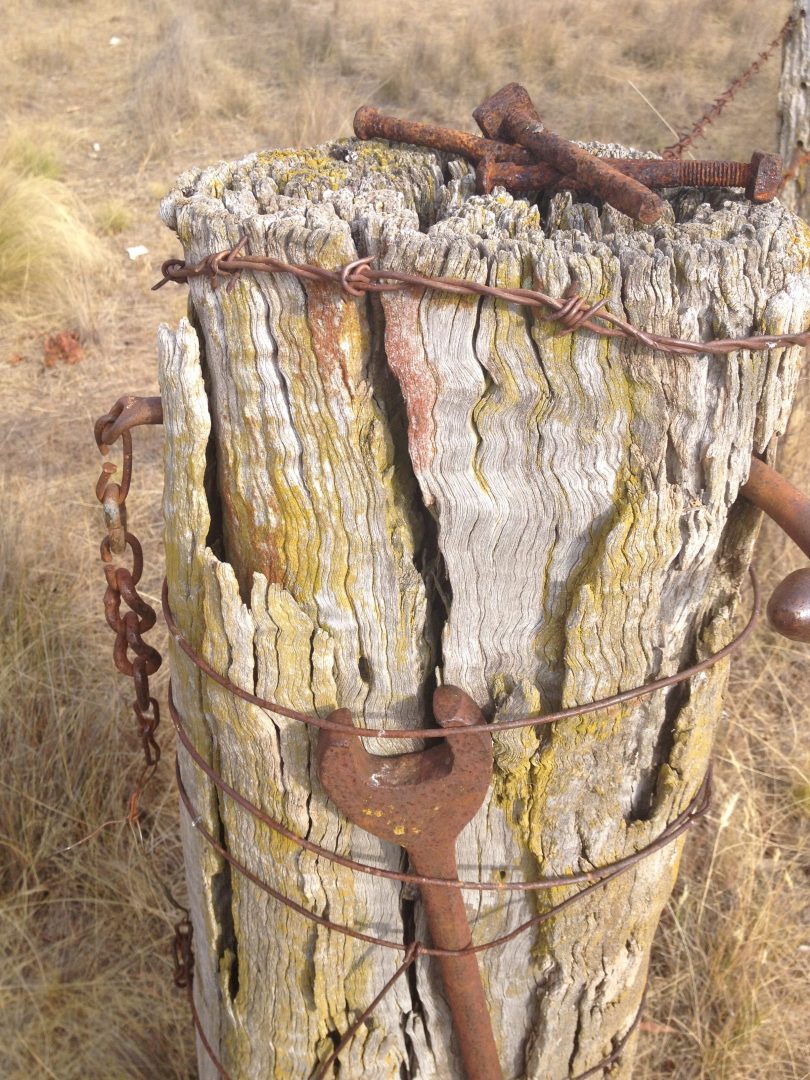 No wonder the place was falling down when the tools we found on the property made better decorations. Photo: Sally Hopman.

Word must have spread about the unusual water supply. Coming home late one afternoon, I saw a man – complete with cloak – staring at one of the taps. The tap was spouting water, which I had never seen it do in its life. He was chanting at it.

I drove up behind him, watching and waiting, armed with a tiny blind dog, a boofhead Labrador and another dog that would only move for food. Cloak Man ignored us.

After a few minutes, I bravely wound down the window and asked if I could help, positive that a TV camera would appear at any moment. I didn’t much care he was a stranger on my land, I cared even less he was wearing a cape – OK that’s not strictly true – but I was cranky he was wasting my water.

He continued to ignore me.

Suddenly, he got up, looked at me like I was the alien at his house, and ran down the driveway. I drove up to the house and, obviously because he had wasted so much water, I couldn’t waste any more – so I drank wine. Lots of wine.

It was the sort of house that attracted odd folk.

One night, I pulled off the highway into the sort-of hidden driveway to be faced by a bottom. A wrinkly, elderly bottom. Thankfully, the front half of it was aimed in the other direction. Such a relief, for us both.

But the one that really stayed with me was a young woman carrying a red-faced squally baby up the driveway. She knocked at the door, telling me she had broken down outside and could she use my phone to call her boyfriend to pick her up. She didn’t have a phone, she said.

The woman dialled a few numbers on my phone but couldn’t get through to anyone. Her hands were shaking so I took the baby, fed and watered it, and then offered to ring the number. She said she couldn’t remember it and scrabbled through her backpack – and brought out a phone. It seemed the trees didn’t much like the old house either. Photo: Sally Hopman.

I was on good speaking terms with the local police – they used my driveway to nab people speeding past and retrieve stolen sheep – so I went into the other room and rang them, a little concerned about what else she had in her backpack. They arrived within minutes, greeted the woman by name and took her and the baby away.

I don’t think I’ll ever not think about that baby.

I loved that house. But it seems I was alone in that. No one wanted to admit owning it. It was the sort of place that looked like it was going to fall down. Imminently. And bits of it did.

Seems trees didn’t like the place either. It’s both a good and bad feeling when you come home to find men and women in orange overalls crawling over your home and a big tree, which was upright when you left, no longer that way. At least I was right for firewood for a few years.

Seeing the house again brought back so many memories. Good, bad and scary.

If only its walls could speak – they’d probably say put some bloody supports in or there’s going to be another fall.

2 Responses to BEST OF 2021: Home is where the heart is, even if it is broken

Loved the story even if after reading it before. Shows a lot of resilience living in such a place though I imagine it wasn’t a permanent affair.

Loved the story. Such a brave person to live there!

Myrna and David Ellery see themselves as custodians of the many houses they've bought, restored and sold over the years....
Read More

In the newspaper office, we all had scraps of paper, notes, clippings and photos attached to our desks. Our dogs,...
Read More