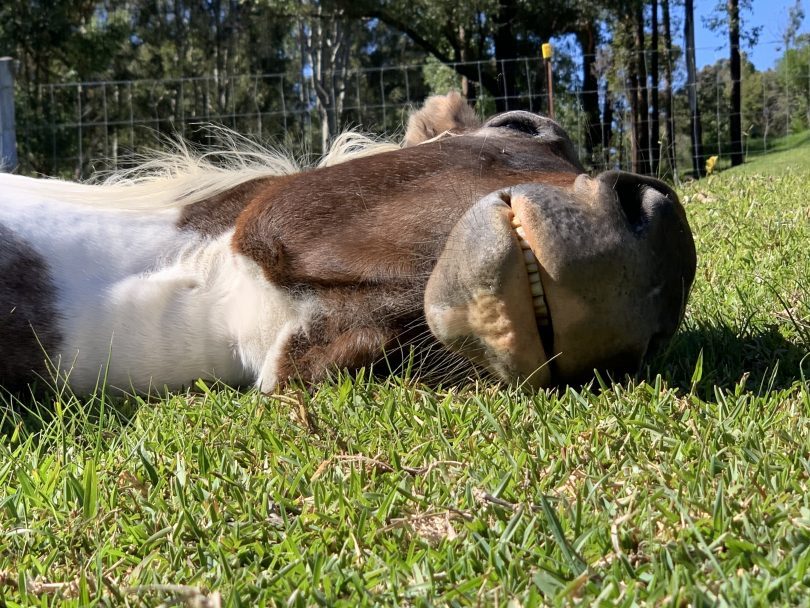 Molly the mare knows good grass when she eats, lies or sleeps on it. But as for pushing a mower, she just couldn’t cut it. Photo: Kim Treasure.

In the newspaper office, we all had scraps of paper, notes, clippings and photos attached to our desks. Our dogs, our partners, potentially Walkley Award-winning story ideas. Except for one bloke, a fellow I sat next to on Sunday nights when he was News Editor and I was his deputy.

He only had the one pic. It was a photo of a lawn, manicured to within a centimetre of its blades. It was so impressive it could have won a turf war. Perfectly symmetrical and a cut above the rest.

It was only after a few times sitting next to him that I realised all his pencils were sharpened to an equal point and were placed exactly next to each other, but that’s another story.

In the far corner of the lawn picture, you could almost make out his dog, just lying there. I don’t think it was dead because he would talk about it kindly in the present tense, but you could tell the dog wasn’t the centre of his photographic world.

It was clearly the lawn. It had been cut so sharply you could almost smell the blood. When your grass-cutting skills are decisively a cut above the rest. Photo: Sally Hopman.

When you live in the country, it’s not so much lawn as scrub. You don’t need a mower as much as you do a slasher. But the feeling’s the same and, if you’re lucky, so is the smell.

Mowing is one of those rare things, these days, that gives you an instant result. An instant good result. Push that mower on or let it self-propel you to wherever you’d like to go. And for those rebels among you, don’t even think about using the catcher, just let it go free.

What about ride-ons, you ask? Do you have to? How can you slave away in the garden if you’re sitting on something comfortable? Do you have to have a drink just because there’s a holder to put it in? Lights. What the? So you can mow at night? Isn’t first light on Sundays good enough for you? A variety of gears? Why? Just in case you find yourself accidentally mowing down Mt Kosciuszko?

I was a latecomer to the love of mowing. Middle-aged, poor and living on a country block, I didn’t have a lot of choice.

A friend lent me his mower and was kind enough to share his skills. He showed me how to turn it on – wrenching your arm out of its socket was a must when you pulled the thing out of the other thingy – and how to stop.

After he stopped laughing, he showed me it was best not to go around in circles that, actually, straight lines were better – unless you were into baby crop circles.

But I have to say I fell in love at first sniff. I could and did inhale it.

Then I discovered another bonus – it meant some special bonding time with one of my dogs. Spotted the Dalmatian. Don’t know if it was because she had such white paws, but the minute I dragged the mower out of the shed, she was there. Tracking me, up and down the paddock. Stopping when I did. Getting between me and the mower when I wasn’t stopping often enough to pat her.

She bonded with the grass so literally that her legs stayed green for days. Clearly for her, mowing was no black and white issue.

Grass seeds crop up in pet and livestock’s eyes, ears and lungs