The often brutal winters were made easier through the use of dog jackets (pictured here). Photo: Edwina Mason.

Throughout the past 10 years of their lives my niece and nephews have been regaled with stories of animals – mostly of the woolly variety – by me.

It started with lambs – Pogo, Alfy, MooLoo, Tigger, Piglet, Geronimo, Fearless, Ollie and Alfie. Then Little Bear – after Bear Grills. And Gherkin – with his wrinkled nose – who, as an adult, calmly self-adopted into my beloved flock one winter’s day. 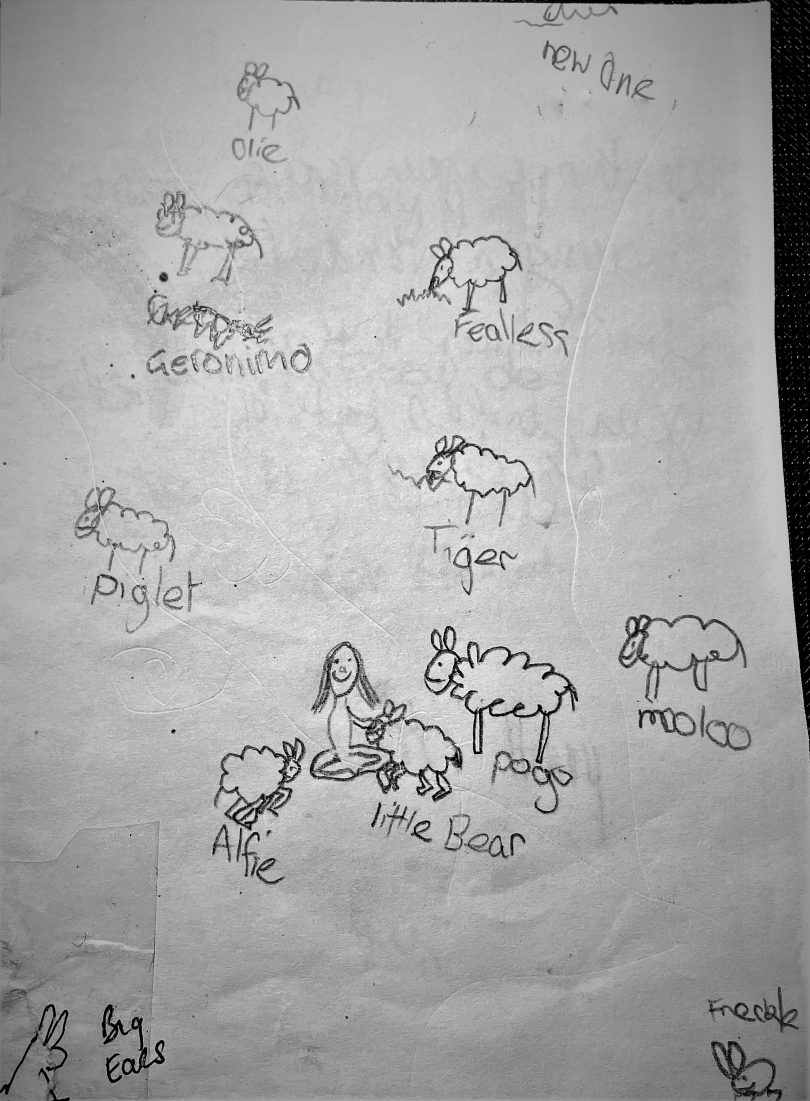 Back when the lambs were still cute enough to make it to the birthday card. Drawings circa 2011 by Wyatt, Henry and Tessa Watson. Photo: Supplied.

Even the guys in the local produce store here at Young got that. They always said when they passed on they’d happily come back as one of my lambs, such are the advantages of being part of this sacred mob.

I’m not alone. They also told me there’s a couple of burly farmers who each year came in to collect a set of special “life member” ear tags for their poddies , rendering them forever safe.

My head count grew annually each lamb season in July – even if I tried to wear blinkers to work – there’d be one lone lamb/twins standing somewhere, which would still be there on my return at night. An hour later I was out there, gathering it/them up in a towel and in a jiffy they would be in front of the wood stove being fed tiny syringes of warm milk.

Despite what others say, it was the foxes that did my head in. Loitering around fencelines, waiting to pounce. The frenzied yelping like banshees as they fought over carcasses wasn’t my idea of a peaceful night’s sleep.

Or the weather. One year I had 16 bleating lambs up in the woolshed, the product of a cold, gusty, wet weekend’s lamb rescue mission.

READ ALSO: Are private landowners destroying the courtesy of community access on the south coast?

That led to months of walking buckets of soap suds, cold rinse water and warm milk up to the shed morning and night helped by PA (Personal Assistant) due to her diligence in following me everywhere. Thankfully, 15 took to the multi-teated lamb milk feeder with relish. Except Frosty who HAD to sit on my lap as I fed him with a bottle.

The head count wasn’t helped by unfortunate visits from a very agile ram who seemed to leap fences in a single bound. Despite dragging him back down to his paddock daily with a horse halter, his visits resulted in two home births, witnessed by my niece who named the newborns Tessa 2 and Napoleon.

Then Paw Paw was abandoned by his mother because his rear hoof was turned in. David Woodward, the local vet, didn’t laugh when I took him in. Due to a renovation, I was homeless while Paw Paw recovered from the surgery to fix his foot, so he became quite used to travel in the back of my SUV, I’m sure to the amusement of everyone he peered out at from the back window.

To this day he remains the most expensive wether in the district’s history.

Days would be spent in the paddock with the mob who would sit around me either burping, pawing at me or chewing the hair of their odd sheep mother.

Geronimo was the largest by far and the jumping up got to be a bit challenging when he reached full size.

Clementine eventually had to be thrown out of the Polaris. She got too big for the foot well and refused to believe she was a sheep, even turning her toe to mustering. It was a bountiful year when 16 lambs joined the mob. Photo: Edwina Mason.

And Gherkin returned to the wild in the way he joined us – with one look backwards and then onward to another mob.

I spent months walking across paddocks searching for him. I reckon if I am heard in my more senior years calling for Gherkin that’s the reason.

The nieces and nephews have passed the age where any of this is cute. These days they roll their eyes and I get bombarded with accusations of lamb napping. This was an evil rumour started by my brother, aghast at my growing mob.

Need I remind him of his particular attachment to Ernie Dingo who lived to a ripe old age thanks to his lamb rearing efforts.

The oldest of my mob is now 11 grand old years, they still follow me wherever I go until tufts of grass over yonder look lusher. But they never fail to deliver a lovely fleece each year that doesn’t win at Bribbaree Show but at least pays the car rego.

Life on the land provides daily lessons. In the realm of lamb rearing it’s patience, compassion, resourcefulness and responsibility. In return, we’re gifted an understanding of the sensitive, intelligent, devoted individual nature of an animal that’s frequently lost to mob mentality.

Fantastic, thinking out of the box with compassion thrown in. We have two cows we hand raised, haven’t bred because I know I won’t want to sell their calves to slaughter. So they lead a life of leisure. They are friendly, affectionate and playful (which can be scary! 😆)
People scoff at us, but probably have spoilt dogs, cats, horses, goats etc. No reason to breed and/or kill animals if you don’t want to. Cattle and sheep have as much capacity to be a companion animal as any of the more common species. It’s just that unfortunately, that’s not their lot in life. Our two just got lucky.

Peter had a little lamb – ewe should read all about it

It looked to be only slightly bigger than a large ball of wool. A half-frozen lump left in the paddock by...
Read More