The ‘exotic weeds’ that saved a Braidwood truffle forest from destruction 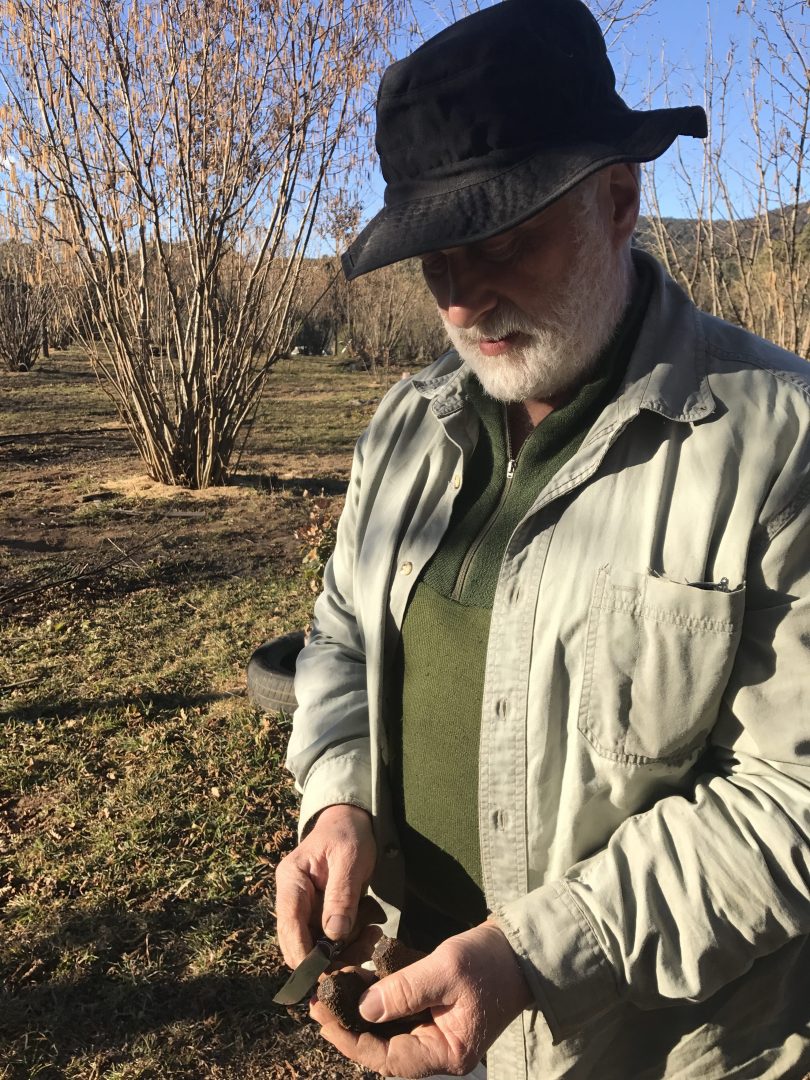 Peter Marshall has never been afraid to stir the pot. He reckons that decades of experience as a silviculturist, some impeccable qualifications in forestry and a globally successful truffle-growing operation back him up pretty solidly.

Peter has long argued that a focus on exclusively native planting is misguided: he goes as far as to call it a “nativist pogrom”, and he says that when the Currowan fire hit his property Terra Preta, near Braidwood, the proof was in the fire’s behaviour.

There was plenty at stake: Terra Preta is one of the most productive truffle operations in Australia, exporting over 300 kg of high-quality black truffles annually to chefs in Paris, New York, Los Angeles and Tokyo from the shadow of the Monga Forest.

For decades, Peter has planted a mosaic of trees including his truffle bearing hazelnuts and oaks, but also poplars and willows, and up to 30 bamboo varieties. His aim is to restore the property’s capacity to retain water at all levels, moving gently through the soil profile rather than streaming off degraded, heavily compacted land.

Peter takes up the story via email: “For months we had been working ourselves silly to get Reidsdale Valley ready, cutting access to Monga Park and shifting fuel away from the forest edge. The Currowan Fire came screaming at us out of Monga forest [creating] feelings of imminent doom. I thought we would lose everything.”

But what happened next surprised everyone, including the local firefighters.

“It hit the bladed lines then the oaks plantation, dropped from crown to ground and went silent. Then out,” Peter says.

“Experienced firefighters were speechless with amazement, then swung into their trucks and headed for the next crucial point. Our deciduous forest released firefighting resources to operate at critical points elsewhere.”

Peter’s reasoning is that even a fire roaring uphill with a good draft will pause when it hits green trees. He estimates that a mature poplar, for example, is carrying 100 to 200 kg of water. As the fire and the trees interact, there’s a burst of flash evaporation from the greenery that absorbs heat. Peter says updraft wind will drop almost instantly under those conditions.

The wind controlling effect of banked deciduous foliage also worked to dramatically slow the fire’s spread and, three rows in, the blaze became controllable with groundwork and shovels.

“Trees [were] exploding and falling up in the eucalypts for days. A4 [-sized] chunks of burning bark [were] falling on us. Nearly all were self-extinguished by the boundary layer, the rest we swatted. Pretty work at night,” Peter says.

The irony for Peter is that his poplars began as rooted cuttings from trees marked for destruction when the ACT Government determined the species were weeds.

“A designed fire retardant landscape worked as planned. Silvicultural decisions made 30 years ago and exotic tree genetics we saved from the nativist pogroms saved our valley. I am amazed, too.

“Our native forest on Ironstone Hill … was saved from the fire by the bands of deciduous trees. It is now full of wildlife seeking refuge.”

Peter is a firm believer that the “native good, exotic bad” message has got out of hand among land-carers.

He’s deeply critical of what he describes as a belief that willows, poplars and oaks are invasive weeds, arguing that “random mixes of ‘natives’, many from a thousand kilometres away, have no silvicultural logic”, and describing wide belts of native planting running east-west as “frightening fire wicks, threatening to outflank firefighters at any time”.

At Terra Preta, the use of non-inversion tillage techniques has restored the soil’s ability to hold water, while biochar produced from coppiced biomass restores the soil’s fungal communities.

Peter points out that in pre-European times, these relationships were nurtured by massive numbers of now-extinct small marsupials, from bettongs to woylies and potoroos who trawled the forest floor looking for native truffle species and churning over soil and mulch. Forest floors were constantly damp and continually composting as a consequence.

“The situation is dire,” Peter says in reference to our degraded and water-resistant landscapes.

“We don’t have another 20 years to waste on discredited ideology. Native or exotic trees, my family will use every tool available to protect our land.”

Wonderful to read this. Wish the local councils would listen.I’ve been saying the same thing for 12 years since coming to Sydney. I love native plants, but we need a mix of native plus European for the most effective street trees because of their resistance to fire and wind. I often see limbs dropped from gums, or gums blown over at the roots in my local park because they were never meant to be out on their own in the path of strong winds, they are bush trees. One only has to look at trees like London Plane (amazing performer as a street/shade tree)- so hardy and beautiful. Many of them are also much longer-lived than natives.

Brilliant observation and practice Peter… Yes it amaxes me that many Australians don’t get that Eucalyptus forests encourage fire and the logical approach is to plant other often exotic trees as fore retardants.. This is an approach permaculture practitioners use too like David Holmgren

Definitely keep exotics. Fed up with the push for only natives. Very shortsighted and very stupid for reasons above.He obviously knows his stuff!!.

Brilliant article – and highlights the stupidity of some of our ideogical ‘Greens’ that should know better. The point about feral animal control is also vital, as the eco cycle of our native speciaes with the landscape is fundamental. You only have to look at the wonderful work done in the NT with feral proof fencing and the reintroduction of native species onto the landscape – it is like looking at an adjacent lunar landscape in comparison.
See link to video:
https://www.australianwildlife.org/newhaven-wildlife-sanctuary-stage-1-declared-feral-free/

This was the same results as in Victoria during the 2007 fires. Places with deciduous trees survived much better. We have always grown poplars and willows around one paddock specifically to help protect cattle in times of fire.

I remember the poplars at the Cotter still standing after the 2003 fire. Remarkable.

Seems very sensible to me.

Fabulous story and article, timely and essential viewing for every one who wants to “pull out” another willow or poplar from of our environment. Many so called “weeds” have an array of important jobs to do. More of this information needs to be more widely spread and accepted. Regenerative agriculture is gathering a large following, because it works! Proof at work via ‘Mulloon Institute’, and ‘Tarwyn Park Training’ to mention a few.]

A year after fires burnt their Braidwood property, Peter Bowie and Tracia Milton have watched floods wash away cattle and...
Read More

Gary Poile's entire business has been plunged into lockdown. As of 6 pm Sunday (26 June), an emergency order was...
Read More