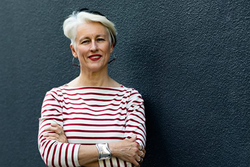 Genevieve Jacobs has been a journalist for 30 years, working in print and radio. Her career began with rural newspapers on the South West Slopes, she has freelanced for national magazines and spent a decade with ABC Radio Canberra.

She works with a wide range of organisations including the Tara Costigan Foundation, and Gift of Life ACT, sits on the ACT’s advisory committee for Historic Places and the boards of the National Folk Festival, Canberra International Music Festival, M16 artspace and the Conflict Resolution Service.

Genevieve has an enduring interest in building community, and creating discussions that include us all. And she still loves nothing better than a good yarn.

Amid growing anger over The Australian War Memorial's plans for a $500 million expansion, the Memorial's director has directly addressed concerns. Matt Anderson has responded to pointed criticism in an open letter to all members of the House of Representatives from the Institute of Architects' 2018-19 national president Clare Cousins. Her criticism centred on the threat to demolish Anzac Hall, calling its destruction wasteful and...
Read More

Region Media, publisher of the RiotACT and About Regional news sites, has drawn on some of the most influential players in corporate Australia to be the first appointments to its new advisory board. Region Media has sought out inaugural members with a diverse range of high-level skills to provide strategic advice and help guide the company's growth. The first appointees...
Read More

UPDATE 7:45 pm, August 9: Sandbags are being laid in Ford and Vulcan Street businesses in Moruya as the Moruya River rises to an expected peak of 2.9 metres by around 8:00 pm tonight. Moruya CBD business owners have been told by the SES that they will no longer be able to access any business that is situated to the...
Read More

Senior regional journalist and editor Kim Treasure is joining Region Media in the role of content director as the media group continues to expand across the NSW South East. Most recently, Kim was Australian Community Media's managing editor for NSW South with responsibility for around 40 mastheads. Her role will be to oversee content and staffing across the RiotACT, About Regional,...
Read More

The long-awaited release of the Palace letters between Governor-General Sir John Kerr and Buckingham Palace, held at the National Archives in Canberra, has revealed that the Queen was not directly informed about Kerr's decision to dismiss Prime Minister Gough Whitlam in November 1975. And depending on how closely you read the very carefully worded responses from Her Majesty's private secretary...
Read More

Bega Valley Shire Council will ask the NSW Auditor-General to review its financial position and examine what general manager Leanne Barnes says is a "challenging financial position" after an extraordinary meeting to address the situation this week. Council has faced trenchant criticism from some quarters of the community due to its most recent audited financial statements showing a net consolidated deficit...
Read More

Rob de Castella ran all over the world representing Australia. But Canberra's greatest marathon runner says the work he's doing right now with the Indigenous Marathon Foundation is the most important he's ever done. Not that it's easy in the age of COVID-19: at this time of the year, Deek would usually be on the Gold Coast, training his 16-strong...
Read More

It was a curious election count watch on Saturday night (4 July) as the ABC's Antony Green tried to make sense of the results in Eden-Monaro. The Labor vote was down, the Greens vote was down, too, but the ALP's Kristy McBain was clearly winning by a slight, but steady, margin (and has claimed the seat). What was happening? And...
Read More

UPDATED 2.30 pm, July 5: Labor's Kristy McBain has claimed victory in Eden Monaro as persistent postal and pre-poll voting trends mean it is almost impossible for the Liberals to win the seat. It's a victory for preference voting and, possibly, contrary minded locals who chose to vote across party lines. The victory also comes with a notable dip in...
Read More

Eden-Monaro election races have always been tight. Never more so than in the by-election on Saturday, 4 July, when 14 candidates will line up in a seat held by Labor with a wafer-thin margin. Given that Liberal candidate Fiona Kotvojs came within 1500 votes of taking the seat from well-respected incumbent Mike Kelly in 2019, it's very likely the contest...
Read More

Just days from the Eden-Monaro by-election, what is motivating voters? Despite the Federal manoeuvring, it's unsurprising to discover that many people are strongly focused on local issues. Region Media journalists Edwina Mason, Alex Rea, Karyn Starmer and Dominic Giannini asked voters in Tumbarumba, Tumut, Narooma, Bega, Braidwood and Queanbeyan what was on their minds ahead of the poll on Saturday,...
Read More

Bega Valley Shire Council Mayor Sharon Tapscott has denied suggestions general manager Leanne Barnes has lost the confidence of council, characterising them as "grossly inaccurate" after the June council meeting. Ms Barnes's performance was assessed at the halfway mark of her current three-year contract. Reports made in closed session indicated that while her performance met and exceeded expectations in a...
Read More

How do you make up your mind when you walk into the voting booth? On Saturday, the voters of Eden-Monaro will be choosing a replacement for Labor's Dr Mike Kelly in an election that the nation will be watching, and About Regional is giving you a unique opportunity to hear from each of the candidates. Would-be politicians and journalists play...
Read More

For the National Gallery's visitor experience coordinator Tristan Duggan, there is both joy and profound relief in the latest announcements about opening conditions at the NGA. An easing of COVID-19 restrictions means up to 100 visitors can now pre-register for timed ticket entry every 30 minutes. Priority will be given to visitors who pre-book and walk-up entry will be allowed...
Read More

It's the by-election being watched by a nation, and the field of candidates is the size of the Melbourne Cup. But what do actual voters think are the key issues in Eden-Monaro? About Regional is asking you to nominate the issue that matters most to you, and we'll give the candidates an opportunity to respond. The Federal electorate is famed for...
Read More
1 2 3 … 12