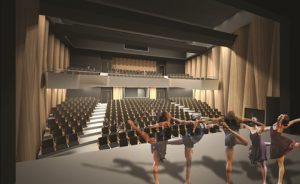 Built on the site of the old Goulburn Town Hall, the centre will be a state-of-the-art theatre able to seat 400 patrons.

Beginning in late 2019, construction has been highly complex due to the narrow boundaries of the site and the heritage-listed status of the existing building.

Goulburn Mulwaree Council Mayor Bob Kirk is excited at the prospect of the centre’s opening as a “once in 50 years project” for the region.

“The adaptive reuse of our old Town Hall for a 400-seat Performing Arts Centre will revitalise this important building in the CBD for public use, and will have ongoing wider benefits for our economy and CBD,” he said.

“Most importantly, the Goulburn Performing Arts Centre will offer our local community access to outstanding arts and culture offerings regularly throughout each year, which would not have been [available previously].

“This project has been built for our community. We will attract national and international calibre performances, but it is also important our local performance groups have the opportunity to utilise GPAC, and they will.”

Definite plans for the 2022 season are yet to be released, but they will include the following:

The 2022 season launch will be held in April.

The Goulburn Performing Arts Centre is hopeful of luring a number of major performing arts organisations which tour regional NSW, including The Australian Ballet, Sydney Symphony Orchestra and Bell Shakespeare. However, their tours are organised two to three years in advance and they were all unavailable for 2022.

In discussions, they all expressed a desire to perform in Goulburn in the future.

Construction of GPAC was delayed by approximately one month due to the COVID-19 pandemic, but it has progressed well in recent times.

The centre will have an enormous impact on the local arts community in Goulburn and the greater region.

Unfortunately cuts in funding have meant some poor decisions have been made. No Orchestra put for musical theatre is a huge error