Around 120 people turned out for the Pack the Pool event in Batemans Bay in November 2017 arguing for a 50m pool to be retained. Photo: Fight for Batemans Bay 50m Pool Facebook.

Geotechnical surveys at Mackay Park have begun as a final design for the much anticipated Batemans Bay Regional Aquatic, Arts and Leisure Centre moves forward.

Batemans Bay residents and visitors might notice equipment on site for the next two weeks as Mogo-based Sea to Summit Drilling conducts borehole testing to assess ground conditions.

The work is being overseen by the NSW Government’s Public Works Advisory, which has been appointed to help manage the design and construction of the new centre.

“This is a large, multi-layered project, and we will benefit from their depth of experience and established network of professionals from all fields,” Cr Innes says.

Meanwhile, Council is finalising tender documents for the centre’s design after inviting Expressions of Interest from architects in February. Four shortlisted architects are expected to be invited to submit tenders for the project in the second half of June.

“We’re powering ahead with the planning process to ensure we’re as ready as we can be to build when the funding outcome is known,” the Mayor says.

“We already have $26 million in the kitty thanks to NSW Premier Gladys Berejiklian and Bega MP Andrew Constance, and we’re keeping up the pressure on the federal government to come to the party as well.”

The cultural facility, on the same site, will include a purpose-built exhibition and performance centre, as well as workshop and storage space that will serve the region’s 18 art, dance and theatre groups.

An extra $20 million is required to fulfil the vision; Council expects to hear the outcome of further grant applications by mid-2018. 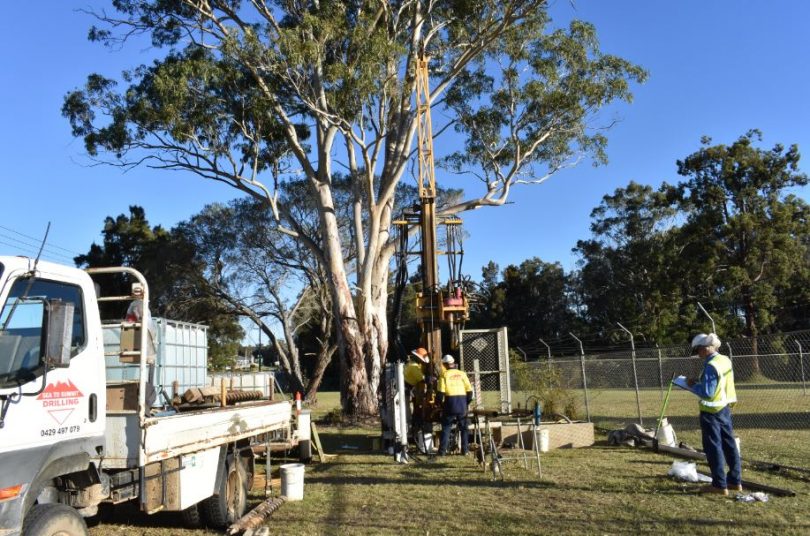 “After more than 20 years of Batemans Bay residents calling [for] and fundraising for the development of an indoor aquatic centre and advocating for purpose-built arts and cultural facilities, we are now so close to seeing it happen,” Cr Innes says.

“We are now more than halfway to achieving our goal. I am confident that our other funding applications to the Australian Government will be just as successful.”

Some in the community have been critical of the plan to replace the existing 50-metre pool, which was opened in 1966, with a 25-metre pool. They continue to agitate on the issue with a further public meeting called for May 29.

Spokesperson for Our Town Our Say, Coral Anderson, says that 120 people attended the last meeting on February 15.

“However, their formal resolutions on the 50m pool issue were totally ignored by Eurobodalla Shire Council.

“Since then “Fight For Batemans Bay’s 50m Pool”, whilst applauding the concept of a multi-use aquatic and leisure centre at Mackay Park, has been indefatigable in its efforts to educate Council on the needs of more serious swimmers in Eurobodalla Shire,” Ms Anderson says.

The Our Town Our Say public meeting is on Tuesday, May 29 at 5:30 pm in the Batemans Bay Soldiers Club. 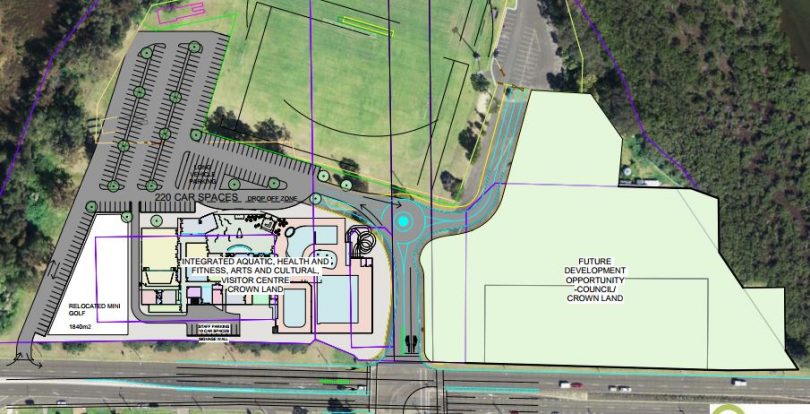 Cr Innes says options for long distance lap swimmers are being discussed and points to an idea raised by members of the Batemans Bay Swim Club.

“The provision of an ocean netted area may be an appropriate and more cost-effective alternative to the retention or refurbishment of the existing 50m pool at Batemans Bay,” she says.

“It would certainly be more affordable than including an indoor 50m pool in the proposed centre.

“It would also potentially be a great tourist drawcard as are similar netted swimming areas around Australia. I think this is an option worth exploring and discussing with our community.”

The Mayor says the Mackay Park Sunset Committee is being consulted during the process and is currently working with Council on developing a plan to engage with the community throughout the next part of the design phase.

Acquatic Centres in other areas do well. The Bay needs this.

The photo at the top of this story was taken in November 2017 at an event organised by Fight for Batemans Bays 50m Pool, when over 120 people jumped into the shallow 25m end of the Batemans Bay 50m pool and packed the pool. As you can see there is very little room. Can you imagine people wanting to swim laps, train for events, participate in classes and swimming club training taking place in a 25m pool?

Mayor Innes how, in a growing community, currently with over 80% of the Eurobodalla population around Batemans Bay, is a 25m pool adequate or acceptable?

Mayor Innes and Eurobodalla Shire Council you may have a ‘vision’ of a new Aquatic/Arts Centre and be ‘powering ahead’ with your plans but you are doing so WITHOUT the community behind you. WE DO NOT share your ‘vision’ of a 25m lap pool in the aquatic/arts centre, it will exclude pool users and is a a huge backward step for the Batemans Bay community.

Moreover you decided that a 25m lap pool will replace the 50m pool in the Aquatic/Cultural centre failing your Council’s Community Engagement Framework that says – ‘A projects level of impact relates to how significantly a proposal or action will affect community stakeholders…defines the degree of impact in five levels …on the assumption that any project, issue, service or action will have some impact on the community.’ AND ‘In the case of the 50m pool for ‘the removal of a shire wide service/provision of a regional facility the Level of impact is 4: MODERATE – HIGH and requires Collaboration – ‘To partner with the public in each aspect of the decision including the development of alternatives and the identification of the preferred solution.’

Mayor Innes there was NO partnership with pool stakeholders to develop alternatives and identify a preferred solution during the planning stage for the size of the lap pool in the aquatic/arts centre. We do not support your plan to demolish the 50m pool, that has been used by whoever wants to use it for over 50 years and replace it with a 25m pool that will exlude swimmers. Please stop insulting our intelligence!

Liz Innes has broken her promises to her community & failed to justify her claim that ratepayers do not want & can not afford a new 50 m pool . A 50 m pool is affordable in fact it is comparable to her unilaterally included 10 lane
25 m pool so why is there a problem Liz ? It’s pride . She can’t admit that she got the Mackay Park Project Concept wrong from the beginning . She has admitted that she failed to consult the pool users .
Also Narooma looms as the preferred 50 m pool centre as stated in Eurobodalla Aquatic Centres
Strategic Plan . 7% of Eurobodalla’s population
reside in the Narooma area while 78% live in the Bateman’s Bay region . Eurobodalla welcomes 1.5 million tourists annually most of whom hang out in the north of the Shire. She did not even consult the Batemans Bay Swim Club yet alone thousands of stakeholders before she moved to demolish our 50 m pool . A new 50 m pool for Batemans Bay was never on her agenda . Consultants Otium were directed to delete a 50 m pool as an option right from the start . The Brown Report states that Narooma 50 m pool is
in a worse condition than Batemans Bay’s but the Shire Councillors have been instructed to toe the bureaucratic line ie . preserve The Narooma Pool & bulldoze the Batemans Bay Pool . This seemed to happen after The Hanging Rock site was knocked out of contention for the new Aquatic Centre . When the focus was moved to the Bowling Cub & the Swimminig Pool Complex
our 50 m pool disappeared . Even the Batemans Bay Indoor Aquatic Club that had been lobbying for a new Aquatic Centre had allegedly been threatened into accepting a 25 m pool . This would be more expediently processed as it would be supported by MP Andrew Constance in his timely push to award a significant state government grant of $46.3 million to the Mackay Park Project as a pork barrelling vote catcher in his electorate . Andrew has announced a $26 million advance grant but nothing is signed off & a glaring $20. 3 million shortfall exists . Andrew was emphatic at his meeting with us that he would have the bulldozers on site at the Aquatic Centre before March around state election time . Well that won’t be happening because the grant money hasn’t officially happened . It’s allegedly all hot air ?
There is still time to swap the inadequate 25 m pool for a 50 m pool . Liz Innes & her spin doctors have failed to convince her electorate that she supports them as she doesn’t even consult them & is more about creating conflict rather than building a positive symbiotic relationship with her local community. Power & control has blinded her to seeing what is possible . A sea pool was not supported by the Batemans Bay Swim Club this is a distraction a diversion Liz & you know it . Someone allegedly said “they will get what we give them not what they want “ of course this has come to fruition .