The ocean plays an integral part in why many of us choose to live on the Far South Coast of New South Wales.

This is a coastline of mostly wild and pristine places, with thousands of hectares of National Park, hundreds of beaches and dozens of estuaries, rivers and creeks. And an incredible array of ocean wildlife that is easy to enjoy and engage with. There is abundant wildlife evident beside the whales – dolphins are always around. Photo: Pete Hannan

The ocean is home to the greatest abundance of life on our planet, millions of plants and animals—from tiny single-celled organisms to the gargantuan Blue Whale, the planet’s largest living animal. If you can handle it, whales are more active in rougher weather. Photo: Pete Hannan

Currently, thousands of whales are cruising down the ‘Humpback Highway’ at our front door, on their yearly migration back to summer feeding grounds in Antarctica. Up close and personal. You can really study the anatomy of humpback whales from this distance. Photo: Ron Webb

Many of these whales are bringing their young calves with them on the long journey, stopping to rest, play and feed in our coastal waters, often very close to shore. Once reduced to a just over 100 individuals in the 1960s, the Humpback population has recovered steadily over the years since Australia’s ban on whaling in 1979. From now until the end of November, the Sapphire Coast is a perfect place to get out on the ocean and catch sight of these amazing creatures as they spy-hop, mug and breach in their joyous ways, seemingly showing off for and often approaching the boats for a look at us. Humpback Whales are renowned for their aerobatic behaviour. It’s not unusual for them to leap out of the water, roll in the air with their huge pectoral fins outstretched like wings, and crash spectacularly back into the water – behaviour known as breaching. 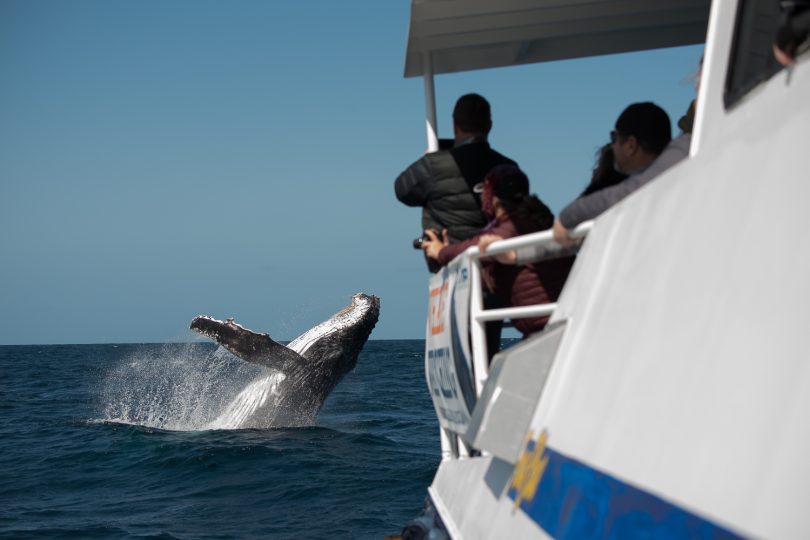 In under 10 minutes you reach the Humpback Highway. Photo: Ron Webb

They can travel up to 8 km per hour, but during their long migration south they average only 1.6km an hour, resting and socialising along the way, which is great for us humans that want to enjoy the show. 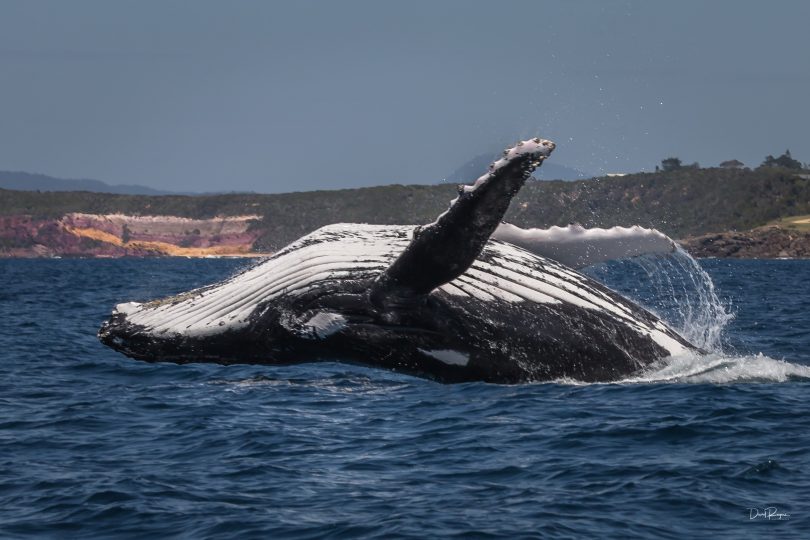 Breaching Humpbacks blast out of the ocean and crash back in to the water. Photo: Dave Rogers

Twice a day, from mid August to late November, Merimbula Marina’s vessel ‘True Blue’ makes its way out through the Merimbula Bar and heads into the big blue. On board are tourists and nature lovers, and always a handful of avid photographers. You can spot them, an aloof group of humans, standing quietly together, eyes fixed on the ocean, cameras and lenses held at the ready. The images produced by these ever present whale-spotters are spectacular, but even snapping away with your phone can reap rewards. 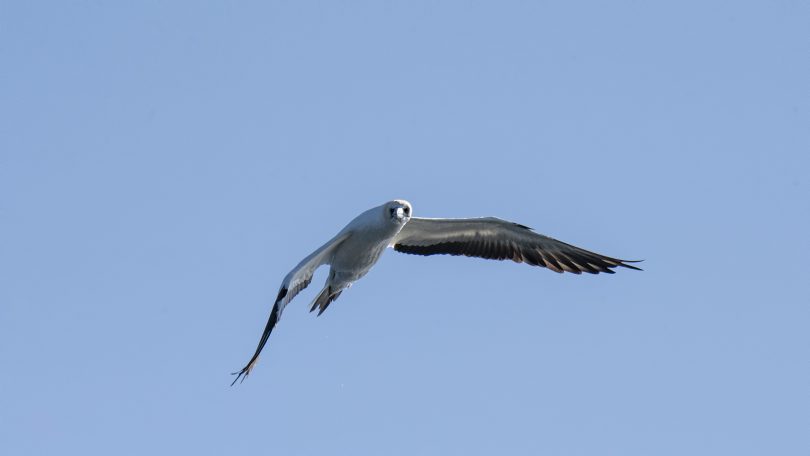 Seabirds are also a feature of a day on the Sapphire seas. Photo: Pete Hannan

Merimbula Marina is a family owned and operated business. Jessica and Simon Millar and their kids Mikah and James, along with their great crew (including famous whale spotting kelpie Rosie) believe in responsible and respectful whale watching practices. They also have a deep love of the ocean and all its amazing creatures and enjoy sharing this with passengers – “our guests,” Jessica says. Up close these pectoral fins are impressive. Photo: Pete Hannan

I asked Jess if doing this twice a day, for around three months every year, if she and the crew get tired of the whales.

“No, I think if you got tired of the displays and all the images, you’d have to take a good, hard look at yourself!” “Don’t take your eyes off the ocean for a second”. Photo: Dave Rogers

Local photographer Pete Hannan says “I love being out at sea, and having the opportunity to see and photograph not only whales but the birds, seals and dolphins close up as well.”

“Going out with a professional outfit like Merimbula Marina has given me wonderful opportunities to observe these beautiful animals.” The power and majesty of a Humpback up close. Photo: Pete Hannan

“They are both exciting and technically challenging to capture. The photography challenge is to capture all the different behaviours, from a simple blow to a full-on airborne breach.” Jess ponders “it’s still amazing after all these years, the close encounters, the spy-hopping and mugging and breaching, we don’t get tired of it.” The more you look at the whales, the more beautiful they are. Photo: Wayne Reynolds

Photographer Wayne Reynolds is on the ‘True Blue’ most days. Wayne is an inspiring whale photographer and has been capturing whale images out of Merimbula since 2003. He has thousands of amazing images but these ones are shots from the last few days! Dave Rogers has a tip for those wanting to photograph these amazing giants – “don’t take your eyes off the ocean for a second!” A rare sight amongst the humpbacks, a Dwarf Minke whale. Photo: Ron Webb

The Millars also run whale cruises in Sydney, and Jess says “our Sydney cruises depart from Darling Harbour and are a wonderful way to see both the sights of Sydney Harbour and the majesty of the Humpback Whale.”

“It’s pretty special to be able to hang out with whales in Australia’s largest city.”

We hope you enjoy these images, but please don’t just leave it here, get out on the water and experience this for yourself. Some images truly portray the power of the humpback whale. Photo: Wayne Reynolds Having a whale of a time, just off Merimbula’s Short Point. Photo: Dave Rogers

Thank you to Merimbula Marina for their support of About Regional’s Festival of Open Minds in September.