No sure-fire solution for rampant deer Professional shooter Rob Gallina has killed 370 deer in one outing while aerial culling over the Monaro district. Generally he works through the night for farmers shooting deer with .243 and .308-calibre rifles. On the ground one night, he shot 68 deer.

Mr Gallina says numbers have exploded in Canberra. He says government agencies desperate to cull rampant feral deer numbers in southern NSW could resort to aerial baiting with 1080 poison. He describes this as brutal, cruel and likely to wipe out many native animals. Comprising of sodium fluoroacetate, 1080 (pronounced ten eighty) is an odourless, tasteless white powder that is diluted with water to concentrations specific for the species being targeted.

Mr Gallina says a multi-million-dollar baiting proposal was put forward for the Riverina and Monaro regions, but the professional shooting industry had put forward an alternative cheaper scheme. He formed a company some years ago, Australian Feral Animal Control and Management Services, and shoots and traps deer, kangaroos, pigs, rabbits and foxes. 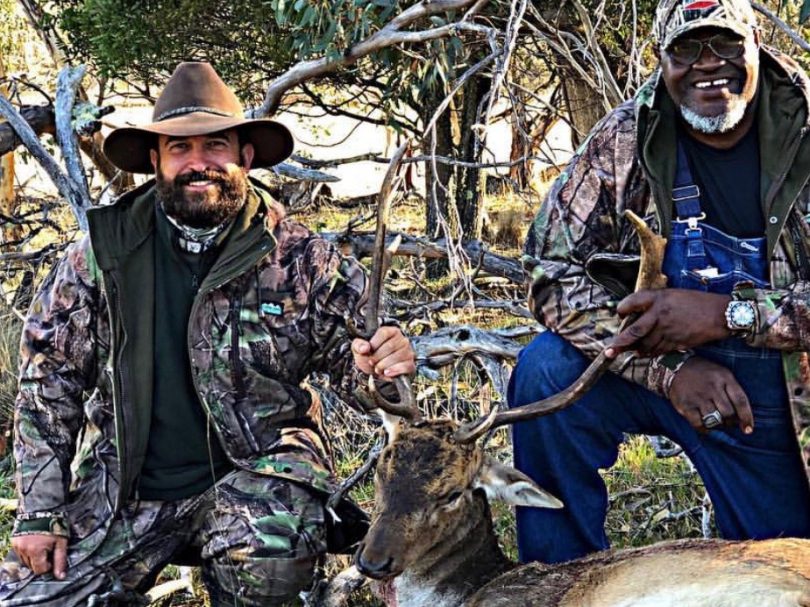 “The deer program we have proposed is about $6 million, to have 30 shooters out there in the bush every single day helping farmers, getting into national parks, culling back numbers, not just for deer – all feral species in general,” Mr Gallina says.

“It is a lot more cost effective, less painful, more ethical. Why would you contemplate spending two to three times the money when you can have professionals do it, and we can harvest and use the meat?”

He says bush and farm land from the Southern Highlands, throughout the ACT region, Kosciuszko and into Victoria are literally full of deer.

“We have done a lot of culling around Canberra, we have seen 30 to 70 deer in a mob,” Mr Gallina says.

Land managers have used 1080 for wild dogs in devices known as Canid Pest Ejectors that lodge the bait in the dog’s throat. In New Zealand, 1080 is used to control deer numbers. NSW Department of Primary Industries says it did not have any proposals for the use of 1080 to control deer.

On its Pestsmart website, Invasive Animals says 1080 is the most efficient, humane and species-specific pesticide available for declared pest animal control in Australia.

Mr Gallina says authorities are at a loss as to how to tackle deer numbers.

“A lot of people talk about fixing it in politics, but no one actually does anything about it. A lot of the funding goes on red tape,” he says. They damage crops, vineyards, orchards, feedlots, menace farmers and attack livestock. “The stags are piercing livestock with their horns. These animals become territorial over their herds, they don’t like anything near them,” he says.

Eastern grey kangaroos are in bigger numbers in the ACT than many people believe, and are a wasted resource, Mr Gallina says. Kangaroos he shoots elsewhere are sold to processors, and he has hosted chefs on shooting trips.

“Farmers are now allowed to use the meat, we take people out in the bush, we show them the ethical way we do things, the next day we butcher the animals, show people how to cook them. I had a celebrity come out, he said he had one of the best meals he has ever eaten. We have had chefs come out to Australia and they say when can we get this on the menu?”

2 Responses to No sure-fire solution for rampant deer

Don’t use 1080 it kills everything. Provide jobs manage with shooters, keep ecotoxins out of Australia. NZ is saturated in 1080 and still we have the same pests but dying native species. Don’t do it!

No mention of horses

Rising numbers of fallow deer in ACT nature reserves have prompted Parks and Conservation to order a cull of the...
Read More

Changes to the type of licence required to shoot deer have come under fire from the association that works with...
Read More