Margaret Bush of Jerrawa shows off the World War I photo album she uncovered while going through her late parents’ belongings. Photo: Michelle Kroll.

When it comes to family history, the Bush family of Jerrawa could write a book – and they have, several of them.

It’s hardly surprising when you consider that at the first Bush family reunion, organised in the tiny village near Yass (pop: 73) in 1985, more than 5000 people attended. In later years it was sensibly moved to Yass.

Today, for family matriarch Margaret Bush, it’s time for the other side of the family to have its day in the sun.

Whilst going through a box of items belonging to her parents, Lyla Ledger and Charlie Sainsbury, Margaret uncovered an old photo album with the title Sunny Memories inscribed on the front.

It’s one of those old-school photo albums, complete with captions written in white ink, meticulously cut-out frames for the pictures – a book clearly reminiscent of a long-gone era.

And other than what looks to be minor water damage in one corner, the old album looks to be in pretty good nick – not bad for something more than 100 years old.

But when Margaret opened it, she couldn’t believe her eyes. It was an album featuring images from World War I, more than 100 years ago, showing faded photographs of soldiers – and camels. There was even a caption referring to the back of the “Spinks” in Egypt.

“I couldn’t believe it when I first opened it,” Margaret said. “I don’t know for sure, but I think it may have come through my mother’s side of the family.

“I knew a lot of family on the Bush side had gone to war but I didn’t know a lot about the other side of the family, especially going right back to World War I. But that’s definitely what this album is all about. The inside cover of the old photo album can be traced to World War I campaigns in Egypt. Photo: Michelle Kroll.

“My daughter Sally has been one to do all the family histories on the Bush side but after seeing this album, I decided I wanted to do something for the other side of the family.”

Margaret said when she found the album, which she thinks came with a collection of items she had stored after her parents passed away, she thought it interesting but didn’t really examine it, deciding to do so when she had more time.

When she did get it out again and saw the old photographs she was “really excited”.

“My side had been a bit neglected, so I wanted to do some research into the Sainsburys and the Ledgers,” she said.

“I had no knowledge of the Egyptian campaign.”

Around the same time she discovered the album, Margaret said she had been reading a book called We Have Not Forgotten – Yass District War 1914-1918.

“In this book there was a reference to a Lance Corporal L.J Ledger, 35th Battalion, Yass District School. In Loving Memory,” she said.

“Then later on, I heard that there was a dedication in the Church of England here in Yass to a Leslie Ledger who was killed in France on 12 October, 1917.”

Although Margaret believes Leslie may be related on the side of her great grandfather, Samuel, she has no memory of her parents ever talking about family members fighting in World War I.

“We just never spoke about it,” she said. “That’s why all this is so intriguing.”

But now she has the proof, Margaret is curious as to how the album came into her parents’ possession. Sadly all the family members who could tell her the stories have passed away. 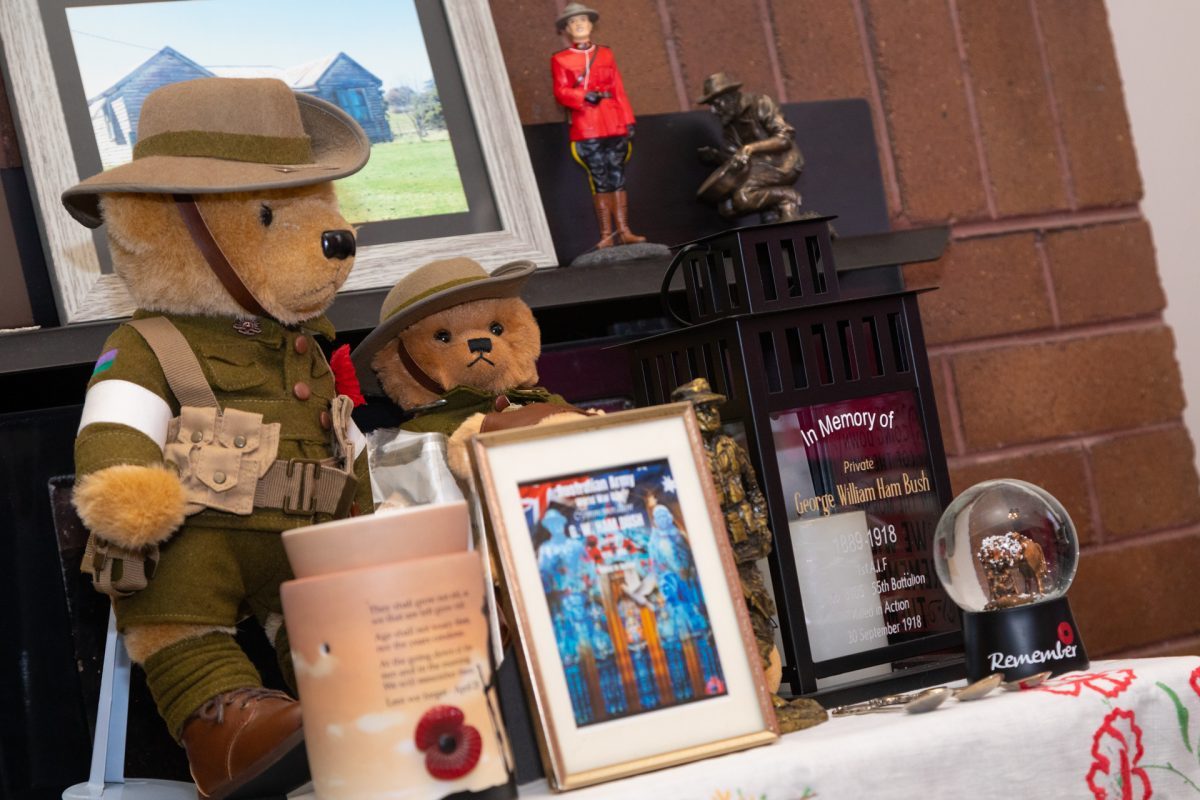 Margaret Bush and her family have set up a small tribute at home for family members who gave their all for their country. Photo: Michelle Kroll.

“But now it looks like there is another side to our family history.”

Although Margaret and her husband Peter now live in Yass, they still run the family sheep farm “Boughyard” at Jerrawa, which has been in the family for three generations. It was whilst at Jerrawa that Margaret got to know photographer Ray McJannett after he took photographs of their old shearing shed and members of the Bush family.

She knew he had worked at the Australian War Memorial for many years – “so I couldn’t wait to show him the album to see if he could shed any light on it”.

“We ended up meeting in the Woolies car park at Yass and I told him about the album – and then raced home to get it to show him,” she said.

“He was very excited, too, and asked to borrow it so he could take it to the War Memorial for them to look at it.”

And that’s precisely what’s happened. Ray has made an appointment with Memorial experts to look at the album and help understand more of its provenance.

Stay tuned: we’ll keep you posted with what they uncover.

I love stories like this. What a great find! Lots of research to be done now.

Great Story! Have fun Margaret researching your side of the family.

For more than 20 years, Ray McJannett flew high as a senior photographer with the Australian War Memorial. Whether it...
Read More

Pat Bush was the sort of country woman everyone knew or had heard of. Her stomping ground was Jerrawa, Dalton,...
Read More