UPDATE: 6:00 pm – After a day of devastation across the Far South Coast, four fires remain at an emergency level on the last day of 2019. In less than 24 hours, the fires have burned close to 100,000 hectares, and counting.

NSW Police have warned that all telecommunications, including mobile phone coverage, will be lost tonight on the NSW South Coast between Nowra and Moruya. Hospitals will be among the facilities affected.

EMERGENCY WARNING – Clyde Mtn (Eurobodalla LGA)
Dangerous fire conditions have been experienced across the south coast today. This footage shows the town of Broulee, south of Batemans Bay, around the middle of the day.#nswfires #nswrfs pic.twitter.com/c8rFIP56ms

A 63-year-old man and his 29-year-old son died overnight (Monday 30 December), on their property at Wandella, about 10km north-west of Cobargo.

A woman has told police she’d left the property the previous evening, but her husband and son stayed behind to defend the home and farm equipment. She returned this morning and discovered their bodies.

A 72-year-old man is unaccounted for at Belowra, about 50km north-west of Cobargo.

This morning, the NSW RFS confirmed that the RFS firefighter killed at the Green Valley Fire, east of Albury, is Samuel McPaul from the Morven Brigade in the Southern Border Team.

From a communications officer manning the phones with the Rural Fire Service in Newcastle: “We are having another heartbreaking day in comms with people losing homes and lives, and with everywhere a tinderbox at present, it won’t take much for a spark to take off.”

From Batemans Bay came reports that Bunnings had “exploded”.

From the director of the Mogo Wildlife Park (Mogo Zoo) Chad Staples: “Every single animal at the zoo has been saved from the fire that swept through the area this morning. The smaller animals we caught and took inside. The larger, dangerous animals – big cats, gorillas – we put them into their night houses so we could protect them there. People are passionate about the animals. The fires are still burning across the road, so we need to keep vigilant.”

From the woman in Narooma who allowed someone’s brother and partner to use her phone, although her phone battery was low, to contact family and let her know they’re safe: “I cannot thank you enough.”

From the NSW Premier Gladys Berejiklian, “It’s going to be a rough night for thousands of people on the south coast.”

South Coast residents are about to lose all telecommunications including mobile tonight, following a day of complete devastation. A father and son have been now confirmed dead at Yowrie, west of Cobargo. Another person is still missing from near Belowra. Many coastal communities are without water and some without safe drinking water as massive blazes pass through, Genevieve Jacobs reports. UPDATE: 3:30 pm – NSW Police has confirmed the deaths of two people west of Cobargo overnight. NSW Premier Gladys Berejiklian made the announcement in a press conference this afternoon.

“It’s been confirmed today that there are two deceased persons in Cobargo. The police have confirmed that. A third person is missing with grave concerns for their safety, west of Narooma,” Ms Berejiklian said.

NSW Rural Fire Service Far South Coast liaison officer Marty Webster told Region Media it will be some time before fire crews can assess the amount of damage to properties.

“Right across the Far South Coast, there has been significant property loss overnight and today. There are lots of displaced people and a lot of people in evacuation centres,” Mr Webster said.

“It’s been a particularly challenging day to get any sort of containment on the fires, and we’ve just been focusing on protecting properties where we can.”

There are reports that three people are unaccounted for on the South Coast and are being treated as potential fatalities as the South Coast fire disaster continues. Genevieve Jacobs reports that Batemans Bay, Mogo and Broulee are being impacted as firefighters battle volatile winds, a strong southerly and extremely aggressive fire behaviour. http://ow.ly/klAC50xKnDC

Mr Webster said there were no reports of any fire activity on the northern side of the Clyde River at Batemans Bay despite the sky being almost blacked. People have been congregating on the beach as the fire front is still being fanned by strong southerly winds.

At Mogo Zoo there is a glimmer of good news, with all the animals saved despite what has been described as a “ring of fire” surrounding the zoo. 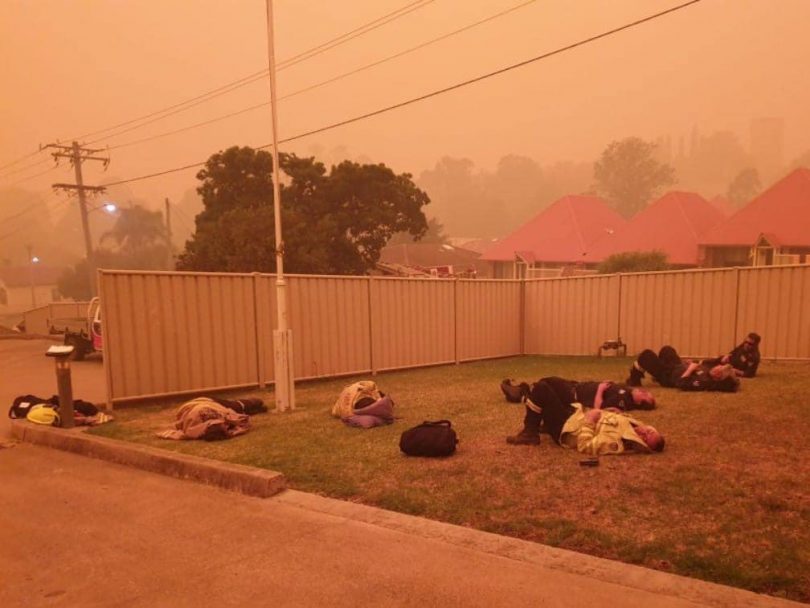 The crews of Strike Team Whiskey catching a couple of moments of reprieve at Bega. Photo: Fire and Rescue Queanbeyan.

Meanwhile, firefighters are feeling the effects of another day and night of constant action across a number of fire grounds. Mr Webster said there are no reports of significant injuries to firefighters.

“We’ve certainly had some fatigued firefighters, but there are no reports of significant injuries to firefighters who have been on the ground today,” he said. UPDATE: 1:30 pm – The focus of the firefighting effort has moved to multiple fronts in the Batemans Bay area as a southerly change has now passed through and has moved up the coast.

This is pushing the fire front in a northerly direction and has effectively turned the sky into an eerie orange and black around Batemans Bay.

The Fires Near Me website is currently not showing the extent of areas burnt south of Batemans Bay.

There are unconfirmed reports of houses being burned in between Surf Beach and Mogo. The status of the Mogo Zoo is also unknown, although there are reports that staff and firefighters are working to save the zoo.

Region Media can confirm there are fires burning to the west of Carroll College at Broulee.

There are also active fires in the Catalina area, with spotting across the Clyde River into Surfside. There are currently no evacuation orders for the Long Beach area. There are reports of no power in Long Beach and Surfside areas.

Neighbourhood Safer Places have been set up at the following locations below, but people are urged to take note of conditions as some of these areas may be impacted by the fires. They are a place of last resort during a bushfire emergency.

UPDATE: 11:56 am – Cobargo’s main street is alight and Moruya is full of evacuees as the South Coast fires reach crisis point. The RFS says the situation “is extremely dire”

Cobargo’s main street is alight and Moruya is full of evacuees as the South Coast fires reach crisis point. The RFS says the situation “is extremely dire” http://ow.ly/3HLV50xKnrh

UPDATE: 11:31 am – Worsening conditions on multiple fire grounds overnight have created chaotic conditions for towns on the NSW south coast this morning (31 December).

Three bushfires are burning at an emergency level. People between Batemans Bay and Bega are being told to evacuate to the nearest safe town.

Fires on the south coast of NSW are currently moving rapidly to the east. A strong and gusty southerly change is expected to move up the coast this morning. This will push fires in a northerly direction. #NSWRFS pic.twitter.com/K2CvsGplKF

There are reports of significant property losses to the west of Cobargo. The Badga Forest Fire has reached the town of Cobargo. Buildings are alight in the town. Power has also been cut in Moruya as people from neighbouring towns seek safety.

Further north, the Clyde Mountain Fire has reached the Eurobodalla Botanic Gardens and is spotting into areas along the coast south of Batemans Bay, including Caseys Beach, Catalina and Batehaven.

NSW Rural Fire Service south coast liaison officer Marty Webster told Region Media the situation all along the south coast is an extremely dire one and that resources will be stretched.

His key message for people was to act according to the advice given by official RFS channels and carefully follow the NSW RFS website for updates.

“Our key message is for people to read the message they receive and act accordingly rather than do mass evacuations,” Mr Webster said.

“People need to carefully follow the advice on our website. Leaving late is always a dangerous option.”

Mr Webster said the safest options for people choosing to leave was to head for the CBD areas of the nearest major town and stay clear of back roads.

“The safest place is going to be in the CBD and not in the fringe areas around those towns,” Mr Webster said.

“I want to reinforce that we do not want people travelling on back roads.”

“We’ve got resources here and from out of the area. We’re getting everything that’s available, we’re doing everything we can, but it’s never going to be enough on a day like this,” he said.

A strong southerly change is expected to pass through the south coast today. A duty forecaster with the Bureau of Meteorology said the southerly change has reached Montague Island (as of 10:30 am, 31 December) and is slowly making its way up the coast.

This will push the fire front in a northerly direction.

EMERGENCY WARNING – Clyde Mountain Fire (Eurobodalla LGA)
Fire has impacted Batemans Bay. The southerly change is expected in the next hour and will drive the fire in a northerly direction.#nswrfs #nswfires pic.twitter.com/9BH5aDTweX

12 Responses to Day of devastation across Far South Coast

Would like to help as a volunteer!
Will do anything!
How can we help ?

Does anyone know the situation on grantham rd in batehaven? We have friends that stayed there.

Does anyone know if all the shops on highway have gone ?

So tragic, hopefully the extra strain on resources by the additional summer holiday tourists isn't too much.

So tragic...we hope everyone is safe.

Matt O'Toole - look at Moruya - it is dreadful. Mogo is also in trouble, which could mean the Zoo and our van in the Caravan Park also may be in trouble.