Making sense of Candelo’s flying foxes – perhaps we can decide to cope with them? 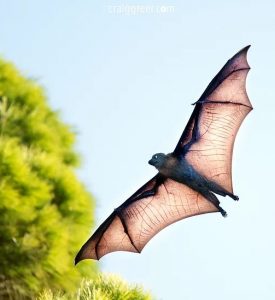 There’s a colony of grey-headed flying foxes in Candelo, in the massive old plane tree by the bridge. On the latest count, there are around 1400 bats roosting in its branches.

There aren’t many native species that arrive on our doorsteps in such sudden, large numbers, and with such noise, visibility, and aroma.

We’ll never see 1400 wombats hanging out on Candelo Oval at the same time!

Flying foxes challenge our sense of control over our urban spaces, failing to seek our permission to take over parklands, failing to give us notice for when they will check in or check out, and failing to place an order for what they might eat from our gardens along the way.

So are they simply unwelcome guests in our town landscapes? Why might we want to attempt to understand their movements, their presence, and our relationship to their habitat?

In the Southeast region of NSW, grey-headed flying foxes are a well-known part of the landscape: at Bega’s Glebe Lagoon a population has existed there for years, flying at night to feed on coastal forest flowers or south-west to the escarpment to flowering eucalypts. They pollinate native forests and are an integral part of forest ecosystems.

However, native flora and fauna have become wrapped around the human footprint, existing in the margins, in strongholds that are weakened daily by pollution, deforestation and development.

Flying foxes are one of the few species that can actually transplant themselves back onto the human landscape – but it’s not always a comfortable fit for them or us.

This summer, they have been starving. Eucalypts that provide their usual spring and summer food sources have, for the first time in years, failed to flower at the right time.

Here in Candelo, I arrived back from a trip to Melbourne in November to find seventeen dead baby flying foxes under the poplar trees by the creek. They were tiny. The next day, checking under the trees, I found one alive.

The baby flying fox’s wings were spread out, her 7cm-long body tucked into itself, eyes closed. She was cold. I did something that you’re not supposed to do: I gathered her up in my jumper and tried to warm her up, taking care not to touch her directly, and I called Wildlife Rescue.

Some people find bats strange and scary, or smelly and annoying, and most will not get the chance to see one up close. This baby was only just breathing, otherwise motionless, and at the mercy of my decisions. I held her and looked up into the tree. Somewhere up there was her mother. She would have nursed this baby to the best of her ability for weeks, as she slowly grew weak from lack of food. Eventually, her hunger would have caused her to stop producing milk, and her baby began to starve, eventually dropping from the top of the tree to the ground.

The other babies had not survived the fall or had died on the ground from the cold. There would have been more caught in the branches that I could not see. We were witnessing a starvation event, the evidence of which was brought directly to our town.

Candelo residents have reported losing fruit crops from their trees. The bats are tending to fly out along the creek line, so people in town aren’t suffering too much bat poo on their roofs or cars. But there is a low grumble of discontent in town: why are they here? Will they keep eating my fruit crops? Should we move them on?

Flying foxes usually eat from just over 100 native plant species. Around half of these are targeted for fruit, but the other half are flowering plants that can be visited over and over again as they continue to produce nectar.

Local fruit trees are usually visited by the weaker bats who aren’t able to fly to flowering plants in nearby native forests. The recent food shortage has made this behaviour more common.

Hugh Pitty runs monthly flying fox surveys at the Bega’s Glebe Lagoon colony for the CSIRO National Flying Fox Monitoring Program. He says historically there has been a camp at the Candelo Showground, which indicates they will continue to visit Candelo but probably won’t stay for good.

“You’ve got water here in the creek, but it doesn’t have all the attributes that the main camp in Bega does”.

There are hundreds of previous camps around NSW that aren’t used anymore. The best long-term camps have permanent water, good shade, and no risk of disturbance from below.

When in 2001 the trees across the road from Hugh’s home in Bega became the site of the largest permanent bat colony in the area, he was fascinated rather than upset. He made them the subject of an animal habitat study for his Biology degree. “I sometimes say that my bedroom window is closer than you can legally put a bird hide vantage point for a flying fox colony,” he says.

Many locals are used to the bats, and the Glebe Lagoon colony is relatively uncontroversial.

In Candelo, the flying foxes make a bit of noise and don’t smell too bad most of the time – in fact, most days I find their smell takes me back to swimming at Mataranka in the Northern Territory as a 16-year-old on a school trip (how romantic!).

But the occasional wafts and the screeching aren’t everyone’s cup of tea, and the picnic area underneath the plane trees is a bit of a mess.

With winter approaching, local flying fox colonies will move on and it’s difficult to predict where the bats will turn up in a few months’ time, or what they’ll do next summer.

The question remains the same, though, how do we balance our needs and theirs?

When spotted gums flowered near Batemans Bay a hundred thousand bats arrived on the town’s council land, creating what was referred to as a community crisis.

In Candelo the colony is just over 1% of the size of the former Batemans Bay bat population, and the inconvenience is easier to put into perspective.

Perhaps we can decide to cope with them – because right now it’s the flying foxes, and not our homes and livelihoods, that are in crisis.

4 Responses to Making sense of Candelo’s flying foxes – perhaps we can decide to cope with them?

If we lose the mega-bats we lose a key pollinator of the forests. Grey-headed flying foxes have declined by over 95% since 1900.
To see them is to see Australia as a megafauna saw it. It’s time travel!

We have our fruit trees netted but watch for trapped animals just in case. Our hazelnuts and olives have produced no harvest this year due in part to starving black cockatoos. We need the crop but we need our wildlife even more. having said that, if 100,000 arrived, just in Bateman’s Bay, you couldn’t exactly say they were ‘endangered’ could you? 🙂

People need to get over their fear of bats and realize how important they are to pollination and eating nuance insects. With bees dying in groves, we need bats.

Thanks for getting involved Carole. Ian