Over 1000 people gathered to celebrate the 70th anniversary of the mighty Snowy Mountains Scheme with former workers encouraging the current workforce to press on and deliver Snowy 2.0.

Stories were shared and friends reunited as seven decades of achievement was remembered on the lawns of Snowy Hydro’s Cooma offices yesterday – October 19.

Cooma’s Charlie Salvestro who worked on the Snowy Scheme shared his experiences and offered some words of wisdom for the current Snowy employees.

“There was great camaraderie amongst the workers, we came from all parts of Europe,” Charlie said.

“We all got on so well. Hard work and loyalty was very important. The Scheme was something to be treasured.“ At the official ceremony, Federal Energy Minister Angus Taylor – the grandson of Sir William Hudson who headed the construction of the Snowy Scheme, thanked all the workers and their families who left their mark on this global engineering feet.

“Well done to all of you who have contributed to this incredible project and this fantastic organisation,” Mr Taylor said.

The Scheme is made up of sixteen dams, nine power stations, one pumping station, 145 km of inter-connected tunnels and pipelines and 80 km of aqueducts – all constructed between 1949 and 1974.

While the diversion of water for irrigation was always the original vision of the Scheme, the engineers were well aware of the potential for the generation of hydro-electricity. Snowy Hydro currently provides around 32% of all renewable energy that is available to the eastern mainland grid.

Planning for the next step in that vision is currently underway with the Environmental Impact Statement (EIS) for Snowy 2.0 currently out for public comment.

If approved, the Snowy 2.0 Main Works would involve the construction of an underground power station with a generating capacity of around 2,000 megawatts and approximately 27 km of power waterways linking the existing Tantangara and Talbingo Reservoirs.

It could increase the generation capacity of the existing Snowy Scheme by almost 50 per cent and provide 350,000 megawatt hours of large-scale storage capacity for the National Energy Market.

The community is invited to have it’s say on the Snowy 2.0 Main Works by Wednesday, November 6 via the NSW Planning Department’s Major Projects website. Yesterday’s celebrations linked the two chapters in the Scheme’s history with information talks on the original Snowy Scheme and the current Snowy 2.0 project; while hundreds attended oral history presentations, reflecting the Snowy Scheme as an enduring symbol of Australia’s identity as a multicultural, independent, and resourceful country.

“Not only is the Scheme an engineering marvel, but the Scheme has become one of the great social endeavours,” Snowy Monaro Regional Council Mayor Peter Beer said.

“It’s lovely to see so many former workers and their families return to Cooma to share stories and celebrate their contributions to mighty Snowy Scheme.

“The Snowy Scheme is one of our nation’s proudest accomplishments. Our region is proud to lay claim to being the birthplace of multiculturalism in Australia.”

Between 1949, when the first blast was fired, and 1974, when the physical works of the Scheme were completed, over 100,000 men and women from more than 30 countries worked on the Scheme. Australians formed the largest nationality group making up one-third of the workforce.

Many migrants escaped the horror of war-torn Europe to begin a new life in a new land. Working together on the Scheme, they became part of the Snowy family – former enemies and allies working side by side. The mix of cultures and different ways of life has left an enduring legacy on the social fabric of not only Cooma and the Snowy Mountains but of the whole nation.

Sydney’s Chris Johnson made the five-hour trip to Cooma to represent his grandfather Roy Johnson who worked as a civil engineer during the 1950s.

“This is a fantastic occasion. I’m proud to be here to honour my grandfather,” Chris said.

As celebrations wrapped up, those in attendance expressed their delight at the prospect of attending the 75th anniversary and once again reconnecting with family and friends.

In the meantime, the 70th celebrations roll on… 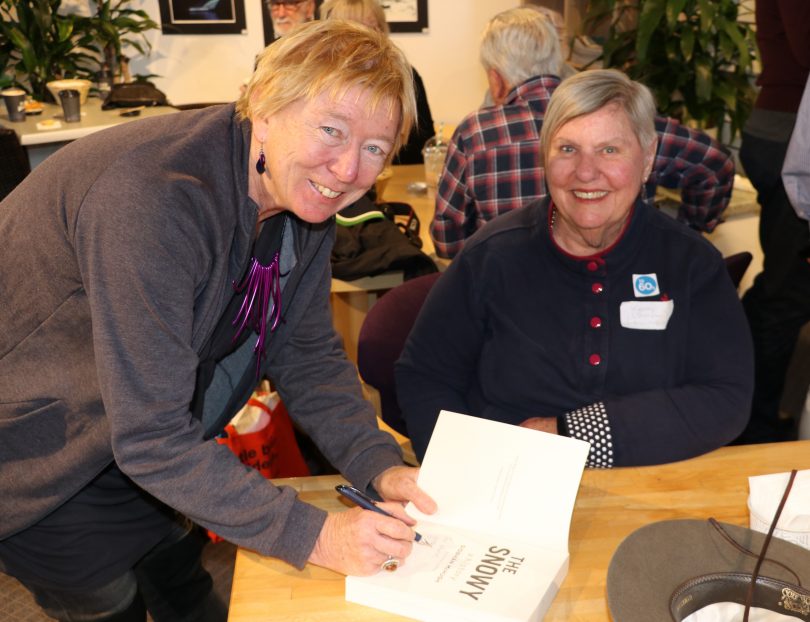 Along the South Coast, residents are breathing again - if they can through the smoke - as cool weather and...
Read More
Top