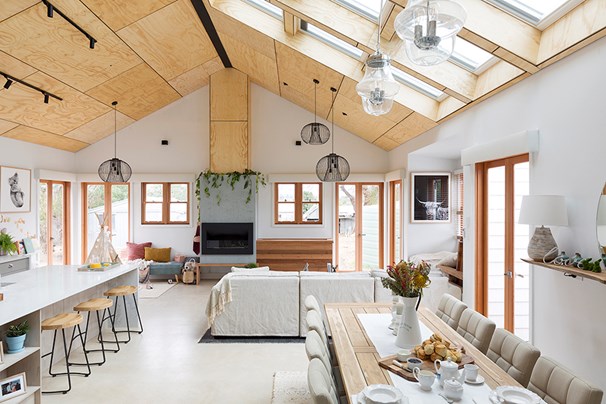 The dining and lounge room of Katie and Alex’s newly renovated home with its soaring ceilings. Photos: Channel Seven.

The Gundaroo home of House Rules contestants Katie and Alex Middlemiss has been transformed in seven days from a crumbling cottage “held up by twigs” to a 21st century country house with towering timber ceilings.

The transformation, unveiled on television to the judges on Sunday night and to the home owners last night (June 10), was the biggest in the competition to date.

It included a new extension at the back of the home featuring soaring ceilings clad in laminated plywood. There was also a new roof for the house complete with numerous solar panels.

Several heritage features of the historic home were retained and incorporated into the new modern home, including a chimney in the kitchen. the original pressed tin ceiling in the master bedroom and a fireplace in one-year-old Hallie’s room.

The dramatic transformation has delighted Katie and Alex who were overwhelmed at the change to the 1880s cottage they bought in 2016 with its tiny proportions, ‘zero’ storage, non-functional kitchen and leaking master bedroom. They said the bank originally told them it was uninhabitable. Katie and Alex outside their home ‘held up by twigs’ before it was transformed.

“That’s the most amazing kitchen I’ve seen in my life,” said Katie.

Alex told the other contestants that they had changed the family’s lives.

“We could never repay you for what you’ve done for us,” Katie said to them.

Below is a video of what Katie and Alex’s cottage looked like inside before the renovation, followed by photos of what it looks like now (sourced from Channel Seven). 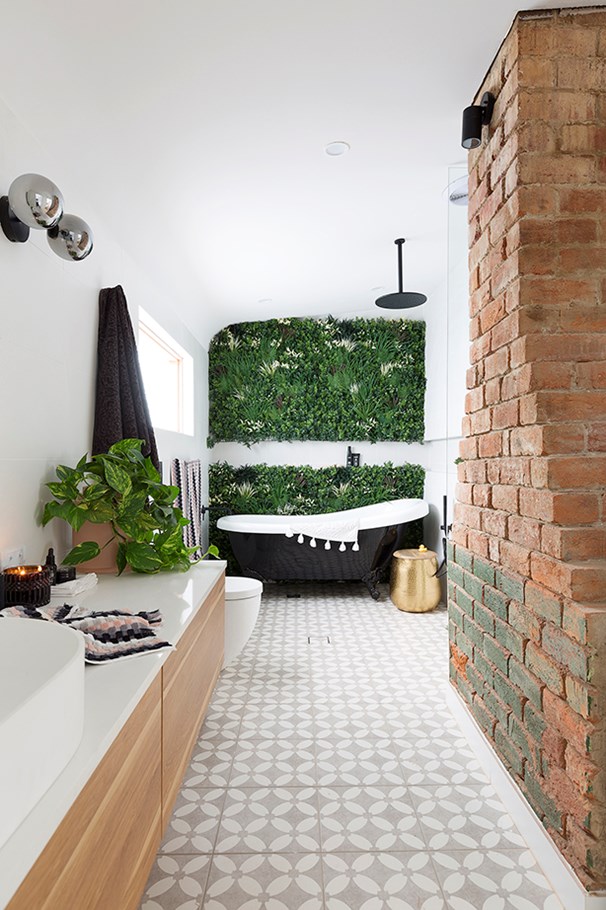 The old and new in the renovated bathroom.

One Response to House Rules: Crumbling Gundaroo cottage doubles in size and value

Love it all except that disgusting bathroom. Laundry a bit boring and not sure kitchen is country but the are fine.

Cute character cottages in Braidwood’s historic town centre are highly sought after and this lovingly restored home is no exception....
Read More

This beautiful stone three-bedroom home is a rare, rare find. Built in 1859 as a stable, in the heart of...
Read More

There is nothing lovelier than a home with history, and the former schoolmaster's cottage built in 1865 at 47 Wilson...
Read More

The magnificent Petrichor Farm at 89 Hastings Way in Gundaroo is attracting a huge amount of interest both locally and...
Read More