Give peace a chance on Anzac Day AKA Lest We Forget Rex Kermode has led Anzac Day in Tathra for longer than he can remember. As Rex asked the big crowd at the town’s cenotaph this morning to look eastward at the rising sun, I took up his invitation to reflect on the day.

Those thoughts had started brewing earlier in the week, and now at the dimming of the day, I am left thinking we need to sharpen and update our focus on Anzac Day.

For a long time, the horrors of the Gallipoli campaign and World War 1 and the depravity of World War 2 have rightly been at the center of commemorations on April 25.

But with the veterans of World War 1 now all gone and with the number of veterans from World War 2 shrinking dramatically every year, Anzac Day in the near future will be and needs to be different.

Victorian Anzac commemorations have gone through a somewhat rocky adjustment over the last two years, with the Anzac Day Commemoration Council instructing descendants to march at the back of the parade rather than mixed in with surviving veterans behind battalion banners.

In 2016, Council Chair and Victorian RSL state president Major-General David McLachlan told The Age, “The changes to the marching order reflect the belief that the march is about those who have served.

“Descendants are able to march collectively, after all the veterans,” he said.

The change has been hard to take for some.

Former federal member for Franklin, Harry Quick, son of Robert Vernon Quick who served with the 7th battalion at Gallipoli and the 58th battalion on the Western Front told The Age, “We should be up there front and centre.”

“These banners have been handed down for the last 80 years and are cherished. There is all this history here and it needs to be recognised,” he said.

In protest, in 2016 and again this year, descendants held their own event before Anzac Day, marching behind battalion banners.

I hope there will always be a place for people to march wearing the medals of their ancestors, but the relevance and meaning of the day will be weakened if that’s all it becomes.

No one is suggesting the veterans and families of WW1 and 2 be forgotten or sidelined, their sacrifice and story carries great weight, but we need to update what we do in the name of our grandfathers and great grandfathers to recognise what’s happening now.

Perhaps the full impact of their stories has been lost in a popularisation and commercialisation of Anzac Day?

Speaking to Waleed Aly and Carrie Bickmore tonight on ‘The Project’, Retired Captain Chris Thompson-Lang said it was important to know and understand history, but more time needed to be spent thinking about today’s veterans.

“Quite often the general public does focus on veterans that are no longer here and they glorify them,” he told Channel Ten.

“The reality is we’ve got veterans that are my age and younger, with multiple tours, some of us are struggling, some of us are losing that connection to our communities, I think that more could be done to strengthen that and provide help.”

“More could be done… to provide help.” Capt. (ret.) Chris Thompson-Lang speaks about what ANZAC Day means to him and other veterans.

I think we do a disservice to the memory of WW1 and WW2 veterans by continuing to send Australians to war and by not picking up Cpt Thompson-Langs insights.

Mick Attwill has been attending Tathra Anzac services for 25 years and in recent years has been called on to offer a reflection to the growing crowd. He doesn’t have a strong connection with the defence forces but is passionate about respecting their legacy.

In his Tathra addresses dating back to at least 2011, he has sought to give his audience a more modern context to consider.

“It is not any easy topic to discuss,” he says.

“The idea of promoting peace on Anzac day is a good idea, the problem is how do we as a community promote the idea, and still agree to having a defence force?”

I wonder does our focus on the distant stories of battles 100 years old cloud our ability to rise to the challenge of Mick’s question?

Local Mums and Dads with daughters and sons currently serving in Australia’s Navy, Air Force, Army, Border Force and Customs add to the need for a tweak to Anzac Day.

As do the local ex-servicemen who don’t attend Anzac services at the moment, uncomfortable with the growing nationalistic fervour and platitudes of the day.

According to the Federal Government’s Institute of Health and Welfare between 2001–2014, there were 292 certified suicide deaths among people who have served in the Australian Defence Force since 2001.

The Australian Vietnam Veterans Health Study, says of the 60,000 troops who went to Vietnam, 74.7% are classified as suffering from some form of health impact as a result – physical disability, health problems related to the chemical exposure and psychological trauma.

These people walk among us now and are clearly hurting, how can Anzac Day better meet their needs?

The veterans of WW1 and WW2 might be surprised to hear they still dominate the traditions of April 25.

These are men and women who it is said went to war to protect future generations, they had a real sense of looking after the now and the later.

The challenge to those who stand in respectful silence listening to the bugle sound is to take the memory of those people and turn it into an action for now. 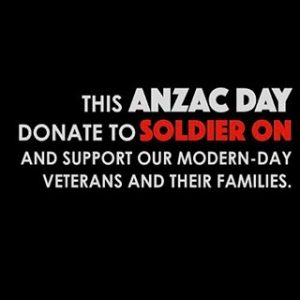 Organisations like ‘Soldier On‘ are doing that and trying to give Anzac Day a 2017 perspective by encouraging people to donate money to support ‘our modern-day veterans and their families’.

During its first year in 2012, Soldier On assisted 200 veterans, in 2015, 500 veterans a month were being supported. The organisation is now positioning itself to help thousands more through an expanding network of Reintegration and Recovery Centres.

The stories and evidence of war compel us to encourage peace on Anzac Day and support veterans from all conflicts. How we do that is a rich and deep conversation to start.

And we have made a start – perhaps unknowingly when we say Lest We Forget. Lest meaning – with the intention of preventing something undesirable; to avoid the risk of.

It’s not just the vets affected by WW1 &WW2. It’s had a generational impact on descendants ver since. fathers and grandfathers too traumatised to be functional parents, often turning to alcohol abuse. Subsequent dysfunctional parenting has led to cycles of dysfunction and mental illness being oases down to next generation. I’d like to know the suicide rate of veteran descendants. I’m now 66 years old and the mental distortions passed through my family, with Grandfather injured on the Western front, Father barely surviving his stint in Bomber squadron flying Lancasters, and a brother conscripted and sent to Vietnam, are all still alive and well. Lest we Forget? My generation can’t!