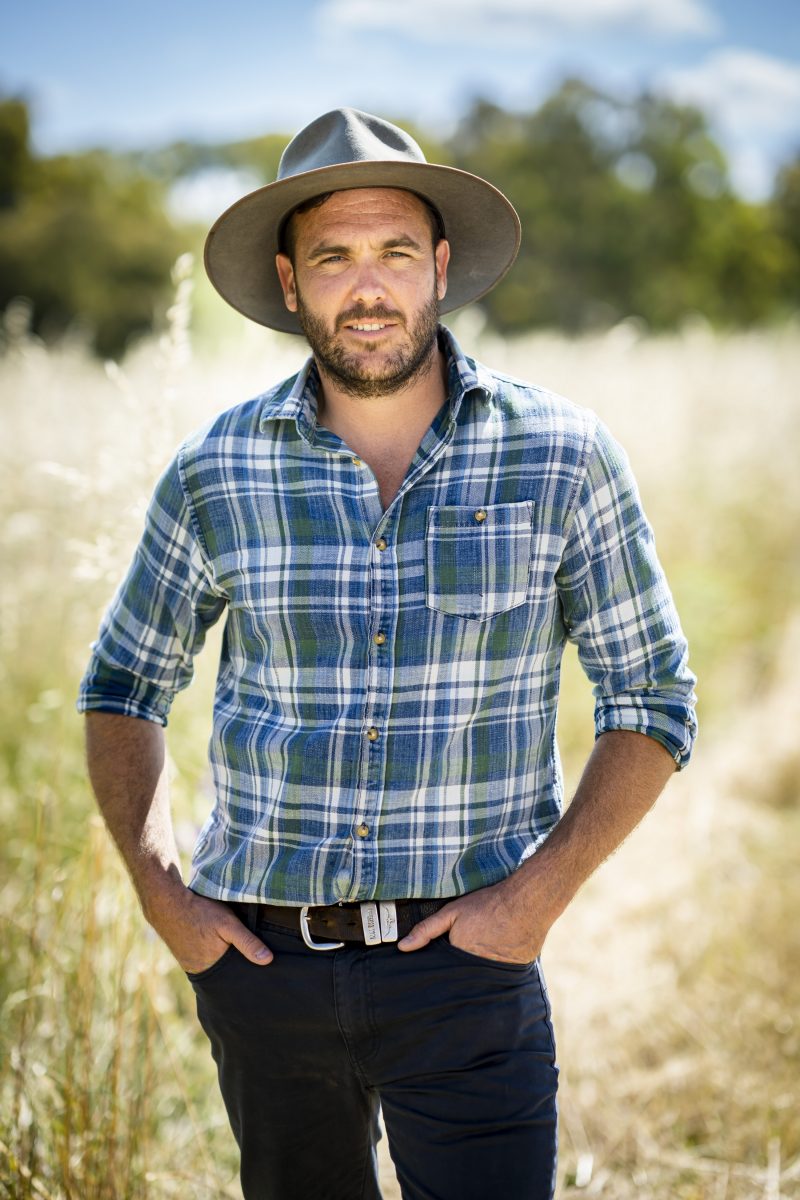 Andrew Guthrie has had the most dramatic start to this season of Farmer Wants a Wife on the Seven Network, but the 30-year-old from Delegate, NSW, says life has been smooth sailing since finding love on the show.

“We’re going awesome,” he says. “It’s a bit hard because we’ve got to stay hidden. It’s not like normal dating where you can go out in public. Sometimes we’ll be hanging out and think of something to do, but then we realise we can’t.”

“It’s been tough, but I guess everyone knows what they were signing up for, and in a few weeks everything will be back to normal.”

While viewers won’t know which lady Andrew has fallen for until the season ends, we can reveal the happy couple have discussed moving in together.

“We’ve talked about it, but decided there isn’t any point until the show is over, otherwise she’ll be locked up in the house,” says Andrew.

He kicked off the season with five women by his side, but sent home 30-year-old Lucy during the episode on Wednesday, 7 July, following some drama at the ute muster in Cowra.

Lucy stirred the pot by telling the other women she and 27-year-old Jess were Andrew’s top picks before he met everyone in person, and that Andrew tried to kiss her, a fact he denies.

“I think I made the right decision sending Lucy home,” he says. “Honestly, I have nothing against her and I think she’s a great person. Unfortunately, she probably doesn’t come across that way on the show.

“The thing is, you only have a certain amount of time to get to know these girls and I guess what happened at the ute muster created such a bad feeling that I didn’t really have a choice.”

It can’t be easy stepping off a remote farm and into an environment where you’re constantly surrounded by cameras.

Andrew looked fairly uncomfortable onscreen during the ute muster drama and he says it wasn’t easy to re-live.

“When you’re on the farm, you only have to deal with two cameramen, three producers and two sound crew,” he says. “But, jeez, there are a lot of people behind the scenes at an event. It’s so much to deal with and it’s very mentally draining.”

Andrew says there’s another scene at the end of the show that he’s also not looking forward to watching.

“It’s not as dramatic as the ute muster, but there is another bit of drama I’m not looking forward to re-living,” he says. Andrew and frontrunner Jess share a kiss on their first date on Farmer Wants a Wife. Photo: Seven Network.

Although they were a couple of years apart at St Gregory’s College in Sydney, Andrew reached out to Harry Robertson from the 2020 season of Farmer Wants a Wife for some advice before filming started.

“He was really good and said, ‘Mate, if you ever want to have a chat, just give me a call,’” says Andrew. “He gave me a bit of a heads up about what it was going to be like, but like I said, I don’t think anyone can prepare you for what you’re about to go through.”

Jess remains the onscreen favourite for now, after winning the first 24 hours with Andrew. However, it was a quick reminder of what farm life can really be like.

While enjoying a romantic dinner in the shearing shed, a truck full of sheep arrived and needed offloading.

READ ALSO: What happened to Paul West and the River Cottage?

Luckily, the pair was able to get back to dinner after two hours of hard yakka and sealed the night with a kiss under some mistletoe.

Viewers have also been enjoying watching our very own ‘man from Snowy River’, Rob Campbell, on Farmer Wants a Wife.

3 Responses to Farmer Wants a Wife: Andrew Guthrie discusses moving in with contestant

I think Jess and Andrew will make a lovely couple They look great together.

Jess just wants to win, so demanding and jealous, annoys me that she acts so coy when talking to Andrew, go Team Ash.

A great show ! Very real and down to earth , love it .