The successful campaign to remove former Liberal prime minister Tony Abbott from his Warringah seat during the 2019 Federal Election is being replicated in other electorates.

A 30-year-old pilot from Thirlmere in the Hume electorate’s north-eastern corner – who has avoided politics until now – is behind the grassroots independent movement to oust his Liberal member and the Minister for Energy, Angus Taylor.

Alex Murphy followed the Vote Tony Out campaign and wondered why there wasn’t similar action to remove Mr Taylor.

He set about canvassing local voters in 2020 through the Voices of Hume group. He found others were unhappy with the MP’s energy, climate and emissions reduction policies and involvement in the GrassGate, WaterGate and Clover Moore controversies.

Within three months, the campaign has attracted 350 subscribers and gained momentum by selling T-shirts, face masks and tote bags through social media, emails and meetings.

Its first meeting in Wollondilly on 17 April attracted between 50 and 60 people. The next Vote Angus Out meeting is scheduled for 30 May in Goulburn. 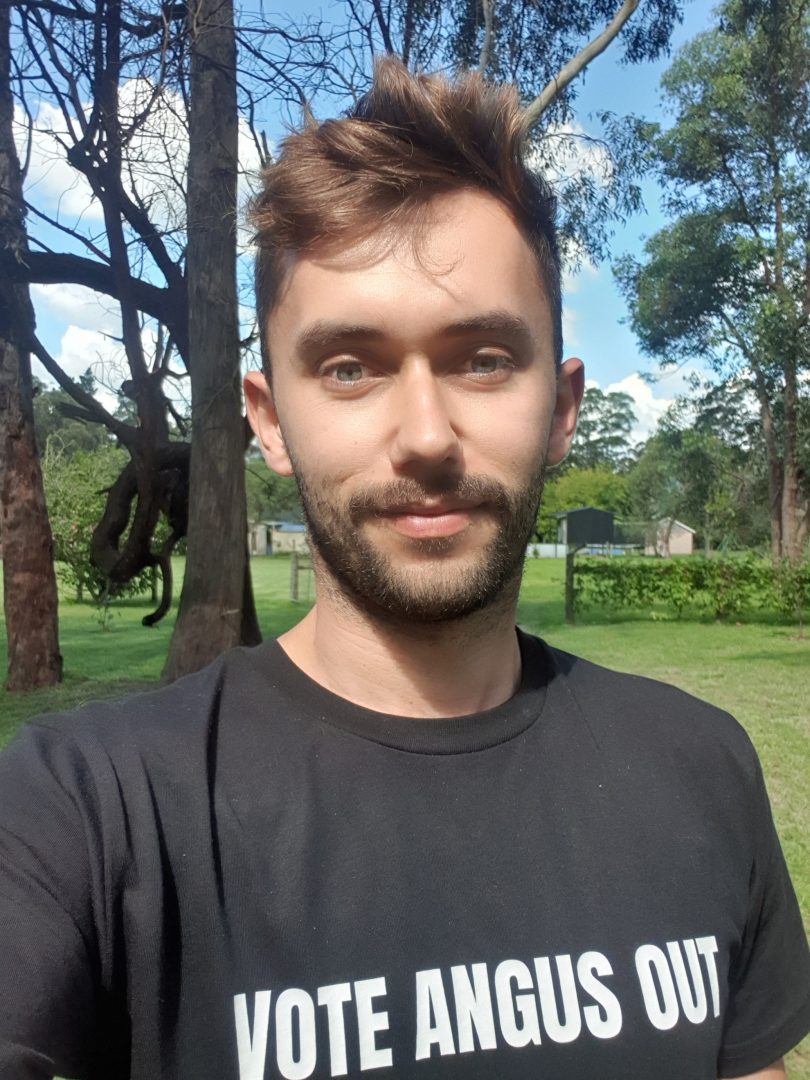 Alex Murphy, a 30-year-old pilot from Thirlmere, is behind the Vote Angus Out campaign. Photo: Alex Murphy.

Vote Angus Out campaigners are mostly farmers and retirees who disapprove of many of the MP’s decisions, including his support for fracking on farmland and lack of support for the dairy industry, increasing the age pension and encouraging Australian-based industry.

“He’s there to represent the gas and oil industries first and foremost,” Mr Murphy said.

Mr Murphy believes there is more support for Mr Taylor’s removal, assuming retirees only represent the campaign’s demographic because they have more time on their hands.

He also bases subscriber numbers on social media follows and email opens. However, if retirees are the true campaign demographic, there would be many who don’t use social media or email.

“People are getting sick of the same old things happening, and a lot of retirees see it as a way to leave something for their children and grandchildren,” Mr Murphy said.

Mr Murphy said he’s confident Mr Taylor will be gone by the next federal election and is seeking advice from Vote Tony Out campaigners.

“It makes our job a lot easier to have a politician who is so easily targeted. His inaction on climate change and emissions reduction, and the fact he’s been implicated in a number of scandals, make him an easy target,” he said.

Mr Taylor was also recently voted the most incompetent cabinet member in the Morrison Government in a poll conducted by The Australian Financial Review.

On the other hand, Mr Murphy recognises that the Hume electorate is a safe Liberal seat. That’s why the Vote Angus Out campaign is also focusing its efforts on finding a strong independent candidate.

“The problem is, a lot of the big parties are just as bad at taking large donations from fossil fuel companies. We really want to put forward someone who isn’t going to be beholden to those big donors,” Mr Murphy said.

Che should be voted out at next election as he has done NOTHING about, farmer, emisión etc etc

I sure hope they succeed in ousting Angus – he’s such a dud.

Go you good things. This is the best thing that could happen for the future of Hume

Warringah was a safe liberal seat as well. Most liberal voters just want sensible centre right policy making for their local area and a steady hand on the tiller. Angus Taylor isn’t providing either of those. My electricity bill will keep going up whilst this guy does everything he can to block the cheap solar and wind others are getting. This fella has been around too long. The people have moved on. So should this bloke.

According to a recent MDB report, “Climate change denial is now only in the realm of the mendacious, the intellectually challenged, and the hopelessly ignorant”. The fact is, the current member for Hume has, through his ignorant policies, unleashed enormous greenhouse gas emissions onto to the planet. These emissions will continue for years. He needs to be voted out. His removal will be welcomed as enthusiastically as when Abbott was voted out in Warringah. Should the Vote Angus Out campaign succeed, they will have done Australia (and the World) a huge service.

Man-made climate change is not happening. Our Earth’s climate is governed by the Sun, which is in a dormant state, and will be for several years.
One short burst from a volcano will undo all efforts to reduce CO2 gases. And just as well as CO2 is our lifeblood in that it helps food to grow. Without it we all die.

“……the mendacious , the intellectually challenged and he hopelessly ignorant………..”

Tired and ignorant responses always include the pathetic volcano example as well as CO2 being a requirement for life.
We are experiencing longer warmer dry periods but the averages bely the fact. Shorter heavier wet periods result in mass flooding but average rainfall appears little different. As with all good things, too much CO2 is deadly to man and planet

there are enough questions about Angus Taylor’s behaviour to make any voter want a change!

Nonsense. Angus has delievered cheaper power prices for all Australians. Expecially in NSW

Proof, please?
I can assure my power bills have not gone down, and I am an Australian and live in NSW, so your claim of “all” is rubbish.
Facts mean nothing to the LNP and its supporters, that is how they win elections.

I wish them all the best. Angus Taylor’s record in Government does not pass any accountability test.
The born to rule and entitled to do as they please mob days, are over.
The Taylor family has far too much influence and power in NSW and the Nation.

The Member for Hume and Federal Minister for Energy Angus Taylor has downplayed a campaign in his electorate that aims...
Read More

Tony Abbott is the wrong choice for the Council of the Australian War Memorial, but not just because his appointment...
Read More