The leadership of Bega High School have asked the school community to share in the responsibility of ensuring the safety and well-being of all.

In a letter addressed to parents and carers and given to students to take home today, Principal Linda Thurston said, “In moving forward from this incident I request the support and consideration of students, staff, and the entire school community to think and talk about the values that are important to us and ways we can all ensure the safety and well-being of others at school.”

The incident Mrs Thurston points to has made national headlines after a female student in year 7 was kicked, thrown around, and beaten by another 13-year-old girl in a stairwell at the school.

The heartless, vicious assault was filmed and uploaded to social media and broadcast on television and shows one student trying to intervene unsuccessfully.

The injured girl was taken to South East Regional Hospital with injuries to her face and later reported the incident to police with the support of her mum.

The alleged perpetrator was later arrested at Bega Police Station and charged with assault occasioning actual bodily harm and stalk/intimidate with intent to cause fear/physical harm. The 13-year-old was granted conditional bail and will appear before the children’s court in mid-July.

In today’s statement, Mrs Thurston said, “Bega High School, other NSW public schools, and the Department do not accept violence, bullying or other forms of inappropriate behaviour.”

“Staff responded immediately and appropriately when they became aware of an incident taking place. Police are involved and the school is cooperating with their investigations.

“Students involved in the altercation are being dealt with through the school’s disciplinary code. The student subjected to inappropriate behaviour is being fully supported by the school.

“The school and the Department deem any person/s to be rebroadcasting footage of the incident are not considering the best interests of any of the students involved,” Mrs Thurston said.

A recess time rally called by students to highlight the broader issue of bullying and their concerns appears to have been called off. A whole school assembly was held and it seems senior students have met with teachers.

“We applaud the initiative our senior students have taken to ensure that the student body is heard,” the Principal said.

“At the assembly, student leaders spoke of how they will continue to work with both executive and teaching staff on this important issue.” 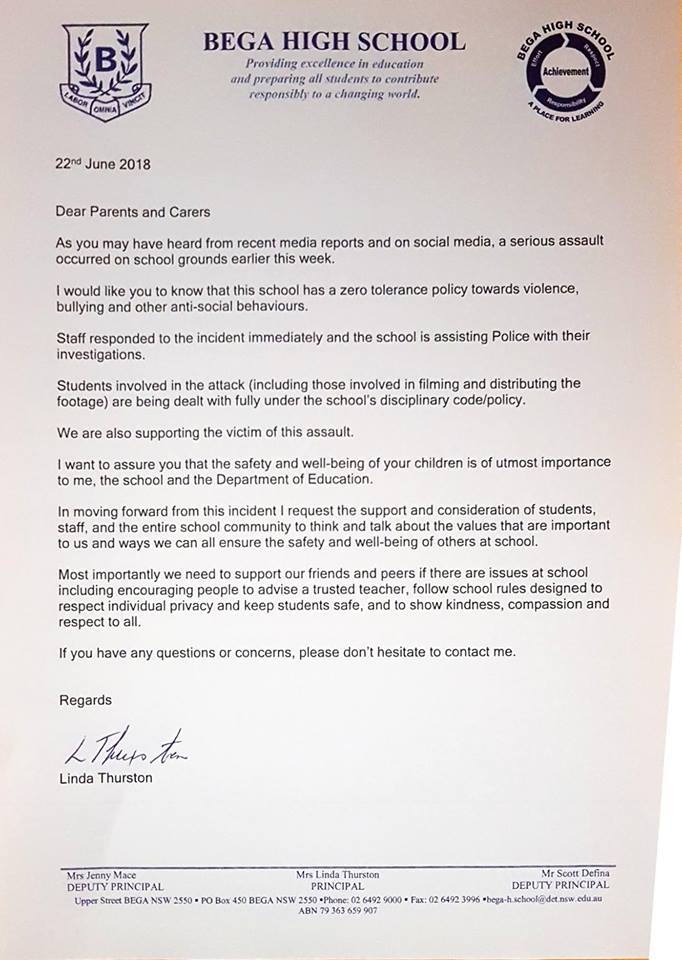 On social media, this afternoon School Captain Ebony Beetson said, “We are working closely with the school to plan and coordinate ways to address the issue of bullying and abuse. This will allow us, the students and faculties to be involved in a unified action against bullying.

“We would appreciate it if the media could stop all contact with anyone involved in the rally.”

When students return to school next week, Mrs Thurston is asking that privacy is respected, kindness and compassion be valued, and that problems and concerns are reported to teachers.

But above all, her message points to the community of influences that can shape a young person’s life and behaviour; school and teachers are just one.

What I hear from the principal is a call to action, an acceptance of the responsibility and ability we all have to change a moment in time and change a life – as overwhelming as that might feel.

This incident was HORRIFIC and I know it will not be the last. I do think that bigger punishments need to be dealt out to the offenders because what is happening now is NOT WORKING. I love that the schools day they have a no bulling policy..but I know those pieces of paper they put up everywhere does NOTHING. THE BUCK STARTS AT HOME..HARSHER PUNISHMENT IS NEEDED..FROM PARENTS UP.

Well this is a really sad situation , i think young people needs lots of help to negotiate their social world. I feel for the perpetrator as much as the victim, she must also be suffering a lot to do this. There is not nearly enough time devoted to social and emotional learning and skills in our high school system, especially in Bega. We live in an era where we consider academics to be the answer to a successful life , sadly this isn’t true as it is equally important to have self confidence , understand ones self , and others , have empathy and know how to work with each other and support each other. These are teachable skills that we dont spend any real time teaching young people. i think until we do we will see these kinds of incidents. So lets be brave and ditch a bit of the time spend cramming info and talk, share and practice kindness.

To the school community,
It was with deep sadness that I read about the violent incident at Bega High in ‘About Regional’ on FB. Years ago I worked in a youth refuge and experienced equally devastating violence and again in Wilcannia where I was teaching. It gave me an insight into the terrible injustice and harm done to indigenous people.

Of course I am supportive of the school’s response in wanting to support the victim and seek further measures to prevent this kind of incident. It’s a horrifying thing to happen in our midst, whether we’re directly connected with the school or not.

Can I also draw attention to the need to address the perpetrator? If our reaction is purely punitive it often back fires in the long term. There are many studies now that show a closer look at violence and it’s origins, with a broader vision will create better communal outcomes. Rehabilitation must be part of the solution, especially for young people with their whole life ahead.

As you quite rightly pointed out in your letter, the school has a zero tolerance policy towards violence, bullying and other anti-social behaviour.
Looking at this incident holistically, I am suggesting that personal or racist remarks can fall squarely into the ‘anti-social behaviour’ category. These are hurtful and damaging to a young person. Having some knowledge of this situation through close connections, verbal provocations to an already marginalised young person, can cause a violent reaction.

Our focus has to be to move both victim AND perpetrator forward. Leaving one behind will only bury rather than resolve the issue. If our education system can take this on board we will have moved a little closer to a peaceful community.

PS I remember Margaret Little (head of Preshil in Melbourne) used to say to all new parents, “It’s the aggressive child who needs nurturing….”

My opinion for what’s its worth Is that the Department of Education starts supporting the victims of bullying by expelling or suspending the child
This behaviour has no place in education and the child needs to upheld for his actions
Patents need to start taking responsibility for their children’s action and if they are disadvantaged by the said behaviour ,, so be it
This behaviour cannot be accepted in any school in Australia and seriously needs to be addressed
Parents You raise them you deal with them