With only three previous owners since 1860, Bega’s ‘Brianderry’ offers beauty and history but also a future 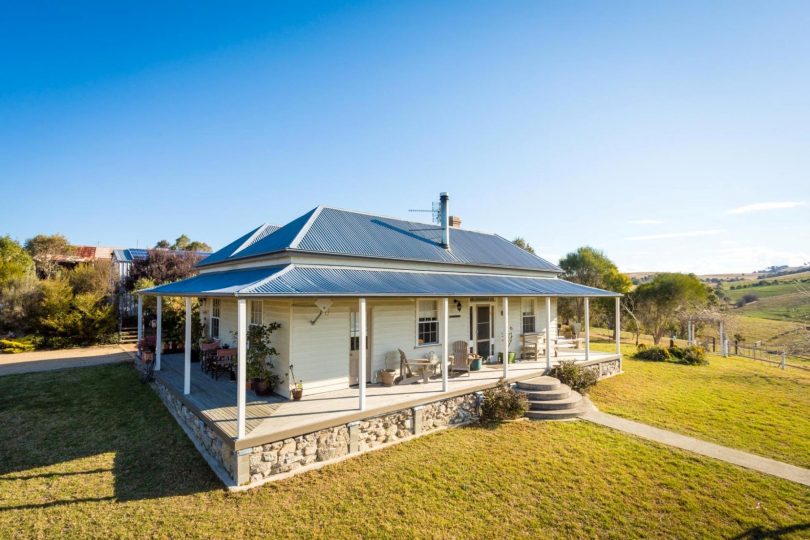 This beautifully restored farmhouse has never been offered for sale before. Photo: Supplied.

Are you looking for an idyllic rural property with income potential from 35 paddocks and no worries about water sourcing?

‘Brianderry’ a beautifully restored 1870’s farmhouse, is set on 330 acres which includes 2.5 km of Bega River frontage and the associated generous water licence which would allow the ex dairy farm to be run as a working farm again.

“The fencing is great, water is secure, shedding, yards and old dairy complete with cool room and freezer are all well maintained,” says agent Rodney McDonald of Elders Bega.

Owner Bill Taylor is on the tractor when I catch him.

“My father and grandfather bought the property in 1942,” he says “it’s not without some anguish that we made the decision to sell but I’m ready to retire and it’s time for someone energetic and keen to take on this amazing piece of land.” Brianderry was part of a 20,000-acre landholding known as Brianderry estate, which was created under the Robertson Land Act of 1860.

“There have only been three owners since 1860,” Bill marvels.

While extensive work has been done to the three-bedroom, two-bathroom farmhouse, it’s been done lovingly and in keeping with the original 1870’s design. 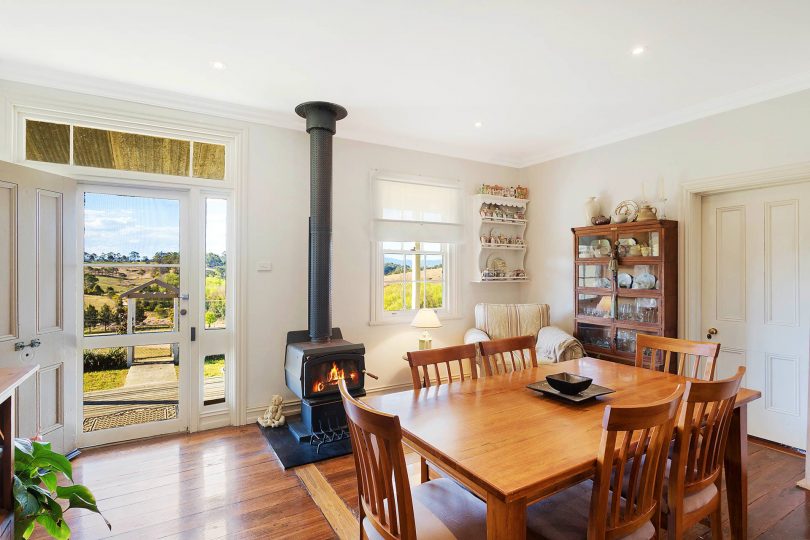 The slow-combustion stove is pictured but the house also has gas heating throughout. Photo: Supplied.

Bill, a former Bega Valley Mayor and councillor, moved back to the property in 2006 and says that at the time, the buildings were in need of some loving care.

“Bill has done a lot of work to the house over the years,” Rod comments “it’s got beautiful big old wide floorboards and high ceilings, it’s been beautifully restored.”

The improvements Bill made, completed in 2013, include turning the 1945 dairy into a studio and workshop and extending the house to make room for a modern master suite and bathroom. Owner Bill Taylor has made use of the original high ceilings to install the loft. Photo: Supplied.

Rod points out that while there is income potential from running stock on the property, it also comes with an approved subdivision of two lots which could be sold immediately or kept as a nest egg for later.

“We’ve had a number of inspections since the property came onto the market late last year,” Rod says “it’s an amazing location and it’s hard to find a property of that size.”

The land is primed for “intensive pasture growth,” Bill says, with an underground irrigation system ready to go.

“There are lots of possibilities though, the land has good granite soil so you could have an orchard.” Bill loves that you can look over the river from the house and says it’s been hard to reach the decision to sell.

“Brianderry is a physically attractive piece of land to live on and to farm on – and I’ve done both!” he laughs “but I’ve had my turn. It’s retirement time for me and an opportunity for someone else.”

Other features of the property include reticulated stock water to troughs in most of the 35 paddocks, 2 x feed silos, 90,000-litre header tank filled from the river, 3.4kw back to grid solar system at house, NBN Broadband, Gas cooktop and electric oven.

Nestled in the green hills of the far South Coast, 'Brightside' at 10 Yourie Street, Quaama, is currently offered for...
Read More