Roll up, roll up for Joseph and his Dreamcoat

There is a certain civic duty sometimes that pushes you to attend a local event. Things only happen when people step up to make them happen, and in a regional community you want to see those people and their events succeed – people turning out is key.

What a buzz, what a bonus when that local event blows your mind!

‘Joseph and the Amazing Technicolor Dreamcoat’ on stage now at Twyford Hall Merimbula will do just that.

As happens in small communities you will recognise many of the faces taking on this Andrew Lloyd Webber and Tim Rice classic – which only serves to heighten the emotion around this production’s success.

I took my seat in row 11 blind to the story.

Joseph is the favourite of Jacob’s 12 sons, jealous brothers conspire but Joseph lands on his feet as the Pharoah’s 2IC because of his ability to see the future through his and other people’s dreams. 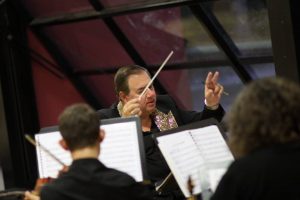 David Willis out front of his red hot 10 piece orchestra

It’s a big cast with close to 50 people either on stage or part of the polished, big sounding orchestra lead by David Willis.

Music is a constant, with no spoken word – all song, including an Elvis-inspired tune from the Pharoah.

Sitting at my desk now some hours after the curtain was pulled across the stage and the tunes are still going around in my head – ‘Go Go Go Joseph.’

The local vision for this show started three years ago on the back of a successful production of ‘The Sound of Music’ where director Shaun Wykes and actor/singer Hayley Fragnito first met.

“And I am a bit of a softy for family, happy feel good stories.”

Joseph was the first of the many Lloyd Webber and Rice musicals to be performed publicly, with the premiere in 1970.

It has since traveled the world as a major musical but it is estimated that over 20,000 schools and amateur theatre groups have staged their own show. Hayley Fragnito as Maria in The Sound of Music.

Dreamcoat Production’s version at Twyford Hall has all the polish and professionalism of this year’s big touring production through the UK, North America, and New Zealand but it has an X-factor born of its regional roots.

“This is a not-for-profit show and the money raised is going to be donated back to our local community,” Hayley says.

Proceeds from the two-week season will go to the Sapphire Coast Advocates for the Social Justice.

“We have been hearing stories from John Liston who plays Jacob in the show and who is heavily involved with the Advocates,” Hayley explains.

“He’s coming along and saying, ‘Today I helped this homeless couple, the lady was eight months pregnant‘ and this is where the money from the show is going.

“The moment the cast realised that, it’s amazing how much more they are willing to give.” she says.

Hayley is a school teacher at Wolumla who took time off term four to help make Joseph happen, she is a constant on stage as the narrator, her presence and voice shines brightly next to the colours of the show’s famous coat. Moruya’s Jesse Zammit is the one wearing the coat, his commitment to the role is perhaps another of this production’s magic ingredients.

Attending rehearsals meant a four hour round trip twice a week for Jesse in the 10 weeks leading up to opening night.

“There is such a community spirit and a love for art and creativity, and to be involved with these people just reinvigorates your desire.

“I think that’s missing a bit in the world, I think commerce is trying to strangle art and so just to see a community say, ‘It’s not about the money, it’s just about doing it because we love it’ is so refreshing,” Jesse says.

Jesse and Hayley are friends from ‘way back’ and Hayley was determined that Jesse would be Joseph. Jesse and his busy artistic life were reluctant at first until Jesse had a dream – spooky considering the role dreams play in the life of his character on stage.

“I’ve always believed in dreams, I am a bit of a nutter in that way, I think dreams do have a message,” Jesse explains. Waiting in anticipation at Twyford Hall

So after initially saying ‘a polite no’ to Hayley and avoiding repeated attempts to bring him on board, Jesse was convinced to take on the role after a dream in which he saw Hayley’s disappear at not being able to find another Joseph.

With time on his visa in the UK winding down, the show’s director Shaun Wykes returned home to do the show, again at Hayley’s instance.

Shaun says he has been enamoured with Joseph since he was three years old when his sisters returned home from a production in Sydney and performed their own version for family.

“It has been an honour to bring this show to the town I grew up in and see it flourish on stage with this incredible cast and crew,” Shaun says.

While reflecting on the power of being involved in community theatre Shaun says a strong connection to people and place develops.

“You appreciate people’s time and how much effort they put in and you see good in the world,” he says. A strong feature of the show is the cast of young performers and singers from local high schools and primary schools. These teenagers and children do us proud, their involvement ensures that relationships like the one between Hayley, Jesse and Shaun continue to be formed.

A special shout out to 12-year-old Luca Yi from Bega who plays Benjamin, the youngest of Joseph’s band of brothers. Luca takes on the song ‘Those Canaan Days’ leading his more grown-up cast, with the audience cheering loudly .

“The people coming up to you after the show and the joy on their faces, when you can give that sort of a gift to people – it’s awesome.” Hayley beams.

*Author and family attended at their own expense.

I went on Saturday night & was blown away by the professionalism of the performance. My cousin was in the first performance, concert style, at St Paul’s Juniors school, formerly Colet Court, in London where he was a pupil. Andrew Lloyd Webber & Tim Rice were commissioned specially to write the piece for the school in 1968. An expanded fully costumed production went to the Edinburgh Fringe in 1972 then the Young Vic and Round House theatres in London. The impresario, Robert Stigwood, produced it at the Albery Theatre in London’s West End in 1973 where I assisted in making the costumes. Joseph was Paul Jones, lead singer with Manfred Mann. However the show I saw last night directed by Shaun Wykes compared favourably with any I’ve see, and with considerably less budget! Congratulations on an excellent production with great singers, good acting with diction I could hear at the back of the hall so none of the humour was lost. I wish I’d bought tickets for each night!

What a great wrap Olwen given your history with Joseph. Thanks for sharing it with us.
Ian

I was at the same performance and it was indeed wonderful. Cast ,crew, and audience all had a ball and knowing that a local advocates group was benefiting from such a fun event makes the whole experience even richer.

Thanks for adding your applause to the mix Peter. Ian

ABBA helped Meryl Streep and Amanda Seyfried dance away their worries on a Greek island. Now ABBA can help you...
Read More