Surrounded by park-like gardens, The Grange of Pambula. Photos: Supplied.

Offered for sale by Chris Wilson Real Estate of Eden, the stately and historic Grange Homestead is set on 13 glorious acres in South Pambula with unimpeded northerly vistas.

Located at 5a Northview Drive, South Pambula, the estate looks across the Pambula River, over its fertile flatlands and beyond to Pambula’s vibrant village on the far south coast of NSW.

A striking two storey Georgian and Edwardian stone residence, The Grange has been a local landmark for almost 170 years and is now one of the oldest buildings in the district. The property offers 360 degrees of English ironwork in the wrap around verandah.

Born in Ireland in 1791, John Lloyd entered the Royal Navy at just 12 years of age and fought in the Battle of Trafalgar at 14. By 1840, he was living in Australia.

Securing the 302 acres for his Grange Farm in January 1844, Lloyd added further land in 1856, his property at one point embracing the land between the pristine Pambula and Yowaka Rivers. Lloyd employed two local men to build his homestead and it is rumoured he also had two convicts assigned to him for help with construction.

Although commanding in appearance from the exterior, the building is a very simple design inside, with the two floors divided into four rooms each, separated by an eight-foot wide hallway running down the centre.

Downstairs, the ceilings are 9′ in height while those upstairs are a soaring 14′. The walls still display some elaborate cornice work. Character of the past: The Grange of Pambula.

Stone for the two storey residence was carried to Australia from Devon, England, as ship’s ballast. Floors are made of golden box gum boards.

The original lower level windows are deep, with divided panes, while those upstairs feature two sets of casement, or French, windows. A staircase with slender carved balustrade and upright mouldings connects the two levels.

Local oral tradition tells of cellars below ground that have been filled in, probably when subsequent owner W.J. Tweedie undertook major renovation works between 1903 and 1906. Thick stone walls and plenty of history in Pambula.

An historical note in 1903 reported: “The house is a large substantial stone building but for some reason the interior has never been finished. Mr Tweedie is about to make excavations and intends thoroughly draining and renovating the house.”

Of the interior renovations another note says, “the taste displayed in each room being conspicuous and we almost envy the worthy host his comfortable and well-appointed premises”. The building has certainly been simplified since then.

However, a wonderful balcony was added to the building at this time. It encircles the whole of the building completely and is embellished with cast-iron railways and frieze and brackets of pretty patterns. 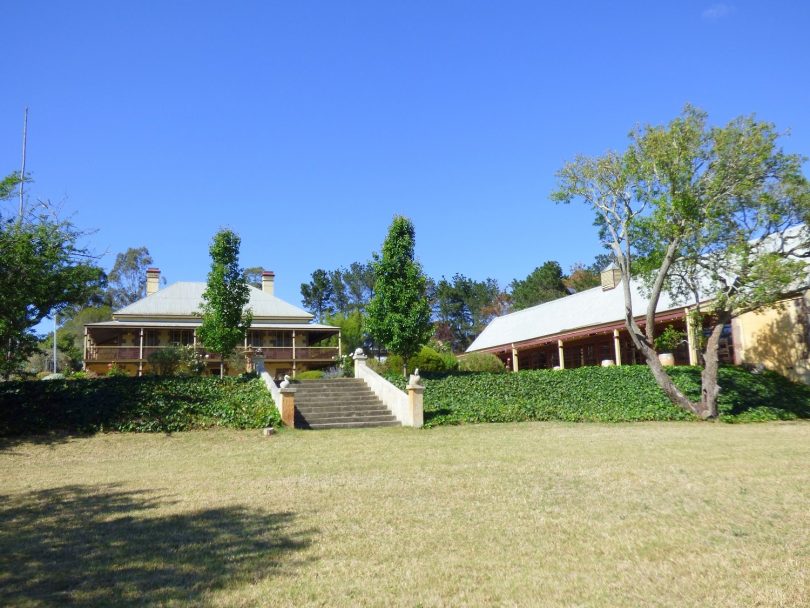 The Grange is surrounded by park-like gardens.

It was also during this period that the building’s formerly undressed exterior stonework was rendered.

In 1915, the Cole family’s lengthy ownership of The Grange began and it became the second building in the district to be included on the National Trust’s Register of Historic Buildings, the other being the old Merimbula School.

After the Cole family, The Grange passed through a number of hands, gradually falling into disrepair. In 1984, it was purchased by Liz and Eddie Delves, who embarked on a major restoration project.

Sympathetic additions were made to the historic building, including the lovely heritage style garden. Also at this time the charming, period-style reception centre was erected on the former site of the old stables. The Grange houses a venue or restaurant for 180 people.

The Grange is currently comprised of four bedrooms, a formal lounge and dining room, renovated kitchen, bathroom, laundry/store and, of course, the first floor wrap-around verandah.

Most rooms retain their original fireplaces, and tongue and groove ceilings. The floorboards continue to glow throughout.

‘The Stables’, adjacent to the homestead, is now a substantial, fully equipped, 190 person function and reception centre. This is a heritage style building (400m2 approximately) complete with a contemporary commercial kitchen, two bars, bathroom facilities, a professional sound system and transferrable liquor licence. A fully functioning commercial kitchen is ready for your vision.

This amazing National Trust-listed property is perfect for an elegant wedding and reception venue, and is eminently liveable. It is currently being enjoyed as a private home. A favourite venue for creating memories.

The Grange has a character all its own. It’s a favourite venue in the community, with many locals having made memories and nuptials in its grounds and restaurants. You will be captivated by the history, romance and potential of this magnificent property.

The Grange continues to stand overlooking the Pambula flood plains and dairy flats, just as it has for almost 170 years. For almost 170 years The Grange has watched over Pambula.

Original Article published by Lisa Herbert on The RiotACT.

This beautiful stone three-bedroom home is a rare, rare find. Built in 1859 as a stable, in the heart of...
Read More

Goulburn cottage a labour of love and filled with character

You're looking at a very attractive 3 bedroom, 1 bathroom home being offered for sale by Goulburn agents Antony &...
Read More