Cooma’s Centennial Park is now home to a prized artwork by one of the nation’s most revered artists.

The Rix Wright sculpture, ‘The Shearer’ has returned to being pride of place with an official unveiling witnessed by family, friends and the community.

Moth balled for two years while arrangements were made for its return to public viewing, Rix’s first wife Sandra von Sneidern and children Bronwyn and Bruno were on hand to do the honours.

‘The Shearer’ holds a special place in the Snowy Monaro’s arts and historical story with the piece representing the region’s strong agricultural and wool industries. Rix is the son of globally acclaimed artist Hilda Rix Nicholas but is remembered as one of Australia’s most eminent sculptors in his own right.

The sculpture was completed when Rix was just 19 years; and taken to Sydney and exhibited alongside the works of his mother at the David Jones exhibition of 1949 before returning to the family property at Delegate, on the southern Monaro.

Daughter Bronwyn says he was just 17 years old when he started the work.

“It was quite ambitious for an artist that young to take on a life-size bronze shearer – it’s one of his best works,” she says.

“It sat in our garden for quite some time when I was a child. Going through his [Rix] diaries recently the Ashstons came and visited in 1969, they flew to our house from Bibbenluke.

“The Ashtons bought the sculpture from dad for $1,000 – that was a lot of money in the day, dad would have been very pleased.” For the decades that followed ‘The Shearer’ was a focal point in the garden of the Ashton’s property at Markdale, near Crookwell, northwest of Goulburn.

Monaro pastoralists Jim and Libby Litchfield of Hazeldean snapped it up at auction in more recent years, concerned it would be lost to the region. There are four other Rix Wright sculptures locally creating somewhat of an art trail.

This sculpture is the predecessor to another ‘Shearer’ sculpture displayed in Bombala and ‘Wild Horses’ displayed in Delegate, plus there’s ‘The Fallen Workers’ in Eden.

More than 40 families and businesses contributed to the purchase of Cooma’s shearer, once it was in the safekeeping of the Litchfield’s. This week’s unveiling is the culmination of that effort, which got sidetracked by the amalgamation of Cooma-Monaro, Snowy River, and Bombala councils.

A plaque embedded in the rock plinth acknowledges the generosity of all those who contributed.

“There are many people who have contributed to this project, in particular, Craig Mitchell the former Cooma-Monaro Shire Councillor who coordinated the donations, Bronwyn Wright who provided guidance for the sculpture’s placement, and previous owners of the sculpture Jim and Libby Litchfield,” says Snowy Monaro Regional Council Tourism Manager Donna Smith.

‘The Shearer’ sits atop of a basalt rock plinth, made by stonemason Mark Clarke. Its design complements the existing rock walks in the adjacent roundabouts and represents the Monaro region Rix Wright loved. 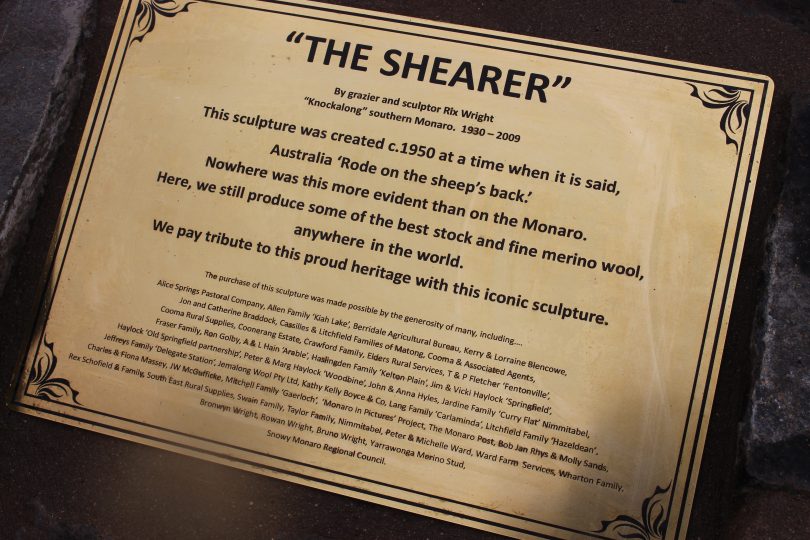 The plaque embedded in the rock plinth acknowledges the generosity of all those who contributed. Photo: Ian Campbell

Bronwyn says her dad, who died in 2009 would approve of The Shearer’s new home.

“My father never wanted to see it polished, which will save Council a bit of money,” she laughs.

“This is just how he wanted it – it’s a beautiful colour. One of the nice things about bronze is that you don’t have to have it all bright and shiny, there are all these colours in the texture.

“It’s really great to see it in a public space.”

‘The Shearer’ can be viewed in Centennial Park Cooma, on the corner of Bombala and Sharp Streets, replacing the diseased century-old Elm tree that had to be removed from the park.

LIVE in Cooma at the unveiling of The Shearer by Rix Wright.

Posted by About Regional on Monday, 16 September 2019

8 Responses to Rix Wright’s Shearer finds a home in Cooma – “It’s really great to see it in a public space.”

It is so good to see Rix’s SHEARER in a place where everyone can enjoy it.

Sensational. Will make sure I get to see it. Fantastic

Rix was a lovely quiet man

Thanks for your ongoing support for our region Ian!

How wonderful for you all Bronwyn Wright. You must be so proud! Will have to check it out when next in Cooma.

Jenny Robb thanks Jenny. It is so good to see it in a public location. Snowy Monaro council members were really good to work with. A long process but well done All!