Four weeks ago the South East community erupted, concerned at what it had been hearing out of the new South East Regional Hospital in Bega.

Around 500 people gathered in the town’s civic centre, with interest from as far away as Moruya, Cooma and Mallacoota – highlighting the truly regional role of this $190 million health facility.

Speakers pointed to increasing waiting lists, a turnover of senior staff, doctors pay being cut, the increasing use of fly-in fly-out locums, admin staff in tears about their workload, good staff fleeing, stretched nursing care, and billions of dollars in Federal Government money stripped away.

The sacking of orthopeadic surgeon Dr Chris Phoon was described as ‘a flint to a tinderbox’ by his colleague Dr Matthew Nott, which galvanised the community rally of March 9 around the need for a full review of the health service.

We package up the most-read About Regional stories of the past week and send direct to your inbox every Thursday afternoon. Subscribing is the easiest way to keep up, in one hit.
Under the agreed Terms of Reference, the reviewers will: 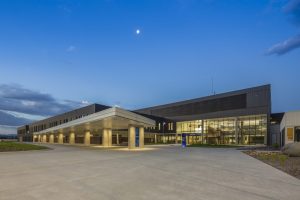 Those charged with doing the review are Associate Professor Michael Reid, an experienced health administrator and former Director General of NSW Health and Queensland Health, supported by Dr Adrian Norwitzke, a neurosurgeon with broad experience across both clinical and business practice.

That work is happening right now and About Regional understands that the Southern NSW Local Health District Board has been interviewed in the last week along with respected local doctors.

The Member for Bega, Andrew Constance says the review is on track to be completed by the end of April and will be delivered to the Secretary of NSW Health for the Minister to review.

Responding to questions from the About Regional community, Mr Constance said he thought it was important that the heat and debate around the issue had settled down while the review team goes about its work.

“I am desperate to see a new era of collaboration in this brand new hospital,” Mr Constance said.

“The key point that I would make is – everyone hold fire, because ultimately there will be a report back to the community on the best way forward.”

Mr Constance was at the old Bega Hospital site on McKee Drive on Friday (April 7) announcing the Government’s intention to turn the prime location into a state-of-the-art TAFE campus.

In doing so he acknowledged the challenges the local health service was always going to face in adjusting to new work practices at the Tathra Road site.

“I always said it was going to be rocky and we are going to have to work hard to get through this transition period,” Mr Constance said.

“New bricks and mortar doesn’t necessarily mean that the morale within the staffing structure is what it should be.”

Mr Constance says he is looking for change and a better government structure to oversee the hospital on the back of the review.

“I’ve noticed over the last week or so that there is a sense that change is afoot, and there will be,” Mr Constance says.

Better engagement with medical staff, improved staff health and happiness, and less reliance on locums are key areas to address for the local member.

“But importantly, I get some really good feedback about the health experiences within the facility, we’ve got professional men and women delivering a great service at the facility and long may that continue,” he said.

When asked specifically about the future of Dr Chris Phoon and any contractual discussions underway, Mr Constance wouldn’t be drawn, but pointed to discussions the surgeon had had with himself and the Health Minister.

Mr Constance said it’s a discussion that should happen ‘off line’.

More will be known in a few weeks, and we wait to see how the review and its recommendations will be presented to the public.

“The Health Minister was right to appoint these two experts (Reid and Norwitzke), it gives the community confidence that we’ve got the best people with the best expertise to be able to get through this challenge,” Mr Constance said.

“Less focus on locums” is CRITICAL to improving patient outcomes. Continuity of care means that specialists really know their patients, as whole people with health issues. They know the history of a person’s illness, treatments, preferences and what works or fails. Fly in/fly out specialists can not do this!!

It is very timely that a review of South East Regional Hospital is underway.

Hopefully the findings of the review will not suggest the usual Neoliberal ideological ‘solutions’ ie more cuts to bring about ‘efficiencies’ and improve ‘morale’.

There is ample evidence of this in other public services in NSW.

Planning is underway for a new one-stop-shop healthcare facility in Batemans Bay with the NSW Government announcing $300,000 towards the...
Read More

A new $20 million, purpose-built health hub in Batemans Bay promises to bring a range of healthcare services together under...
Read More