Following a succession of ducks to launch his first-grade cricket career with Queanbeyan, Peter Solway briefly earned himself the nickname ‘Olympic Rings’.

Peter was only 15 years of age at the time and says four or five ducks wasn’t an ideal way to start, but he says he wasn’t overly concerned, nor was captain-coach Garry Samuels.

In the ensuing years, he would become one of the region’s greatest ever cricketers, amassing nearly 10,000 runs. This includes a top score of 339. He played a record 183 games for the ACT, and 269 first grade games for Queanbeyan, ANU and Eastlake.

During the 1993/1994 season, he played for the PM’s XI against South Africa. Peter remembers the day well: “It was a great experience. The top order in the PM’s side for that game was Hayden, Langer and Ponting.”

There is a widespread belief that he would have gone even further in the game but he rejected an offer to go to Sydney.

“I had an opportunity to play grade but I was comfortable with my job and the family was happy. I simply didn’t want it badly enough,” he explains.

Family has played a significant role in his life: his wife Julie, sons Dean and Mark, and daughter Abby. 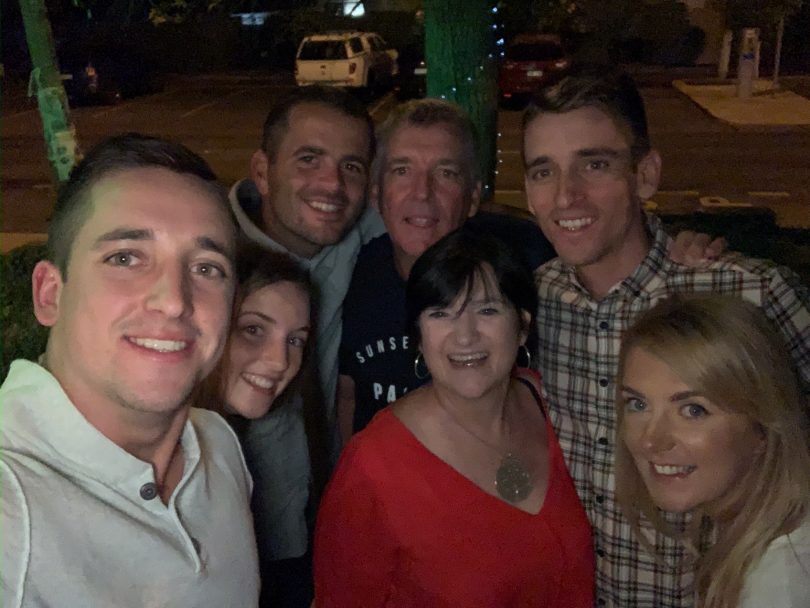 They were the reason he continued playing after effectively retiring from first-grade cricket with an enviable record, which included seven Two Day Premierships.

Peter returned to Queanbeyan fourth grade, just as his sons Dean and Mark were venturing into grade.

Mark is now the current first-grade captain while Dean played in the Futures League for the ACT and was in the emerging South Australian Redbacks squad. Dean also played for the PM’s XI in 2012, close to 18 years after watching his father play in the same fixture. It has to be pointed out, Dean was a toddler when his father played against South Africa in the 93/94 season.

At 56 years of age, Peter’s passion for cricket remains, guiding young players through the ranks to realise their potential.

“I’m still playing third grade and we have a number of good young players coming through.”

He is also the club coach, alongside fellow legend Mark Higgs.

In many ways, Peter is replicating the support provided by his father John, who was a bank manager, and his mother, Fay.

John and Fay met while they were working in the bank. John played rugby league and cricket. He also started the junior competition in Moree while he was posted there to ensure his son received an opportunity to play cricket.

“Dad coached me in the under 11s when we moved to Queanbeyan when I was in Year 5. Four of us in the team went on to play rep cricket: Michael Carruthers, Rod Winchester, Roger Cuschieri and myself.”

Peter went on to play second XI cricket for the ACT before the emergence of the Comets, playing against the likes of Michael Slater and Glen McGrath as they were coming through the system.

In total, he played three seasons for the Comets in the Mercantile Mutual Cup.

In many respects, opportunities to take his game further have emerged later in life in a round about way.

In 2018 Peter was named captain of the Australian team for the World Over 50s World Cup. The side went on to win the tournament, beating Pakistan in the final.

He was also named in the Australian team for the second World Cup earlier this year in South Africa but the tournament was curtailed because of COVID-19.

This career resurgence has been a surprising but welcome development.

“It has given me a new lease of life,” says Peter.

Peter and his family have been the lifeblood of cricket in Queanbeyan with his involvement as a coach of seniors and juniors as well as a player, and the further involvement of his sons and his late father.

Such has been Peter’s contribution, the scoreboard at the Freebody Reserve will be named in his honour while fellow club icon, Ian McNamee, will have his name adorning the pavilion.

They do things well in some places with a strong sporting status such as Queanbeyan. Peter Solway has made a remarkable contribution to that sporting heritage and continues to do so.

Cricket NSW, in conjunction with Eurobodalla Shire Council and its three resident clubs, have released a strategy to grow cricket...
Read More

Despite the region's pitches being frozen, cricket is a talking point again thanks to the One Day World Cup being...
Read More

When the Queanbeyan Blues Rugby League Club players take the field, they always wear their hearts on their sleeves. For...
Read More