Oyster farmers have been hit hard by a series of natural disasters. Photo: Supplied.

Hot cross buns, chocolate and fresh seafood are traditional Easter staples around the region but this year’s flooding rain has taken oysters off the menu for many.

After surviving drought, bushfires and COVID-19, oyster leases in waterways along the NSW coast have been devastated by flooding with the northern rivers and Far South Coast hardest hit.

It would be a devastating blow at the best of times but coming just before one of the busiest weeks in the year has made it even worse.

Pip Boyton, of Merimbula Gourmet Oysters described it as “a wipeout”.

“But I know we will come through this,” she said.

“We have to be resilient. We have been resilient through bushfires, through COVID, now floods.

“We have carried a lot in a very short period of time. This is just another thing we have to manage.”

Oyster farmers can’t insure their stock or infrastructure and many are reeling after this latest devastation.

Pip and her partner Dom have stepped in to help.

With donations from their own farm and Australia’s Oyster Coast, they came up with the idea of a charity auction of Sydney Rock oysters at the Sydney Fish Market this week to support those most in need. 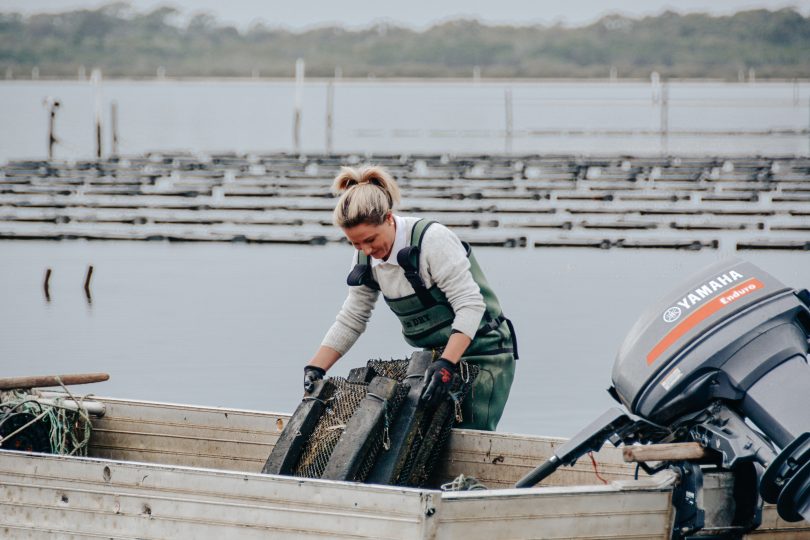 Pip Boyton at work on her Merimbula oyster lease before the floods. Photo: Supplied.

The auction aims to raise funds to provide support and flood relief to the northern river oyster communities, helping with the clean-up bills they now face.

“Demand is through the roof and we are down to bare bones,” she said.

“But it’s not about us losing sales, it’s about the industry as a whole suffering.

“Not many people know but it takes three years to produce a quality oyster.

READ ALSO: Stop it at the source: volunteers urged to log marine mess

“We’ve been unable to harvest since the Clyde River closed on April 19,” she said.

“It’s been a hurdle but it’s not as bad as what the other poor farmers are going through. We didn’t get the infrastructure damage and the loss of stock.”

The long shelf life of Sydney Rock oysters meant producers were able to harvest and store some oysters for the Easter market.

“Lucky the Sydney Rock oyster is such a viable product,” Jade said.

“We harvested as many as we could, about 5000 dozen, but the orders are coming in fast. One restaurant alone takes between 800 and 1000 dozen.”

To put the size of the harvest into context, The Oyster Shed usually sells about 24,000 dozen in the week before Christmas – and Easter is only marginally quieter.

As to when the rivers reopen, it’s in the lap of the gods.

“We can’t do water tests on public holidays so we could be closed for another week or two, it depends on the salinity level,” Jade said.

“Hopefully there will be no more rain and some good tides will take the fresh water out.”

The thought of fresh Aussie oysters on the table at Christmas is a delicious image, however oyster farmers on the...
Read More

The NSW oyster industry has committed itself to playing its part in restoring natural oyster reefs along the state's coastline....
Read More