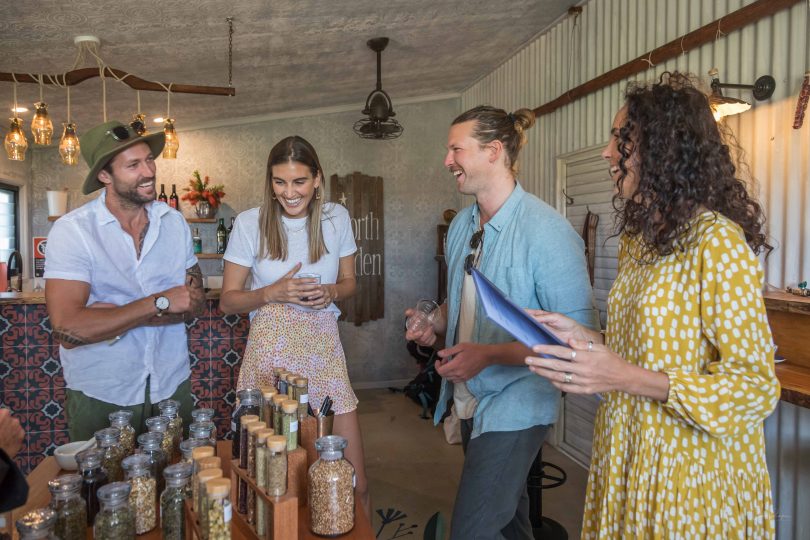 Learn how to make your own gin at the North of Eden Gin School as part of the new food trail. Photo: David Rogers.

Dreaming of Perigord truffles, a rich and creamy camembert or a Mediterranean-style seafood platter accompanied by a jaunty little Verdelho?

The good news is that you don’t need to head to France, Spain or Portugal to satisfy your craving.

All this, and much more, is available on our doorstep, and a new gourmet food trail will make it easier than ever to experience the local bounty.

The Gourmet Coast, an initiative of South Coast truffle farmer Fiona Kotvojs, hydroponic tomato grower Greg Lissaman and winemaker Lucy Wilson, aims to build a strong winter tourism offer to bring the region to life at a time when it’s all but deserted by visitors. Fiona Kotvojs with a basket of truffles from her Dignams Creek truffle farm. Photo: Supplied.

Under the plan, truffle, dairy and oyster farmers, fishermen and winemakers, fruit and vegetable growers across the Bega and Eurobodalla shires will join forces to offer multi-layered gourmet tourism experiences – a one-stop-shop flying the flag for the South Coast’s culinary credentials.

It’s an initiative that’s badly needed according to Fiona Kotvojs, Liberal candidate in this year’s Eden-Monaro by-election, who says the South Coast lacks a tourism identity, and desperately needs a stimulus to keep young people in the area rather than looking for jobs elsewhere.

Around 10 foundation members of The Gourmet Coast will offer experiences ranging from farm and factory tours, gourmet picnics, food and wine tastings, long lunches, producer dinners, truffle hunts and cooking classes. There are plans to expand to 50 members after the initiative officially launches in April, in time for the winter season.

Erica and Nick Dibden from Tilba Real Dairy in the pretty town of Tilba Tilba, three hours’ drive from Canberra, say The Gourmet Coast collaboration is being warmly embraced by regional businesses. The Dibdens’ herd of Jersey cows produces award-winning milk, yoghurts and cheeses and Erica says the gourmet trail will give visitors a real connection to where their food comes from and how it’s made.

“We wanted to be part of it because what we offer here really suits what visitors to the coast are looking for – an authentic experience and the chance to find out about food provenance,” says Erica.

“The South Coast is emerging as such a great food hub and [The Gourmet Coast] will give us the opportunity to showcase what we do on our farm and in the factory. It’s also a chance for us to show what an absolutely beautiful, pristine and unique area Tilba is.” Fiona, who owns a 1ha truffle farm in Dignams Creek, sees the winter crop – with its offshoot food-tourism experiences such as truffle hunting with dogs, and gourmet truffle dinners – as the perfect foundation on which to build a strong winter tourism offer.

“If we can get a number of truffle producers together, people will come to know that this is a truffle area, offering great diversity. Truffles from my farm will be different from truffles grown in Eden, or Braidwood, or Bemboka,” she says. Gavin Hughes and Karen Touchie, who own Stony Creek Farm Distillery where they make their popular North of Eden Gin, will be offering a Gin School as part of the food trail and also plan to keep the cellar door open over winter for “meet the maker” experiences, gin and cocktail tastings.

Another early signup is Broadwater Oysters, located in a picturesque bay on Pambula Lake, where in-the-know visitors can pick up a dozen Sydney Rock Oysters from Broadwater’s tiny oyster shack minutes after they’ve been pulled from the water. Tuck into a plate of oysters from Broadwater Oyster’s shop at Pambula Lake. Photo: Michelle Rowe. Members of The Gourmet Coast will work together to develop food and wine tourism packages offering a diverse range of gourmet experiences combined with accommodation, transport and other regional highlights.

Steve Hambridge, director of the Agribusiness Regional Development Association which has won Federal Government funding to help regional producers build a sustainable future in the wake of bushfires, drought, flooding and the COVID-19 pandemic, says collaboration is critical to delivering a successful regional tourism model.

“ARDA is helping a large a number of producers across the Capital Region and southern NSW with market diversification, and more and more of them are coming to understand that joining forces to create a strong regional brand is the key to drawing not just tourists, but broader business opportunities, to the area. The Gourmet Coast is a terrific initiative,” he says.

Gourmet Coast co-founder Lucy Wilson of Breakfast Creek Winery says, “We’ve been thinking over the past year or so how we can get more people down here. So many people know Byron Bay, Wollongong, or Sydney, but they don’t know the Far South Coast. Everyone loves food and wine, and we are certainly not lacking in produce, or hospitality, so we decided to focus on that”.

“The options here are endless and The Gourmet Coast is a great opportunity for people to come together and celebrate our region.”

Regional producers on the NSW South Coast interested in joining The Gourmet Coast initiative can contact Fiona Kotvojs on [email protected] or on 0448 453 422.

Truffles take over from politics (for now) for Liberal Fiona Kotvojs

Her party won government but not the seat of Eden-Monaro, leaving Fiona Kotvojs considering her future. She isn't ruling out...
Read More

Fans of excellent street food and a warm community spirit should head to Spencer Park in Merimbula this Friday (June...
Read More