The existing Batemans Bay Bridge was opened in 1956.

Batemans Bay is a step closer to getting its new bridge with construction slated to start by this time next year.

Eighty-one (81) community submissions have just been reviewed and assessed with NSW Roads and Maritime Services (RMS) adjusting some of the initial plans following the feedback.

Member for Bega Andrew Constance says the release of the submissions report marks an important milestone for the $300 million bridge replacement project.

“As a result of feedback, the Kings and Princes highways intersection will be modified to improve traffic flow and feature additional slip lanes and traffic lights when long queues are detected,” Mr Constance says.

“There will be a floating pontoon on the southern foreshore to provide better boat access.

“Pedestrian access across the river will also be improved with stairs on either side of the new bridge and Old Punt Road will be widened.”

Other changes include improvements to the North Street and Princes Highway intersection to allow trucks travelling south on the highway to turn into North Street without crossing onto the other side of the road.

“The new bridge will improve freight access by allowing larger trucks and B-doubles up to 26 metres in length to cross the Clyde River and reduce traffic delays at key Batemans Bay pinch points during holiday times,” Mr Constance says.

Maritime traffic will also be able to flow freely with the increasingly troublesome lift span on the existing bridge removed with the rest of the structure.

Some of the community submissions questioned the removal of the iconic structure which has served as a backdrop to the town since 1956.

Suggestions that the bridge should be retained for its heritage and aesthetic value have been rejected by RMS.

Other submissions raised the idea of components of the current bridge being used as a fishing platform, for fish habitat or as a diving wreck.

“The existing bridge [will] be removed to provide improved access to the Clyde River and Batemans Bay for vessels,” the 422 page RMS submissions report says.

“Removal of the existing bridge would also offer improved public access to the foreshore on the north and south riverbanks providing opportunities for new community spaces.

“Leaving the bridge in place as a pedestrian bridge or other tourist feature would require the lift span of the bridge to remain closed resulting in boats with a height over 3.5 metres not able to travel under the bridge.

“The existing bridge is in poor condition and would require ongoing costly maintenance,” RMS says.

The other key question raised by the community was the height of the new bridge.

Some suggesting the proposed height was too low, and that a navigational clearance of between 14 and 20 metres would be preferred to accommodate larger vessels and allow boat access upstream.

“The proposed 12 metre clearance would provide uninterrupted access for around 90 percent of existing boat movements in the area,” the RMS submissions report says.

“A range of navigational clearances from seven metres to 23 metres were considered in [the] development of the proposal.

“Clearance of seven metres would not provide access for the majority of vessels known to use the area.

“The higher navigational clearances (14 metres, 18 metres and 23 metres) were not pursued as bridge approaches either side of the river would need to be lengthened to achieve the required grade.

“This would result in additional property acquisition and biodiversity impacts, as well as adverse urban design outcomes,” RMS says. 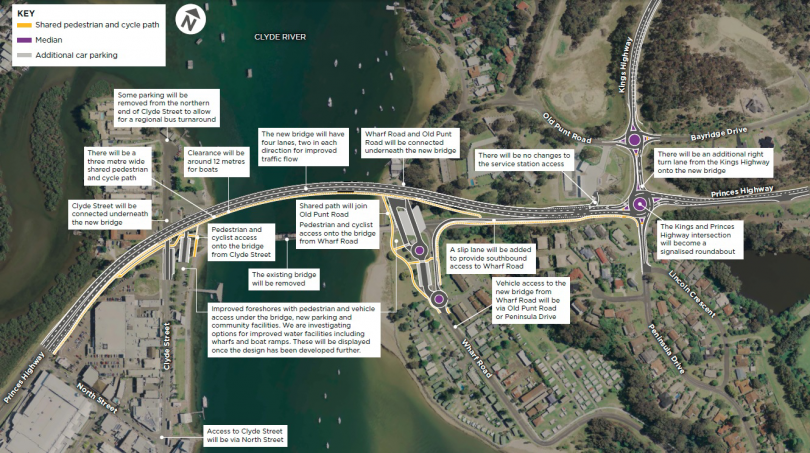 An aerial view of the concept design for the new Batemans Bay Bridge. Photo: RMS.

Given the natural beauty of the area and the bridge’s proximity to Clyde River oyster farms, environmental factors have also been a talking point.

“This assessment identified that up to 0.12 hectares of the Illawarra and south coast lowland forest and woodland critically endangered ecological community [was present].

“An assessment of significance concluded that the proposal would be unlikely to have a significant impact on this critically endangered ecological community,” RMS says.

“The independent expert review supports the assessment of [these] findings.”

And when it comes to water quality, RMS believes the project will have a positive effect on the environment with improved stormwater structures part of the proposal.

“Presently, water draining from the existing bridge and its approaches drains directly into the Clyde River without treatment.

“By including treatment for operational phase stormwater, the proposal can demonstrate a clear positive impact on water quality,” RMS says.

The project is expected to receive planning approval from the NSW Department of Planning and Environment in mid-2018.

The final design and construction tender for the project will be announced later in 2018, construction is due to start in early 2019.

I think it’s myopic not to keep the existing bridge but raise it to same clearance as the new bridge, leave the span closed, & use it solely for pedestrians & cyclists. It would cost more in the short term, but in the long term it would be an investment in local non car movement, health & tourism. Come on! It’s really quite an iconic bridge & people should be able to walk or cycle across the river without having to deal with all that rumbling traffic. It’s bad for the air we breathe & the noise is terrifying.

The New Bridge will have to be a compromise (in height) between the needs of the marine traffic and the needs of pedestrians, and the all-to-often forgotten disabled.
The existing bridge is a very short walk, cycle or wheelchair ride from one side to the other, due to its low clearance.
The New Bridge will not be used as often (if at all…) by those users, due to the longer pathway, and difficult access (“Stairs? What about cyclists and the disabled?). Cyclists: You have 3 options: Ride on the roadway, ride on the pedestrian path and carry your bike up and down stairs, or use your car…
A better solution would have been an opening bridge – but a better design than the lift-span design.
A “Bascule” opening bridge (similar to the “Spit Bridge” in Sydney would be far less troublesome. And if the height was set to allow clearance for “most” marine traffic (the Ferry for one! And most power boats) it would not require opening anywhere as often as the current bridge.
(I still find it incongruous that in this day and age the ferry wasn’t designed to go under the existing bridge, or the bridge should have been designed with a ferry in mind. Surely! Why should it open twice a day – with all the wear and tear, and traffic disruption just because the ferry is a bit too high? Or maybe the ferry should be based on the other side of the bridge?