As is often the case, food became more than just a belly filler at the weekend’s Southeast Harvest Festival in Moruya.

A locally made blue cheese and leek tart at the opening event on Friday night was memorable, but more so were the new understandings and relationships that emerged between two cultures conflicted by a past of racism and brutality.

Held over a day and a bit, the Festival was a collaboration between a white fella and a black fella organisation that extended way beyond the traditional Welcome to Country, and by doing so they perhaps have shown the way for others when it comes to greater engagement and reconciliation.

This partnership between Sustainable Agriculture and Gardening Eurobodalla (SAGE) and the Cobowra Local Aboriginal Land Council has been described as one of ‘walking together’ in the lead up to this celebration of local food and growers.

“A lot of organisations in this area think that our culture has died, but it is still alive,” Lee-anne Parsons, the CEO of the Cobowra Local Aboriginal Land Council said.

“We are trying to be out there and share our culture, and I am just so proud that SAGE has come over and approached Cobowra,” she said.

John Newton, author of ‘The Oldest Foods on Earth’ was perhaps one of the first ‘white fellas’ to feel it. John Newton, author of The Oldest Foods on Earth. By Toby Whitelaw

“I’ve spoken in a few places around Australia in the last six months about this book I’ve written, and I don’t think I’ve ever come across a community of Indigenous and European Australians that are so…working together,” John told the Festival.

“I think the mistake that white fellas have made for over 200 years is telling Indigenous people what to do rather than asking them what they want,” he said.

The main day – Saturday, started with Walbunja man, Bindarray Jiibiny conducting a smoking ceremony in front of the pavilion at the Moruya Showground.

Bindarray invited people to walk through the smoke in order to dispel negative thoughts.

Cultural performances with the town’s children followed, Bindarrey explaining the paint and decoration that covered his body, and the moves of each dance represented the landscape and the animals of his country and the values of peace, unity, and harmony.

Moving undercover, out of the bright sunshine and sitting side by side, was an exhibition of Aboriginal and European farming tools curated by the Cobowra Local Aboriginal Land Council and the Moruya and District Historical Society.

Award winning, Mallacoota based, Indigenous writer Bruce Pascoe, telling the crowd that history is fascinating no matter who’s it is. 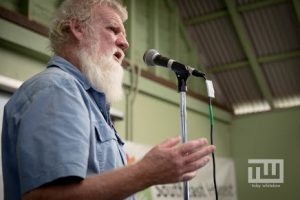 As the author of the acclaimed ‘Dark Emu’, Bruce detailed the evidence of Aboriginal agriculture and society prior to the arrival of Arthur Phillip and his cargo of convicts in 1788.

He urged his captivated audience of ‘foodies and bloody hippies’ to share their experience at the Festival.

His words were then reflected in the act of ‘breaking bread’ with the crowd of around 200 people that packed into the stuffy pavilion.

The single loaf of bread was made of flour milled from hand ground grains of native Kangaroo Grass, following an Aboriginal recipe that dates back 36,000 years. “Which is 17,000 years before anyone else on Earth thought to ground grain into flour,” Bruce said.

According to Bruce, the sense of ease and interest that unfolded around the market stalls of local apples, mullet and pumpkin soup at the Southeast Harvest Festival, wouldn’t have happened ten years ago.

“Thanks to organisations like this…the Australian mind is changing,” Bruce proclaimed.

Jasmine Williams is the Aboriginal Arts Officer with South East Arts and is often called on to liaise between Aboriginal artists and event organisers.

Bruce Pascoe suggests making a pot of tea as one way of starting a relationship, Jazz also believes building a personal connection is key.

“Don’t be afraid of saying the wrong thing, or overstepping your mark – be genuine and honest,” Jazz said.

“Understand that Aboriginal people have been tokenised and taken advantage of in the past.”

Her advice is to involve Aboriginal people and artists early in the organisation of an event.

“The worst thing you can do is leave it until time is running out and the budget is spent.

“This happens a lot in the South East, and Aboriginal performers are often left feeling like a last minute thought, undervalued and exploited,” Jazz said. “Our elders use to say that it (culture) was a secret, and you can’t tell’em (white people) all that because then it will become an industry…and you don’t see too many rich Aboriginal people on the South Coast do you?” Lee-ann chuckled.

In the final session of the Festival, Bruce Pascoe said, “What I have learnt here is that it is possible for Aboriginal and non-Aboriginal people to work together.”

“I constantly go to festivals like this where there are no Aboriginal people, and I ask about it and the organisers say – oh we invited them but they didn’t come,” he said.

“People will not come to an invitation unless they know who you are, and you have to forgive Aboriginal people for not being sure of their welcome.”

In a fateful twist, Lee-ann believes the necessities of our shared future will force better relationships between the different cultures.

“We are all in hard times now,” Lee-ann said.

“All the environmental problems that are happening around the planet, we all need to be a part of caring for our country.”

Thanks for the great roundup on what was a fantastic event, Ian.

Thanks for your interest Geoff, what a great day it was. Cheers Ian