One of the Malua Bay homes razed to the ground on New Year’s Eve 2019. Photo: Kim Treasure.

New Year’s Eve 2019 will be etched in the memories of Malua Bay residents for the rest of their lives.

While Sydneysiders rang in the new year with fireworks, hundreds of people hunkered down on Malua Bay Beach surrounded by a firestorm that burnt through 85 per cent of the bushfire brigade area.

“The 2019-2020 bushfire season was as severe and devastating as it can get,” said Malua Bay Rural Fire Brigade captain Ian Barnes. “Almost all … in the Malua Bay Fire Brigade area would have been affected.

“Whether you suffered loss of house and/or possessions, were traumatised by the event, or you have family members who were badly affected, it is understandable that even months later you will have difficulty reconciling what happened.

“More so, the isolating consequences of the current COVID-19 restrictions have made it even more difficult for many of us to return to normality.”

READ MORE: Tough times bring out the best and worst in all of us

Hazard reduction burning has begun on the NSW South Coast in a bid to prevent a repeat of the bushfire devastation this year. Residents understand the need for the burns but waking to the acrid smell of smoke and a blood red sun has likely triggered anxiety for many.

In a report to the community, Mr Barnes thanked local residents for their support before and after the Black Summer bushfires and urged them to come together to reconnect at a community open day.

“We have heard some of your remarkable stories of both achievement and loss, but we also know that many are yet untold,” he said.

“So that we may hear of them, we are planning an open community day at the Malua Bay Beach Reserve in conjunction with the Surf Life Saving Club, which was also an important part of that day.

“We will have a small visual display of the past fire season and what it may mean to you. It will be a chance to reconnect. It will also be a cathartic opportunity for you to tell your story and hear those [stories] of others.”

The open day is being held at Malua Bay Beach Reserve on 26 September from 10 am to 1 pm and will include a free sausage sizzle.

The location itself will be poignant for the hundreds of people who fled their homes and sought safety on Malua Bay beach only to be confronted by a nightmarish scene of smoke and flames. 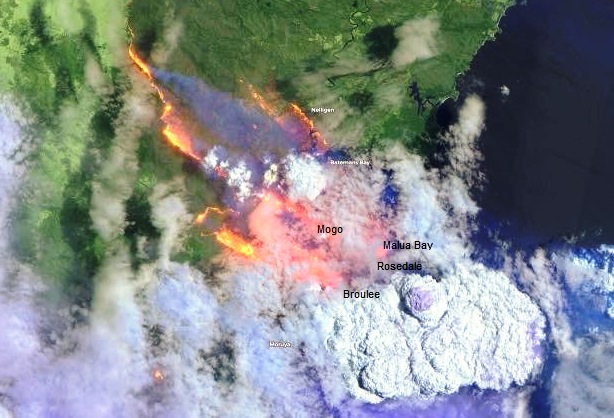 Sentinel 2 satellite image of bushfires in the Batemans Bay region at 11 am on 31 December, 2019. Photo: Landgate Firewatch.

In the early morning of 31 December, 2019, a fast moving and intense bushfire swept from west of Nelligen, through Runnyford and Mogo, engulfing coastal communities from Batemans Bay to Broulee. In some places, it reached the Pacific Ocean.

Mr Barnes said it was remarkable no lives were lost.

“Although shocked, the community did not panic, effectively evacuating where necessary,” he said. “There are many heroic stories and gutsy efforts from property owners [that are] still not generally known.

“The cost to the community is enormous. The recovery will take years and it may never eventuate for some.”

Mr Barnes said his brigade expected a large bushfire on New Year’s Eve but it came six hours early, catching everyone by surprise with its speed and intensity.

“We encountered a rolling firefront of leapfrogging spotfires and mass ember attack,” he said. “The meagre firefighting resources available could do nothing but assist with saving life and property.”

When the fire front hit, the brigade’s biggest truck was west of Runnyford saving property in the Nelligen area and couldn’t get back until late morning. Having already worked an 18-hour shift, the crew began protecting properties on Ridge Road, Wattlebird Way and Bowerbird Place before returning to the station for a crew change. Other crews battled the outbreaks at Sylvan Street and in Mogo. 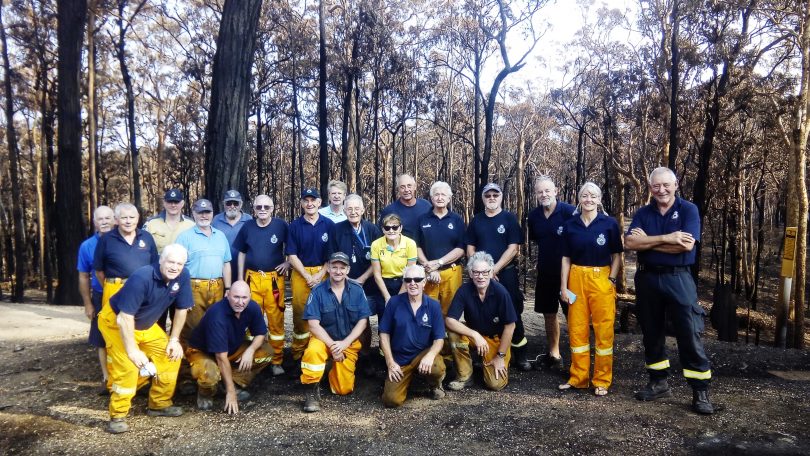 Until outside help arrived mid-morning, six brigade firefighters with two trucks and a crippled main pump battled the blaze.

“It was frustrating for us to be confronted by so large a threat with so few resources,” said Mr Barnes. “Nevertheless, over some exhausting hours, and with significant help from other firefighting units, we were still able to save many houses.”

However, two brigade members lost their own homes, and several lost vehicles. Half the brigade members suffered property loss and the station itself nearly went up in flames.

“It was a horrendous two months,” said Mr Barnes. “For everyone in the community, it is a bushfire season we will never forget.”

Since the New Year’s Eve bushfire fronts passed through Malua Bay and surrounding areas, residents from Batemans Bay through to...
Read More

At 75, Raymond Ng is not letting a natural disaster stop him doing what he loves – cooking up a storm...
Read More

Creative Arts Batemans Bay (CABBI) has launched a community healing project called Postcards from the Fire, in which anyone affected...
Read More