Goulburn’s Marie Kennedy has been awarded the 2021 NSW Southern Inland Senior Volunteer of the Year award for her work at the Riversdale property in Goulburn.

A born and bred Goulburn woman, Ms Kennedy’s referees for the award describe her as a shy and softly spoken person who doesn’t seek the limelight but commands respect through her work and demeanour.

In the more than five years that she’s volunteered at the heritage property, Ms Kennedy has taken on a number of roles along with her central focus of being a tour guide.

Perhaps what she’s most proud of, however, is her ability to keep Riversdale running and generating income throughout a difficult period for the tourism industry.

Riversdale is a heritage-listed house near Goulburn, and it usually opens to the public and is available as a wedding venue.

READ ALSO: When it comes to old remedies, who can you trust?

Standing within its original paddocks and outbuildings, Riversdale is a fine example of a Colonial Georgian home surrounded by gardens and picnic grounds. It’s renowned for its collection of fine Australian Colonial furniture and arts and craft.

Having done minimal volunteering before joining Riversdale, Ms Kennedy was drawn to the role through the stories of those who once inhabited the property.

“The first day I was there I was given some information to read about the property and it just got my imagination going, with some of the things that the people who had lived in the house had done,” she said.

“I started to do more of my own research because some of the residents hadn’t been researched and I found that everybody who had lived in the house had a story to tell.

“Some of the convict stories are very interesting … how a lot of them arrived in the colony with nothing and some of them managed to make a much better life for themselves.” Riversdale, Goulburn, is a property filled with history. Photo: Facebook.

Built in the late 1830s as a coaching inn, Riversdale later became home to eventual NSW Surveyor-General Edward Twynam and his family.

The Twynam family lived at Riversdale for almost 100 years before it was purchased by the National Trust for its Colonial Georgian home status, gardens and collection of colonial furniture and art pieces.

So enamoured by the history is Ms Kennedy, she’s even authored a book on the property and writes a regular article in the local newspaper updating the community on its happenings.

It’s this passion for the place that flows through in everything she does and rubs off on her fellow volunteers. 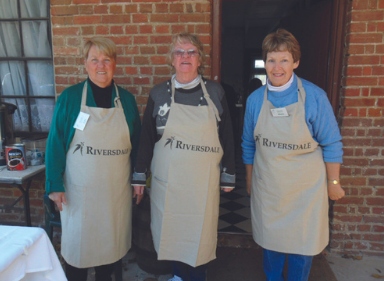 Marie Kennedy pictured (right), is always thinking of new ways to improve what they provide at Riversdale. Photo: Supplied.

Volunteers Coordinator at the National Trust (NSW) Melissa Green says Ms Kennedy has been instrumental in the operations of the property, particularly since the pandemic hit last year.

“She’s worth my weight in gold and that’s only because I weigh more than she does!,” she said.

“There’s no way I could’ve managed that property from Sydney without Marie being there in Goulburn.”

“She’s somebody who just quietly goes about seeing what needs to be done and just getting in and doing it. It was an absolute honour to nominate her.”

Ms Kennedy is always looking for ways to improve the experience for their guests. For example, she recently recruited a volunteer with experience in jam and chutney making, to put on sale for the guests that come through.

Despite her remarkable achievement, Ms Kennedy has not let the success go to her head expressing her gratitude for the support of the National Trust and highlighting the efforts of her fellow nominees.

Riversdale is usually open on Sundays from 10 am to 2 pm. To book a ticket once it reopens, which is expected to be shortly, head to the National Trust website.

Life has become a little easier for St John Ambulance volunteers - and the people whose lives they save. Thanks...
Read More