Kombi Keg: a party idea ready to roll in Kombi Keg is coming to a party near you. Photos: Supplied.

Heads up, Canberra! A fun new way to slake your thirst is blazing a path to the capital. Well, ‘puttering’ may be more accurate.

One Kombi in particular plans to deliver the festivity to any party you have planned this summer.

Phil Hoken launched a fresh approach to the bar-catering scene four years ago, when he painstakingly restored an old Kombi and began transforming it into a mobile bar. Two months later, he debuted the original Kombi Keg in time to celebrate a friend’s birthday. 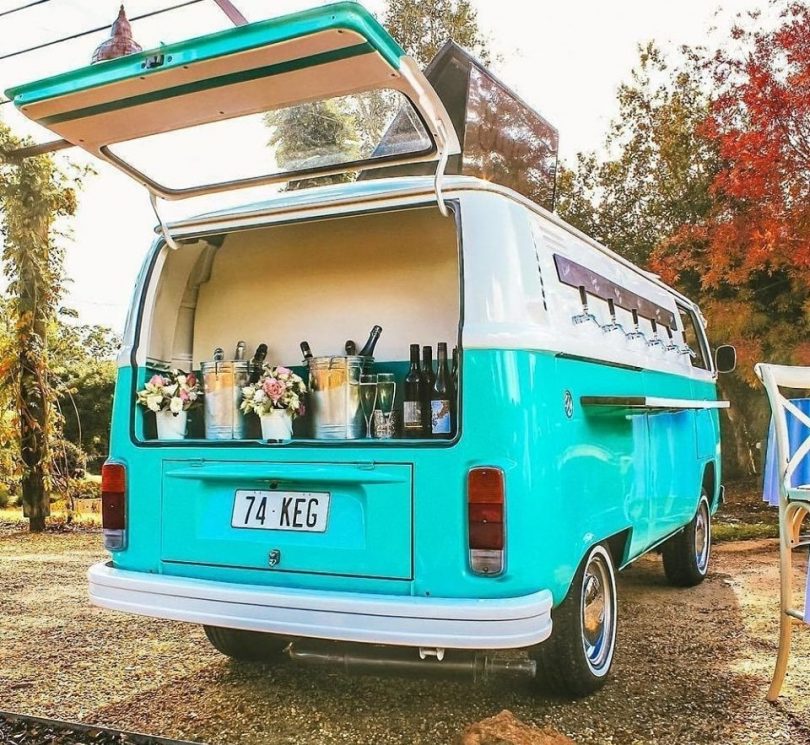 Phil posted an image of his Kombi Keg on Facebook, and the overwhelming response to the concept floored him. Off the back of this exposure, Kombi Keg morphed into a business and Phil, with his co-owner Zac, grew it into a successful 42-strong franchise. There is even a pop-out wide screen TV.

“It’d been popping up our Facebook feed quite a bit. And then one day, we talked about joining Kombi Keg. It literally took us about 30 seconds to decide!” they tell me, laughing.

Marty and Camo are excited to embark on their Kombi Keg adventure. Their 1973 T2 is currently receiving its Kombi Keg makeover.

Marty tells me that they plan to branch out beyond Canberra, servicing parties and events as far south as Jindabyne and throughout the South Coast.

Its mobility factor enables the Kombi to go off the beaten track as well as access backyard events. A wide selection of beers, wine, spirits, cider or non-alcoholic drinks can be poured simultaneously as Kombi Keg boasts six taps. Bottled wine and soft drinks can easily be stored on ice in the chilled tubs. The pop-out wide screen TV is perfect to display a slideshow at a birthday or wedding, or to stream the game at a Grand Final party or corporate event. Six taps means a lot of variety being poured.

While they can run any beer through the Kombi Keg, Marty and Camo are keen to tap into the strong microbrewery and cider scene in Canberra. They hope to link with and promote local brewers like Zierholz, Bentspoke and Capital Brewery. Drinks can be as varied as your imagination.

Kombi Keg are happy to teetotal, in fact they will be pouring kombuchas at the Oh Baby Expo at Thoroughbred Park on the 26 and 27 October.

So if your event is a bespoke wedding, backyard party, VIP Corporate function or one of the many festivals around town and surrounding areas, watch this space.

Kombi Keg will make its Canberra debut in spring.

Head on over to their Facebook page, Kombi Keg Canberra or email your enquiries to [email protected] to learn more.

Original Article published by Michelle Taylor on The RiotACT.