If you bought the flour, making sourdough is the yeast you can do Really? Flour? No one bakes these days. Not when you can pick up a loaf from the supermarket for $4.

But it’s not the real thing, so faced with some time working from home, I faced up to the challenge of sourdough — proper made-from-scratch sourdough, which takes a week just to make the starter culture.

I took on the project not out of boredom, but after I first wrote about a local chef, Frankie Bodel, who turned sourdough bread-making into a therapeutic enterprise after the business she worked for shut down due to the coronavirus pandemic.

Frankie sent me a packet of her dehydrated sourdough culture and some instructions in the mail.

Being a freshly single bloke in need of a project to while away the weekends, I thought, “how hard could it be?” I’ve dabbled at home brewing beer and even made yoghurt from scratch.

But sourdough bread would be the challenge that proved that there’s more to proving a good dough. There are terms like leavening and something called a banneton, and the resting of your levain in the banneton, but apparently a colander lined with a tea towel will do. Making sourdough is indeed a learning experience. Mixing the dehydrated sourdough starter to make it grow.

The interaction took off quite quickly. There was a ‘gestation period’ just to cultivate the starter culture, which is known rather unaffectionately as ‘the starter’. So, I decided to name it and discovered that naming your starter was already a thing and that my initial names – Clint Yeastwood, Marlon Sourbrandough and Carrie Breadshaw – were taken.

I settled on Margaret.

I got on with the job of twice-daily feeding the mix of flour and water, adorned with a very fashionable Chux wipe.

During a period of working from home, Margaret and I were getting along great. She began to grow and form bubbles which indicated yeast activity. This makes your bread to rise or, I should say, leaven (again, the correct terminology is also important). The starter looking nice and bubbly and wrapped in a heat pad to keep it warm.

Then things changed. I was called back to the office and left Margaret on her own. Returning home, there was no growth, no bubbles, no love. There was just a film of liquid on top that indicated she was dying. Some research explained we were on the cusp of a near-death experience, but all was not lost.

I gave Margaret a lifesaving dose of flour and water and put her in a warmer spot, given the weather had also turned sour.

But had I killed her with kindness or just neglect?

It wasn’t all me, though. Margaret had also changed. The nights grew colder and she just wouldn’t take that leap of faith to double in size. I sought counsel from Frankie.

“Sourdough is a demanding mistress,” she said.

So I renamed it Hannibal, after the somewhat psychopathic master, who would possibly be eaten with fava beans and a nice chianti.

What should have been five days to grow the starter turned into two weeks of being unsure if Hannibal had enough gumption to rise to the challenge. Easter came and went. Hannibal was put in a dark corner (the fridge) to chill out. There was no Second Coming. The sourdough ready to bake.

Eventually, the skies cleared and baking day arrived — baking time is just 45 minutes, but you must first have baking day before you have baking time. It was also the coldest day of the year and sourdough needs warmth to survive.

But overnight, Margaret Hannibal the First had risen. It even had ‘bounce’ (more baker’s lingo describing the rebound when you press your thumb into the dough). The dough went into the fridge to compact before I turned up the heat and turned the oven on high. Fingers were crossed. There are other steps involved here but I’ll just say that the proof is definitely in the sourdough.

The smell in the oven was worth it all. It had a crunchy, caramelised outer glaze and Frankie tells me it had a “superb crumb” (again, more lingo to do with how the dough forms while baking). It tasted bloody amazing with some olive oil, a dash of balsamic, some salt and pepper … and a cold beer.

It may be easier to pay for a loaf of real sourdough, and you can see why a good loaf can cost up to $10. But, if you want to join the wave of people buying all the flour, making sourdough bread is the yeast you can do — all with four simple ingredients (flour, water, yeast and salt), some time and a whole lotta love. It’s definitely a hands-on experience at a time when it’s not socially acceptable to touch.

To get your sourdough started, check out Frankie at Necessity Kitchen. 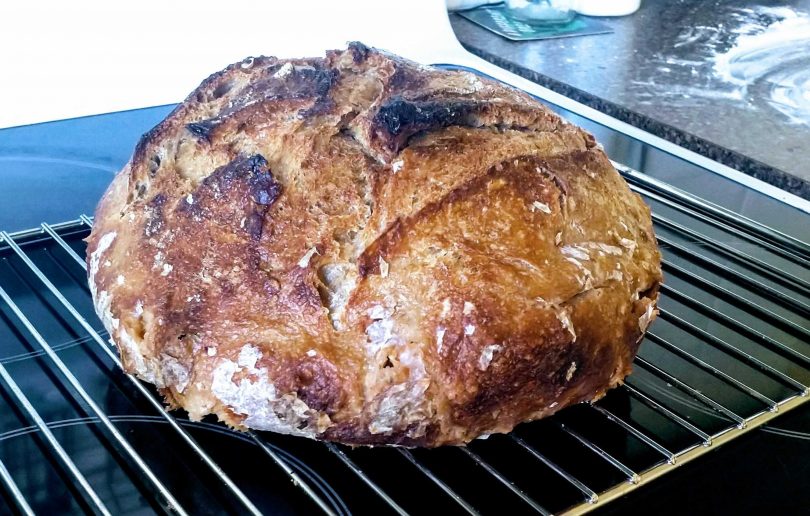 The finished loaf of sourdough bread.

One Response to If you bought the flour, making sourdough is the yeast you can do

I have NEVER kept my starter warm. Room temp is ample for starter, leavain,, and loaf to survive and rise. My starter even gets bubbly in the fridge. It’s my opinion your Margaret had perhaps overheated.

When is a sourdough not a sourdough? That question was answered last week when a group of motivated foodies gathered...
Read More

Clementine Restaurant in Yass, an hour's drive from Canberra, is for sale with owners Brooke Sainsbery and Adam Bantock pursing...
Read More