Peter Crisp became one of the world’s most renowned glassmakers from a farm studio in the Yass Valley. Photo: Hannah Sparks.

His work sits in the homes of Prince Charles, George W. Bush and Tina Turner, has featured in Bombay Sapphire’s global advertising campaign since the early 2000s, appears in the National Gallery of Victoria and Queensland Art Gallery, and has been sold in major department stores including Barneys New York and Harrods.

So how did a country boy from the Yass Valley, in the NSW Southern Tablelands, break into the international art glass movement during a time when few experienced glassmakers existed in Australia?

When Peter Crisp first experimented with the ancient Egyptian technique of slumped glass while studying at Sydney College of the Arts in the early 1980s, he didn’t imagine the unique technique he’d taken to would lead to highly sought-after designs, auctioned for thousands of dollars and photographed in Vogue magazine.

However, he was quietly confident.

Glassmaking was introduced as part of the college’s visual arts degree in 1978, and Peter – who had intended to learn jewellery silversmithing – was instantly attracted to the quick turnaround of glass objects, unlike metal.

After four years at Sydney College of the Arts, Peter, aged 21, decided to return to the family farm in Bowning, aware that his city friends were his worst distraction if he was to make a glassmaking business successful.

Back then, Peter was like a red-hot iron straight out of the kiln – on fire, excited and enthusiastic about showing the world what could be achieved by slumping glass and other techniques to make his well-known functional tableware, studio pieces, limited-edition pieces and museum pieces.

Peter has since created more than 80 designs for clients and department stores. 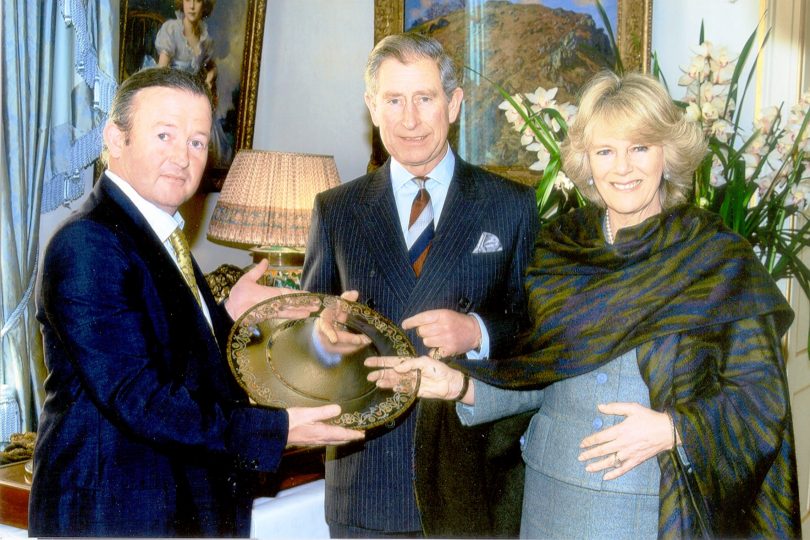 He began by renovating an old cottage on the family farm, and removing walls, installing kilns and a cement slab. It is now part of the Crisp Galleries enterprise, just off the Hume Highway in Bowning and open to the public by appointment.

Peter’s first exhibition was at the Mill Gallery in Braidwood. From there, he had exhibitions in Sydney, Adelaide and Melbourne, and it wasn’t long before gallery owners from the US expressed an interest in Crisp Glass.

America was the promised land of opportunity, not only because it enabled Peter to show his work to a wider audience, but also because he was able to visit 88 galleries in 15 cities to see what was happening in the glass world.

However, the art glass movement was tightly controlled by three galleries: Kurland/Summers Gallery in Los Angeles, Habatat Galleries in Detroit, and Heller Gallery in New York. “Michael Heller of the Heller Gallery said to me, ‘We love your work, but we’ll dictate to you when, where and how often you show in America,'” says Peter. “I wasn’t prepared to go down that track so I went on to show in other galleries.”

It was by attending trade shows in New York, Philadelphia, Sydney and Melbourne each year that Peter broke into major department stores in the US and UK. In the 1990s, the Crisp family business was exporting 10,000 pieces of glass with the help of six full-time employees.

Around 1997, Vogue Australia approached Peter about making the iconic martini glass that is now synonymous with Bombay Sapphire. His original glass – a first of its kind chalice infused with blue sapphires – was one of three selected from around the world to feature in the gin’s worldwide marketing campaign.

Interestingly, Peter believes the photographer hired to shoot the glasses in New York was paid $80,000 per picture. The public can visit Crisp Galleries and gardens in the Yass Valley by appointment. Photo: Supplied.

What many people don’t know about the martini glass is that it was originally intended to be infused with diamonds. However, during an expensive two-year experiment, Peter discovered diamonds turn cloudy when fired in the kiln and decided blue sapphires were probably more appropriate for the gin brand anyway.

Peter’s successful business hasn’t been without its failures, and the other trials and errors have ended up in a big hole in a paddock at Crisp Galleries.

“One day an archaeologist will find that glass and think it’s a gold mine, but won’t know it’s all of my disasters,” jokes Peter.

Currently, he is making tableware from his studio for the European market, specifically for Denmark, UK, Italy and Switzerland.

Members of the public can meet the maker himself and explore his studio and the adjoining, roaming gardens at Crisp Galleries any day of the week by appointment, with 24 hours notice.

While the cafe, gin bar and restaurant at Crisp Galleries remain closed during COVID-19, Peter has partnered with Thyme to Taste cafe in Yass to make picnic boxes to be enjoyed in the garden.