Paul Tweed, with Chicky, his male Eclectus parrot, who was boarding at the Cooma Pet Shop, and shop owner Kylie Clifford outside the pet Shop on Tuesday. Photo: Kelly McMahon.

Luckily for the menagerie of animals and birds inside the shop on Sharp Street, Wendy Shore from the China Town Restaurant across the road saw the fire start and acted quickly.

Relieved Cooma Pet Shop owner Kylie Clifford said she was incredibly grateful for the amazing way members of the community jumped in to save the animals.

Clifford had already left the shop for the day, about 15 minutes before the fire broke out in the shop next door.

“The community support was just phenomenal,” Clifford says. “We were lucky the fire didn’t start in the middle of the night.”

Cooma Pet Shop employee Kelly McMahon says Wendy Shore and Paul from Stewart’s Transport broke down the front door of the shop with a wooden pallet they found nearby.

“They told us it took three goes to get the door open,” McMahon says.

“Then they went through the shop to rescue the animals along with seven other locals who helped as well. The shop was full of thick smoke and they didn’t know their way about, but they found all the animals and put them into any containers they could find,” McMahon says.

“They even got all the canaries that are hard to catch on a good day.

“Other members of the public joined them in rescuing the animals. About 15 to 20 people helped out altogether.” 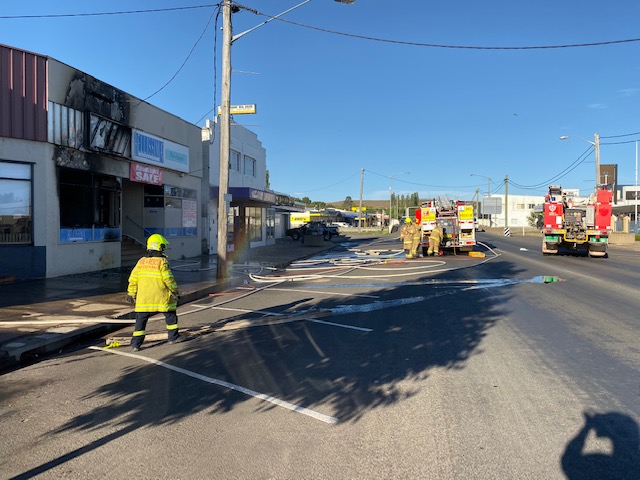 NSW Fire and Rescue and the Rural Fire Service attended the fire, which took about 30 minutes to put out. The blaze started in the front window of Bellissima and has destroyed the shop and caused some damage to the adjoining Cooma Pet Shop. Photo: Claire Griffin-Deller.

Snowy Monaro Regional Council compliance officer Claire Griffin-Deller says she was called by a friend who was concerned for the animals.

“Luckily I was the ranger on call so I went straight down,” Griffin-Deller says.

“When I got there, these amazing community members had broken down the door and saved all the animals including a beautiful spoodle puppy, cats and kittens and even the canaries,” she says.

“The liquor store nearby donated boxes and they got the one puppy, 12 kittens, six rabbits and four guinea pigs into boxes and transported them to the pound where they were kept safe and warm overnight.

“There were no injuries at all, it was a phenomenal effort by the community,” Griffin-Deller says. McMahon says when she arrived at the shop after being called by a friend, all the animals were out on the footpath in boxes.

“They put a couple of cockatiels in with Charlie, a Blue Quaker parrot, and took them out in his big cage. I don’t know how they got the cage through the doorway.”

McMahon says a friend, Sarah McKeahnie heard a dog barking at the back, and knew there was a boarding section at the back of the shop, where there were other birds and animals.

“They got them all out, including Chicky, a big Eclectus parrot, who was boarding at the shop while his owner was away,” McMahon says.

“People were a bit scared to pick him up, because of his very big beak, but Ella Braben, the daughter of the groomer at the pet shop, Sandy, put the parrot under her jacket and got him out of the shop,” McMahon says.

“It took about half an hour to bring the fire under control,” Captain Reeks says. “Bellissima has been extensively damaged, gutted. Four appliances attended the fire, two from Cooma, a Hazmat truck from Jindabyne and a truck from the Rural Fire Service.” Paul Tweed, with Chicky, his male Eclectus parrot, who was boarding at the Cooma Pet Shop. Photo: Kelly McMahon.

Captain Reeks says the fire started in the front window of Bellissima, but the exact cause of the fire is not known at this stage.

“We made sure that the pet shop was safe and that the fire hadn’t spread. Members of the community got the animals out. No animals were hurt or injured,” he says.

However, there is some smoke and ceiling damage to the pet shop.

Clifford says she apologises for not mentioning everyone personally, who saved the animals in the shop.

“Unfortunately we didn’t know everyone’s names or who they were,” she says.

“We’d love for them to pop into the pet shop and make themselves known so we can personally meet them and thank them.

“Also a big thank you to emergency services.”