Geoff Burch has been researching the history of the Riverina’s pubs for over three decades. Photo: Chris Roe.

Wagga Wagga’s pubs are a hot commodity right now, with investors paying as much as $29 million for a piece of the action.

But while the city’s population has doubled in the past 50 years, not a single new hotel has been constructed since 1982.

Geoff Burch from the Wagga Wagga and District Historical Society has been researching the Riverina’s hotels since moving to town in 1983.

Over a beer at Wagga’s newest pub, the Sir Thomas Blamey Tavern at Lake Albert, Geoff explains that the last purpose-built facilities were part of the suburban expansion from the late 60s to the early 80s.

“As the suburbs developed, the suburban hotels were established at Turvy Park, Kooringal, Lake Albert and Ashmont,” he says.

“I don’t know why it stopped in the 80s and why there aren’t hotels at Glenfield, Estella and even Forest Hill,” Geoff says.

Fortunately, the uninspiring exterior is not representative of the bustling interior of the popular venue.

The Lake Albert pub sold for more than $25 million earlier this year. Wagga has a long and rich hotel history. The settlement’s first pub, the Wagga Inn, was opened in November 1847.

“It would have only been a bark and slab building. Very primitive,” Geoff says.

While nothing remains of that original establishment, Geoff says the popular boutique brewery, the Thirsty Crow, is close to the site.

“If you stand smack bang in the middle of that building and head back to the river, that’s where the first hotel was. They say that it’s literally in the riverbed now,” he says.

“The two earliest hotels that are still in the same location are The Riverina (Fitzmaurice St) – it was originally called the Hope and then the Bridge – and the other one was the Farmers Home (Hammond Ave).” 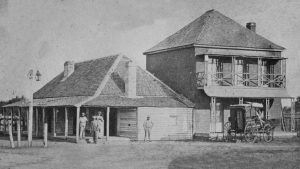 The Farmer’s Home was established in Wagga Wagga in 1856. Photo: Museum of the Riverina.

Following the extension of the railway line in 1879, the number of licenced hotels peaked at 36, adding up to about one pub for every 100 residents at the time.

Community pressure and the rise of the Temperance Movement in the late 19th century and early 20th century saw the introduction of Local Option Voting which gave ratepayers the chance to close neighbourhood licensed premises through a majority vote.

The establishment of the Licensing Reduction Board and new legislation mandating better quality accommodation and other reforms saw hotel numbers decline significantly in the 1910s and 1920s.

Geoff says it’s staggering to see the amount of money that has changed hands in the last couple of years.

The Victoria Hotel in Baylis St, once named The Albury, is the most recent big-money sale, setting a record for the price of a regional Aussie Hotel. In June 1978, the same pub sold for $135,000. Geoff believes gaming licenses are behind the booming prices, but the modern family-focused business model and big money backing have also changed the game.

“If you research the history, the licensee would roll over every year, or every couple of years, because not everybody is suited to be a good publican,” he says.

“I don’t know what they’ve done with the licence from the Home Hotel or the Red Lion. They’re still sitting out there somewhere.”

With a growing population and expanding new suburbs to the city’s north and south, Geoff believes it won’t be long before we see this century’s first purpose-built pub.

One Response to Forty years between drinks: Wagga’s newest pub was built in 1982

It would be great if an article like this could be done about the Uranquinty Hotel. It has been closed for renovations for a while now and it would be great to know the history and the plan for it going forward.

The big money trade in Wagga's pubs and hotels shows no sign of slowing down with the Red Steer Hotel and Motel...
Read More

Wagga publican Sean O’Hara and Maitland based business partner Nick Quinn have added to their portfolio after picking up the Tourist Hotel...
Read More