Police have charged a man after firearms and drugs were seized from a Eurobodalla property on Friday (September 14).

Just before 10am, officers from the South Coast Police District executed a search warrant at a home in Goolara Avenue, Dalmeny.

A 47-year-old man was arrested and taken to Narooma Police Station.

He was charged with possess prohibited drug (x2), possess ammunition without holding a licence or permit, possess unauthorised prohibited weapon, not keeping firearm safe, goods in custody suspected of being stolen, and possess prescribed restricted substance.

The man was granted strict conditional bail and is due to appear at Narooma Local Court on Thursday, October 11. 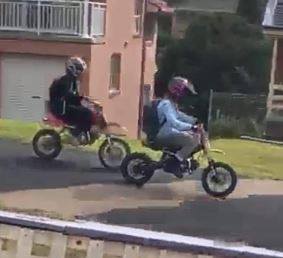 Meantime further north at Batemans Bay, police are appealing to the public for information about the traffic offenders featured here riding motorbikes around the streets of Malua Bay.

Apart from the fact that the bikes are unregistered and uninsured, Police say the riders have been riding in a reckless manner, riding at night without lights and are a hazard to other road users.

One Response to Firearms and drugs seized at Dalmeny, dangerous motorbike riders at Malua Bay

`snot funny I know, but I`ve recently lived in Nanning China, & scooters there, because of pollution,are all electric AND allowed to drive on the footpath..too dangerous on the road.….you can`t hear them coming & they think THEY own the footpath…..I was inclined a number of times to push them over.

Over 450 firearms seized in the middle of Cooma

Police have uncovered a jaw-dropping number of firearms from a property in Cooma. On Thursday, August 22, officers from Monaro...
Read More