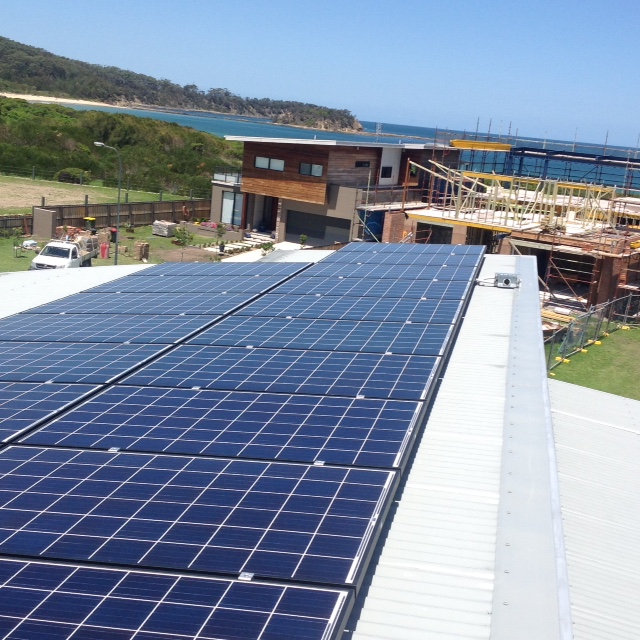 Rooftop solar at Tomakin in the Eurobodalla. Photo: SHASA.

A community organisation with the goal of achieving a low carbon Eurobodalla has welcomed renewable energy commitments from both major parties in the run-up to the March 23 NSW Election.

The South Coast Health and Sustainability Alliance (SHASA) has run solar bulk buys which have helped households with sufficient funds to cover the upfront costs to install rooftop solar. The Alliance has also been able to assist a small number of community organisations to get rooftop solar through grants and sponsorship.

Despite SHASA’s efforts, “we still have less than 20% of Eurobodalla households with rooftop solar and 80% of our electricity still being provided by coal-fired power stations,” says SHASA Chair, Kathryn Maxwell.

“SHASA believes that the commitment by NSW Labor to offer up to $2,200 per household for 500,000 NSW families to install solar will enable far more families to enjoy the significant financial benefits that come with rooftop solar,” she says.

“These 500,000 families will no longer have to dread their power bills and will be assisting to make the grid more robust and reduce our reliance on coal.”

Labor says it will create 9 Gigawatts of new renewable energy generation and storage through a combination of rooftop solar, private sector contracts and a new state-owned renewable energy company.

Labor is also committing to a guarantee on energy prices, “through a series of competitive tenders and long term contracts known as reverse auctions to deliver new renewable energy projects,” Mr Daley says.

“The policy is expected to create more than 13,000 jobs and unlock investment into the renewable energy sector.”

While acknowledging the Coalitions solar initiatives, SHASA believes the Labor plan will be the most effective in reducing electricity prices, minimising price spikes during heat waves, and reducing emissions.

“SHASA is very pleased that the need to increase the uptake of renewables is a key issue in the NSW election,” Ms Maxwell says.

“We need NSW to be a leader, not a laggard, in helping all regions, including the Eurobodalla, to move to a low carbon economy.” The Liberal -National Berejiklian Government has announced they will offer interest-free loans for rooftop solar and household battery storage if elected.

“Embracing new technology is a good way for many people to access cheaper energy, putting more money back into the pockets of hard-working households,” Ms Berejiklian says.

The Liberals claim a family with a $500 quarterly electricity bill could save up to $285 a year while repaying the no interest loans. These savings could increase to more than $2,000 a year when the loan is fully repaid.

To be eligible for the scheme, applicants will need to be owner-occupiers of a house with an annual household income of up to $180,000. Loans of up to $9,000 per battery system and up to $14,000 per solar-battery system will be available.

“SHASA believes there is a role for no interest loans, but only as part of a wider suite of policy measures to encourage solar uptake by broad cross-sections of the community,” Ms Maxwell says.

In times of crisis it can be the basic requirements that are needed, and people in Moruya were able to...
Read More