The winning mural, which will adorn the eastern face of the historic Murrumburrah Flour Mill in the NSW South West Slopes. Photo: HRDC.

The Harden-Murrumburrah people have spoken and the historic flour mill that sits at the centre of the twin towns in the NSW South West Slopes is set for a colourful overhaul.

Just last month About Regional brought you news of a project which would see the mill join six NSW counterparts as part of the Australian Silo Art Trail, with plans to have a mural painted on the eastern side of the landmark building.

Locals were asked by the Harden Regional Development Corporation (HRDC) to vote on two designs for the mill – one in sepia, the other in full colour.

After a two-week voting period, the winner of the Murrumburrah Mill Painting Project was announced as Painting A (pictured).

The mural, a depiction of the deep history and significance of the mills to the Harden-Murrumburrah community, will be painted by renowned silo artist Heesco.

HRDC CEO Chris Ireland said the more colourful option of the two had taken the vote count by 74 per cent. 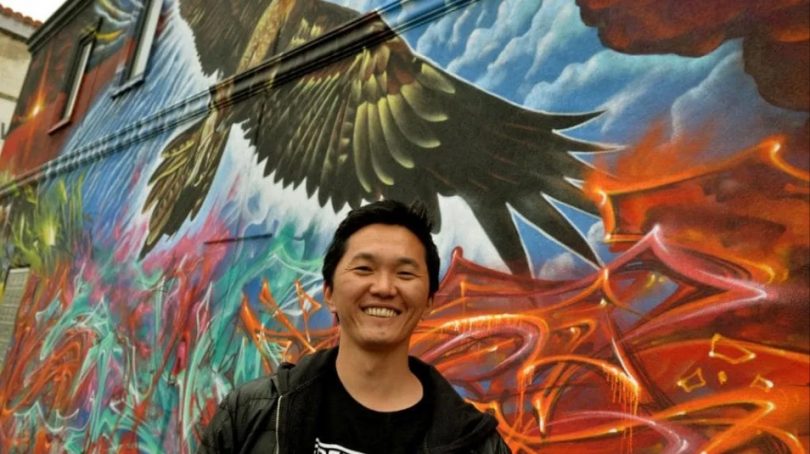 The artist charged with creating the giant mural is Melbourne-based Mongolian street artist Heesco Khosnaran who also created the murals at nearby Grenfell and Weethalle. Photo: Australian Silo Art Trail.

“There were just over 500 votes cast in the two week period which is a fantastic response and shows the high level of engagement in the Harden-Murrumburrah community,” Mr Ireland said.

It is anticipated the project will boost the tourism market for Harden-Murrumburrah and will be added to the NSW Silo Art Trail, which dovetails into the Australian Silo Art Trail.

The national trail has been championed by two West Australians, Annette and Eric Green, who in 2018 set out on a journey around Australia and became entranced first with the silo art in their home state.

According to the Greens, the concept of painted silos began in Australia when FORM WA – a non-profit art and cultural organisation – painted the CBH Group grain silos in the wheatbelt town of Northam in WA. In doing so, FORM WA created Australia’s first ever silo trail – The PUBLIC Silo Trail of Western Australia.

“After six months on the road and having visited over 10 silos, in September 2018 we created the Australian Silo Art Trail Facebook page so we could start documenting the silos that we had seen and also help other Australians and possibly international tourists go visit them as well,” they said.

Today the trail spreads across South Australia, Victoria, NSW and Queensland and the Greens continue to advocate for it via their Facebook page and website.

According to Mr Ireland, the Harden-Murrumburrah project will now move into the development stage and HRDC will work closely with owners Greg and Robyn Medway in hopes the artwork will be completed by the end of the year.

“There is a lot to work through now that we have a direction from the community, but first and foremost is waiting until our artist can safely travel into NSW,” Mr Ireland said.

Heesco Khosnaran, a renowned street artist whose body of work includes nearby Grenfell and Weethalle silos, currently lives in Melbourne.

“COVID-19 restrictions will need to be strictly adhered to as part of the process and we are currently working collaboratively with another local government area in NSW also waiting for restrictions to ease so they can have their silos painted by Heesco,” Mr Ireland said.