The old flour mill at Murrumburrah is set for a facelift. Locals will decide which mural design will adorn the two silos on the eastern end of the building. Photo: File.

Art will be taken to new heights in Harden-Murrumburrah with plans afoot to use the twin towns’ soaring historic flour mill as a canvas. The Weethalle Silos were the ninth silos to be included in the Australian Silo Art Trail and the first to be completed in NSW. Photo: Annette Green.

The transformation of the landmark building – which sits on the town’s main thoroughfare in Murrumburrah – will end decades of speculation which at one time could well have seen it become a five-storey glass planetarium replete with visitors abseiling down the two enormous concrete silos.

Now its future is in the hands of the people as Harden Regional Development Corporation (HRDC) asks everyone to vote on a project to record in a mural the history of the structure, which has been such a prominent landmark in the community for more than 150 years.

READ MORE: Vision but no money (yet) for Murrumburrah’s old mill

The mill will then join six NSW counterparts as part of the Australian Silo Art Trail. Two of these are located within driving distance, at Grenfell and Weethalle in the nearby Bland Shire. The 1926 Grain Silos at Grenfell are owned by Grenfell Commodities and the mural, completed in 2019, was the initiative of the founder, Peter Mawhinney. Photo: Annette Green.

For Harden-Murrumburrah, the project adds to the excitement for the twin towns after the announcement of $3.4 in funding for the Murrumboola Creek upgrade earlier in the year.

The creek is what divides the two settlements. Murrumburrah was first settled in 1840 and, later, Harden (nee Murrumburrah North) was established as a railway station in 1877.

HRDC Chair Richard Fleming says painting the mills is a great project for the towns and has been the focus of the HRDC Committee for some time.

“The painting of the Murrumburrah Mills will add another exciting drawcard to the town,” he said.

“The mural will connect Harden-Murrumburrah to the NSW Mill Painting trail, attract the tourism drive markets and create a destination stop for road-trippers,” Mr Fleming said.

He said the timing could not have been better in light of the neighbouring Murrumboola Creek redevelopment.

“The mural will add to the beautification of the area giving people a real insight into the history of the mills as well as becoming a connection point between the new development and the business district of Murrumburrah,” Mr Fleming said.

The land for the mill was purchased in 1858 by Miles Murphy and the flour mill was completed in 1865. Three years later, in 1868, Thomas Allsopp purchased the enterprise and introduced many new concepts into the production of milling. The famous “Allsopps Silver Spray Flour” won many awards including 25 country society recognised awards.

In 1919, a major fire occurred on site leading to a rebuild over the next four years, including construction of the concrete twin silos.

The new system allowed raw product to be transported off the Sydney-Melbourne train line system directly to the twin silos for storage. An electrical auger system was also implemented to carry the product up into the silos, all quite “revolutionary” at the time.

In 1991 the silos were mothballed, and storage discontinued. 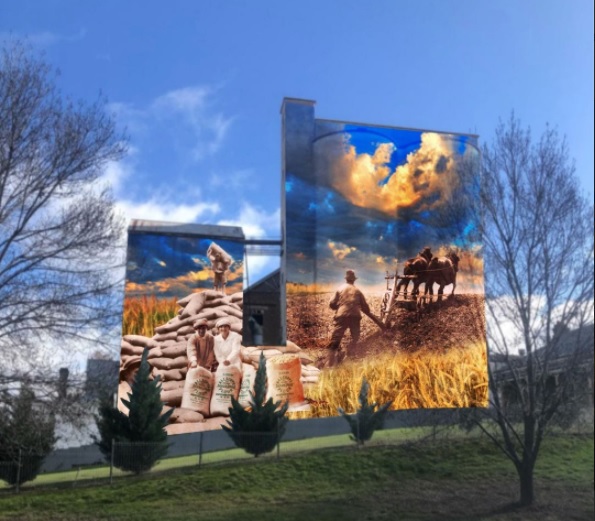 Design A for the mural to be painted on the eastern end of Murrumburrah Mill. Image: HRDC.

“Heesco is an accomplished mural artist originally from Ulaanbaatar, Mongolia, who moved to Melbourne in 2010,” he said.

A silo painting specialist, Heesco undertook the silo murals in Grenfell and Weethalle and has won many awards in his field including the Footscray Art Prize for street art.

Mr Ireland said it was up to the community to help decide on the two mural designs, which are the result of a collaboration between Harden Murrumburrah Historical Society and the mill’s owners Greg and Robyn Medway.

“We gave the artist a full history of the mills and a lot of historical photographs,” he said, “Heesco has given us two options and we are putting it out there for the community to decide.” Design B is the alternative design for the mural. The community has two weeks to make its choice. Image: HRDC.

“The painting is going to be there for the foreseeable future, and I praise the artist and HRDC for giving the community the voice to decide,” she said.

Voting opened on August 26 and will remain open for two weeks.

The successful impression will be announced on September 9, 2020.

People who don’t have access to a computer, tablet or the internet may vote in person at the following places:

One Response to Art reaches new heights in Harden-Murrumburrah

I was so very disappointed that I couldn’t get a photo of the silos because of the trees that have been planted. In one year only the top of the silos will be visible. Barking dogs and Private Property signs added to the unfriendly tableau. Sad.