Binda teacher gallops back in time to honour Aussie legends 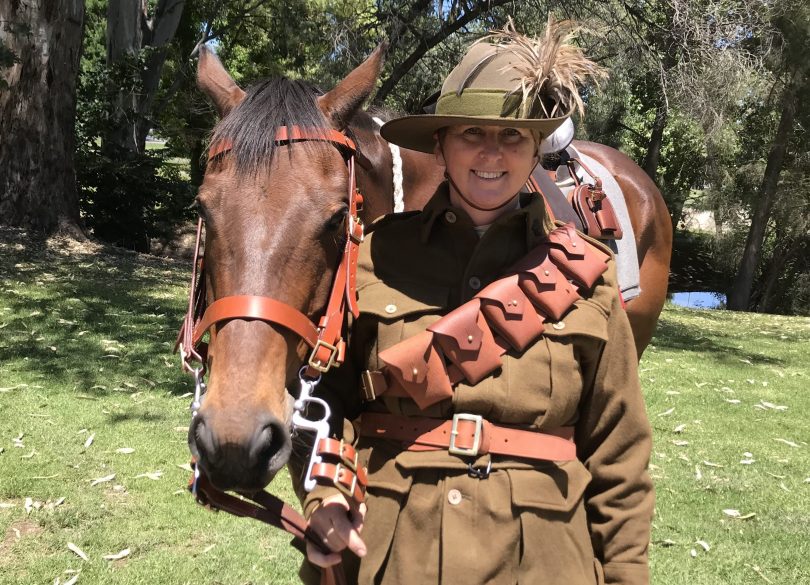 When she’s not in her role as principal at Binda Primary School, Diane Hickey and her horse, Shrapnel Impact, make sure the legend of Australia’s Light Horse Brigade remains alive. Photo: Supplied.

Diane Hickey is preparing for the ride of her life, a trek that will encompass both of her passions: horses and history.

In March 2022, the principal and teacher at Binda Primary School, in the NSW Southern Tablelands, will set off on the Light Horse Memorial Trek, a 130km ride organised by the Riverina and South West Slopes Light Horse Memorial, which raises funds to build memorials in small towns.

The group will travel from Narrandera to Wagga Wagga, from 26 March to 22 April, concluding with a re-enactment of the 130th anniversary of the presentation of the emu plume to the Australian Light Horse.

But this will be no ordinary ride. Diane will travel as a new member of the 7th Light Horse Brigade, based at Gundagai.

So how does the principal of a tiny rural school near Crookwell, with a student population of 11, find herself as a newly minted member of a legendary Australian troop?

Through her passion for horses.

“I’ve always loved off-the-track thoroughbreds and to give them a home after racing,” says Diane.

“When we sold my daughter’s horse, it was to a woman who was involved in the Light Horse. She invited me to go on a training day and I was hooked.”

Diane’s passion for horses is only matched by her love for history. Her grandfather, Leslie Herbert Wilson, was in Darwin when the city was bombed during World War II. He was a regular trooper in the army.

“I ended up going to Darwin to see where it all happened,” she says. “I’ve always wanted to do something to express my gratitude for what people did during the war, and now I can.”

The 7th Light Horse troop comprises people of all ages, skills and life stories – from a mother and her two children to a man aged in his 70s. There are teachers such as Diane, police officers, and ex-army people from Goulburn to the Victorian border, but all have the same passion for history and the importance of remembering those who died for their country.

“I didn’t know a lot about the Light Horse before this,” says Diane. “But when you learn about what they did, and how their magnificent horses led them into war, it’s just remarkable.”

When they’re not trekking across the countryside, the Gundagai-based troop’s main role is to keep the memory of the heroic horses and their riders alive by visiting small villages on Anzac Day and taking part in training exercises throughout the year. Members of the 7th Light Horse Brigade based at Gundagai. Photo: Supplied.

Members wear replica costumes and their horses have similar tack, although some will have the authentic uniforms made from heavy fabric such as wool.

“Someone asked me if I felt like a fraud wearing the Light Horse uniform,” says Diane.

“I wasn’t upset by the question as I could see where they were coming from. For me, it’s a privilege. Do I deserve to wear it? Yes, if it brings with it awareness of a special part of Australia’s history.”

Diane will be riding her horse, the aptly named Shrapnel Impact, on the trek. It will be the second time horse and rider have taken on such a journey. With her husband, Ross, Diane previously did the Bicentennial National Trail, from Healesville, in Victoria, to Canberra – about 1000km in two months.

“If you spend that much time in the saddle, you can’t help but develop a bond with your horse,” she says.

“But it is a balancing act. You’ve got to always be watching the horse, making sure they’re OK, knowing when they’ve had enough, and when you have to call it a day. I always say the last 5km is the hardest.

“I really love doing the long miles. I suppose because I love to challenge myself because if you don’t, you don’t grow.”

Diane has no fears about the March trek in regards to the journey, the distance and the company. But possibly about the uniform.

Never leave a mate behind: the quest for a Light Horse memorial in Wagga

In 2017 Wagga Wagga resident Maria Flinn was attending the unveiling of a new military statue in another Riverina town when...
Read More