Batemans Bay’s iconic old bridge continues to be dismantled bit by bit, but its spirit and memory will live on in a new artwork being commissioned for the NSW South Coast town’s foreshore.

The expressions of interest process carried out for the sculpture attracted 13 submissions from across NSW and the ACT. Five artists were shortlisted and provided final concept designs, with the selection panel unanimously selecting Sydney’s Joel Adler as the preferred artist.

Joel is all too aware of the sentiment attached to the old Batemans Bay Bridge and the weight of responsibility that comes with trying to capture its essence in an artwork.

“It’s been a big focus for me to make sure it’s made entirely from the old bridge,” he says. “I think that’s a big reason why they chose me for this.

“It’s a beautiful bridge and it will be sorely missed but this [sculpture] will stand as a reminder of its heritage and history. I’m proud to be a part of it.”

Joel has family connections to the South Coast and has visited Batemans Bay regularly during the years. He’s excited to begin the process of developing something unique for the foreshore.

The 27-year-old has a background in industrial design and says he has drawn his concept from the original designs for the old bridge.

“We used the original historical drawings of the bridge design in planning for this project, and we’ve got them up on the studio walls as inspiration and to make sure we capture the history of the bridge,” says Joel.

“The angles and shapes are all hand-drawn … It’s very much connected to the shape and form of the old bridge.

“The base of the sculpture will look like the top portion of one of the original spans, and it will have three large interconnecting hoops. Standing underneath the sculpture, it should look like waves, whereas from another angle it will look quite different.”

Workers are currently using oxy torches and large shears to harvest material from the bridge. It is then processed on shore before being trucked to a workshop in Sydney for the artwork.

The final structure will stand 5.8 metres tall and have a 3.5 metre base.

“It’s pretty big,” says Joel. “It’s basically two stories high, with a 3.5 metre base and it grows in width and height.

“People will be able to walk under it as well, and view it from below.”

The five-tonne sculpture will be trucked to Batemans Bay from Sydney and installed in-situ during a couple of days, hopefully in September or October, 2021. 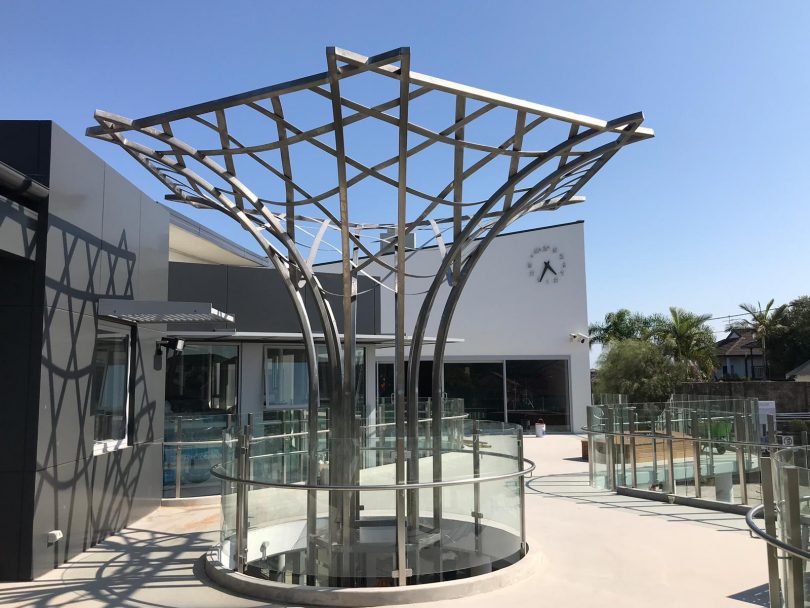 “We will be documenting the whole process,” says Joel. “The walkways and fishing platforms will be activated so people will be able to get up close to it.”

The Batemans Bay sculpture is not Joel’s first public art installation. He designed the Tree of Life at Mount Sinai College in Sydney. His work has also featured at Sculpture by the Sea in Sydney.

Transport for NSW will be keeping the community informed of the artwork’s progress during the coming months via its website.

The sculpture is being funded as part of the new Batemans Bay Bridge project.