Said to be a molotov cocktail of entertainment, ‘The Balkan Elvis: Eastern Bloc Rock’ is hitting the stage at the Canberra Theatre Centre for one night only this Thursday (July 5).

Part road trip, part redemption tale, part rock’n’roll musical, it follows the exploits of Johnny Presley, the Balkan Elvis, as he searches for love, fame and fortune behind the iron curtain of communism. With stars in his eyes, Johnny leaves his village in the mountains and hits the road, but soon finds out it’s not all big concerts, movie deals and beautiful women.

Festival favourite, and adopted Bega Valley and Monaro local Mikelangelo, is the writer and performer of the show, and gives the King an almighty transfusion, with all the suave and Balkan charisma you can imagine, setting the stage for a night of familiar songs, laughter and perhaps a few tears. 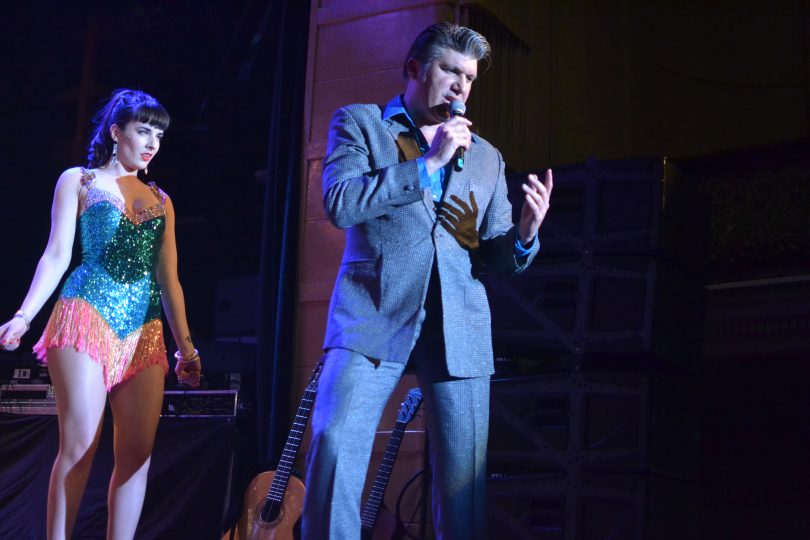 The Canberra born singer, songwriter and performer who now lives in Majors Creek, said about the journey of discovering Elvis and his music,“I first bought an Elvis greatest hits album from an op shop when I was 16. Of course, I knew about Elvis before then, but I didn’t know much about the man or his music.”

“It was a double vinyl set, with songs from the 50s, 60s and 70s, so the records covered quite a lot of ground; from rockin’ tunes like ‘Little Sister’ to the paranoid delusions of ‘Edge Of Reality’, to the unintentional tragi-comedy of ‘Old Shep’, and a late period live version of ‘Are You Lonesome Tonight?’, where Elvis forgets the words and laughs to himself as he talks about gazing at a bald man and wishing he had hair. It was a good way to get to know the best and the worst of Elvis,” he said.

“Elvis is one of the most naturally gifted singers I’ve ever heard, on his great recordings, when the lyrics and songs match his talent, for example ‘In The Ghetto’, or ‘Love Me Tender’ or ‘If I Can Dream’, he has a power and a restraint that I have rarely heard in any other singer. At his best, his voice is beautiful and full of deep pathos and yearning.”

“And his story, well in ways it is the failure of the great American dream, the failure of capitalism: that you can be one of the most loved, richest and talented men in the world and still hate your life and end up dead in your own bathroom at 42.” 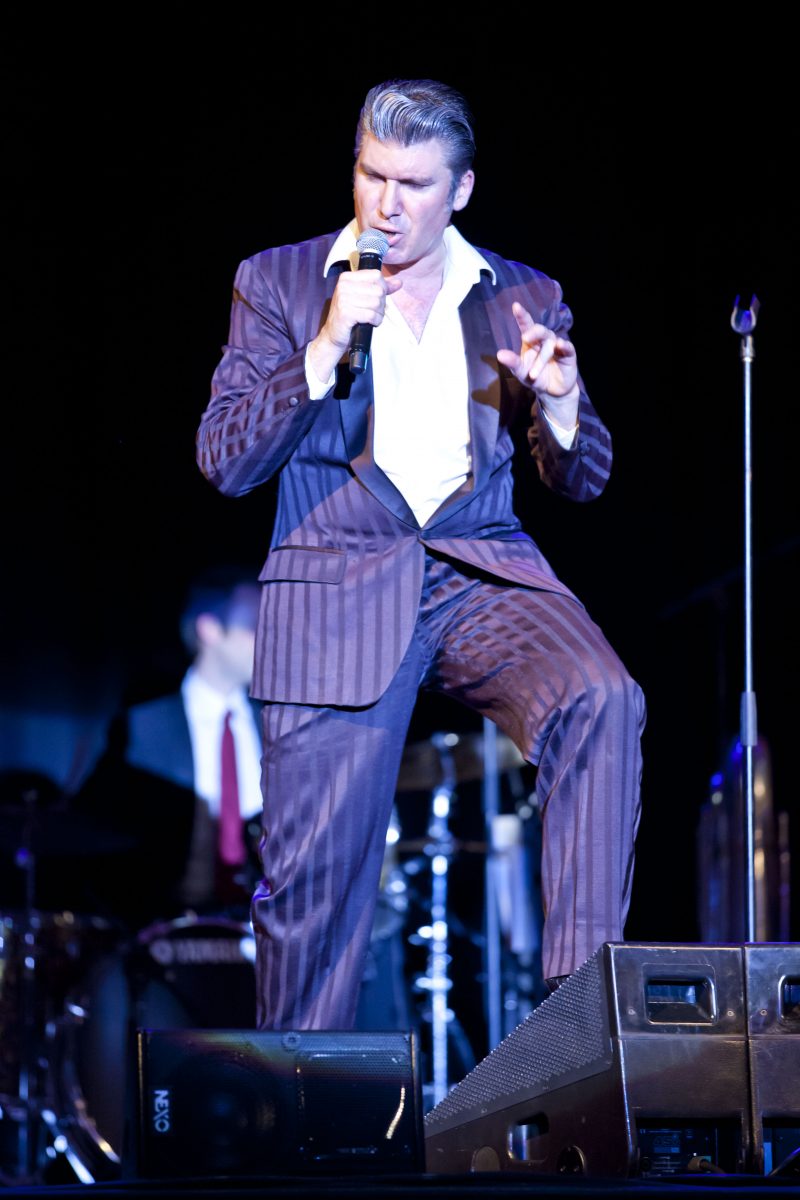 As for the inspiration for writing Balkan Elvis, Mikelangelo reveals, “Seven years ago I was holidaying in the village of Tucepi in Croatia where my father grew up. It’s a beautiful spot on the Adriatic coast, quite idyllic, with calm, sparkling blue waters and a myriad of ancient islands to explore. One balmy evening, I was walking along the promenade by the sea and in the outdoor area of a restaurant, I saw a man standing on a small stage wearing a red and silver jumpsuit, with the huge night sky and the dark of the sea behind him.”

He was singing in English with a strong European accent, accompanied by a backing track and a seated man wearing shorts and a cowboy hat who was miming along on guitar. The singer’s microphone had an intense delay effect on it, so his voice echoed as if it was bouncing off all the old stone buildings. He spotted me and my quiff and started singing his song directly to me, it was a slow sad, country song – ‘Help Me Make It Through the Night’.”

“I sat down and listened, thoroughly intrigued by the strange scene. When the man finished his set, he came up to me and introduced himself, he was the Croatian Elvis. The man miming on guitar and cueing the backing CD tracks was his brother,” he said.

“We got on immediately, and sat around talking, singing and drinking all night, until one of the neighbours called the police, who came, lights flashing, sirens on, and told us to go bed. That was the first inspiration for the story of Johnny Presley, the Balkan Elvis.”

Mikelangelo then set about writing the stage play, saying “The story imagines how Elvis’ life would have turned out if he had been born in Communist Eastern Europe and played piano accordion instead of guitar.”

I use Elvis’ story as a way to kickstart the narrative, but at every point where something happened to the American Elvis, it turns out differently for the Balkan Elvis. Rock’n’roll is illegal in the Eastern Bloc, which makes things difficult; and the Colonel he meets actually is a Colonel in the army, and doesn’t become his manager, he sends him off to fight in the Balkans War!”

“There are many trials and tribulations for the Balkan Elvis, but he stays good humoured through all the ups and downs and learns from his travels, and unlike the American Elvis, his story has a happy ending.” 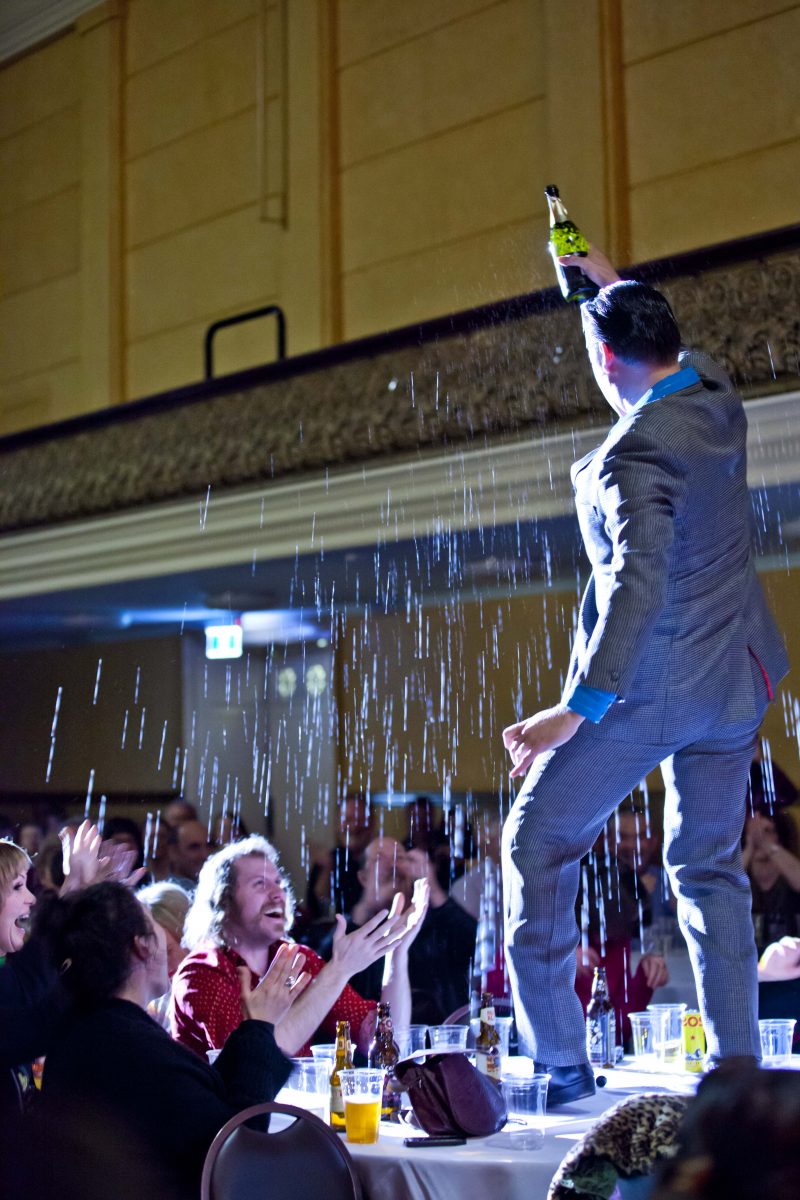 ‘The Balkan Elvis: Eastern Bloc Rock’ is playing at the Canberra Theatre Centre on Thursday 5 July. For further information and tickets, visit the website – https://canberratheatrecentre.com.au/