NSW Minister for Transport and Roads, and Member for Bega, Andrew Constance has acknowledged the role of climate change during the Black Summer bushfires, which has been welcomed by environmental groups across the Bega Valley and Eurobodalla shires.

Mr Constance made the remarks in an interview with The Sydney Morning Herald on 13 October.

After living through the past summer’s bushfires along with thousands of NSW South Coast residents, he said during the interview it was “time to stop falling into the old trap of politics and take serious action to mitigate climate risks”.

“[The bushfires had] a raft of reasons behind them, but the predominant one was climate change,” he said.

“The trauma that Andrew Constance and so many of us experienced has led him to acknowledge that climate change has made the bushfires more extreme than ever before,” said the statement.

“We are so glad Mr Constance said, ‘I’m going to dedicate the rest of my life to making sure this doesn’t happen again.'”

“I am so heartened to see my local member acknowledging the science that climate change was a key driver of the summer bushfires which took such a heavy toll on our community,” said Jack Egan, a member of the group who lost his Rosedale home on New Year’s Eve. 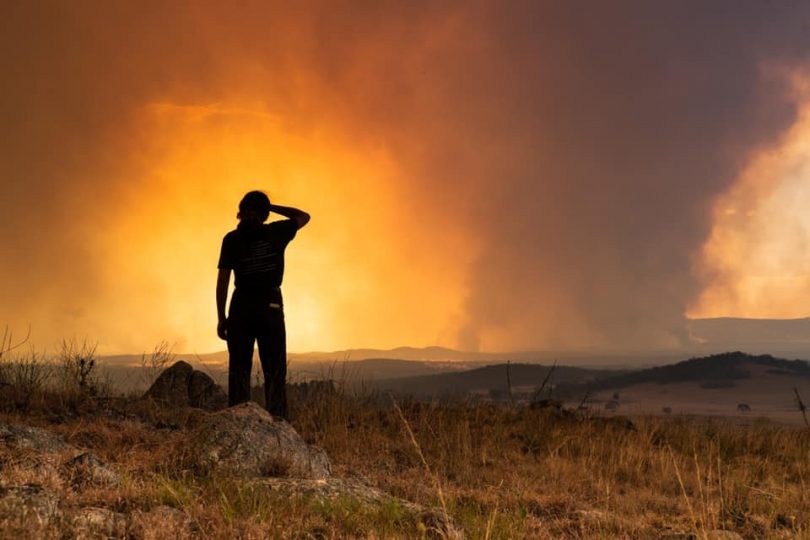 Bushfires near Braidwood during the Black Summer. Photo: Jarrah Knowles.

“Our region paid the price for climate change this past summer, with the loss of lives, homes and livelihoods.

“While everyone is anxious about worsening extreme weather fuelled by climate change, and the Federal Government’s failure to address the problem, it reduces our anxiety to see our local member acknowledging the science and joining the call for climate action.

“We look forward to working with Mr Constance to usher in job creation and clean energy solutions that transition our economy away from the key drivers of the climate crisis: the burning of coal, oil and gas.”

Jan Harris, also a member of Bushfire Survivors for Climate Action, lost her family home in the 2018 Reedy Swamp fire.

“Losing my home was traumatic, and seeing the Federal Government continue to choose the interests of fossil fuel companies over community safety has been so distressing,” she said.

“But it gives me hope to see my state member from the Liberal party, and federal member, who is from the Labor Party, in agreement on the threat that climate change poses to our community.”

Both 350Eurobodalla and Bushfire Survivors for Climate Action look forward to supporting their communities and local and federal governments to enact a plan to reduce emissions.

“We now need a plan for NSW to achieve the government’s goal of net-zero emissions by 2050,” said the statement from 350Eurobodalla. “The government also needs to look after the communities which now rely on coal, gas or logging native forests.

“Mr Constance’s proposals to electrify transport and generate local power are useful, but a full plan to get to zero emissions is needed.”

Working to reduce emissions and slow global warming is very much a long term goal which Emergency Leaders for Climate Action concede. In their submission to the Victorian IGEM Inquiry into the Black Summer bushfires they state:
“Of all the factors that contribute to the intensity of a fire (temperature, wind speed, humidity, topography, fuel moisture and fuel load), only fuel load can be readily modified by human effort, but bearing in mind that since the industrial revolution it is now clear that humans have also modified the world’s temperature, and actions on emissions MAY EVENTUALLY assist to bring this down.” The ELCA submission makes a number of recommendations regarding increased spending on better land management and fuel reduction.
It is misleading for those ‘experts’ and others with strong media profiles, including Mr Constance, to imply that reducing emissions alone is the solution to mitigating bushfires into the future.

NSW Transport and Roads Minister Andrew Constance has announced he will be stepping down from the ministry this week and...
Read More