A colourful character shares his memories of Moruya 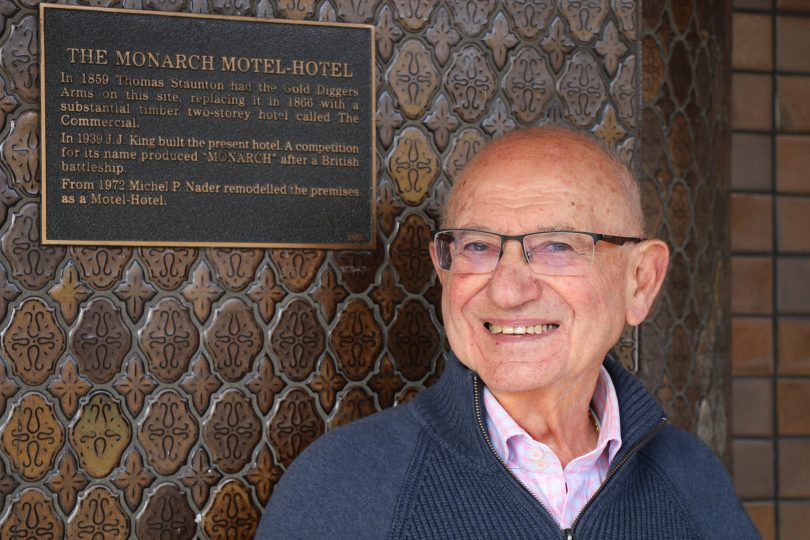 Known for the colourful paintwork of his commercial buildings in the Eurobodalla town centres, publican and businessman Michel Patrick Nader has seen a lot of change since arriving in Moruya in 1929. Now aged in his 90s, Michel can still be found working at the Monarch Hotel on Moruya’s main street.

With a mischievous twinkle in his eyes, it is easy to see that Michel has lost none of his enthusiasm for life in the Eurobodalla.

His long life and success is testament to hard work, grasping opportunity and the enduring bonds of family.

Originally from Lebanon, Michel’s parents emigrated to Australia between World War I and World War II. His mother, Sitti, was just 17, and his father, Rashid, 20, when they left Suez in June 1927.

The great famine at the end of World War I prompted a mass migration from Lebanon. Michel says young couples such as his parents left the ‘old country’ as soon as they were married.

“It was the thing to do,” he says. “No-one wanted to stay so you picked where you wanted to go – the United States, Canada or Australia – bought a ticket and left.”

Upon arriving in Sydney, the young couple were welcomed by the small but growing Lebanese community.

Michel was born soon after.

“My parents wanted to settle in Sydney but jobs were scarce during the Depression,” he explains. “They were told there were lots of farm jobs in Moruya so they got a ride on a truck and arrived in Moruya in 1929.” With the assistance of Abraham Emmott, of the famous Emmott Beehive Store, which is now Harris Scarf, the young Nader family set up home in Queen Street, Moruya, on the site of what was to later become the Fiesta Theatre.

“It was essentially a little shed with no electricity, exposed to the heat and cold, but it was home,” says Michel.

His brother, John, who was to become a lifelong pal was born in 1937.

Michel’s father ran a boot repair shop, expanding to a general store selling everything from clothing to linoleum.

The shop moved to various locations until they moved to their own premises, between the newsagent and the pharmacy on Vulcan Street. The Nader family made every concrete brick for the shop by hand in their back garden. Michel’s memories of Moruya are of a bustling small town.

“The population back then was about 1500 but there were not so many houses,” he says. “There were often seven to 10 people living in a house. The whole family would live together.”

With poor roads, goods for the shop came in via a steamer from Sydney.

“The steamer came in to Moruya every Friday evening at high tide,” says Michel. “The call would go out, ‘The boat is coming,’ and everyone would gather at the town wharf.

“I also remember a brass band playing on Friday nights outside the picture theatre where Silly Willy’s is now. As boys, we were paid to spruik for business: ‘Come in, come in.’ That would never happen these days – we were just little kids.”

READ ALSO: The rising tide to be honoured with sculpture art at new Bay Pavilions

Michel said the nuns at St Mary’s School tried their best to interest him “but life outside the school gates was more exciting”.

After leaving school, Michel headed for Sydney but says he missed the cooking and the family life so moved back to Moruya. His mother offered him the menswear side of the business when he was just 17, and the rest is history.

During the years, Naders store grew into a hugely successful business that was to last for 75 years until it closed in 2004, not because Michel had enough, but because his long-standing staff wanted to retire.

Michel married his wife, Pamela, in 1957 and had three children. His son, Michel John, is the publican of the Air Raid Tavern, and grandson, Reuben, is continuing the tradition, helping his grandfather run the Monarch Hotel. With the success of the family business, Michel says he wanted to secure his family’s future and decided to make investments in each of the town centres.

He purchased the Monarch Hotel in 1972, an Art Deco style building built in 1939 on the site of the old Commercial Hotel and converted it to a hotel-motel. During the next 20 years, Michel purchased sites in Mogo, Moruya, Narooma and Batemans Bay.

“Property was very cheap back then,” he says. “No-one wanted it.

“I remember I was the only person bidding on a site in Batemans Bay. It was a dilapidated timber building, but it had a double main street frontage and still nobody wanted it.” Following the purchase, Michel worked onsite, wheeling barrow loads of bricks to build what is now Fenning Place, a pink and purple painted arcade between Orient Street and Perry Street in Batemans Bay.

As part of his enthusiasm for the Eurobodalla Shire, Michel has contributed to many community organisations and projects, including installing a replica of the famous ‘pink gates’ found at the Vulcan Street entry to the showground, near the council chambers.

If you look closely on each of his buildings, you will see a small plaque with the history of the site.

Michel’s collection of photographs in the Monarch Hotel are worth checking out just for a glimpse of the rich history of the little town he drove into on a truck, in his mother’s arms, more than 90 years ago.

13 Responses to A colourful character shares his memories of Moruya

I think that’s great what mitchel has achieved. I have known mitchel since I was a small boy and now am 50 my Dads side of the family are all born and bred in Moruya the Coopers and I myself am now living in Lake Tabourie congratulations Mitchel on a massive achievement Keith Cooper jnr

Such a lovely story about Mr Nader and his family, such good local people.

So glad to see you looking so happy as you age so graciously, Mr Nader.

What a beautiful story. Local/community history we should be regularly reminded of! Thank you.

Michel Nadwrbhas always been a very welcoming and polite person and has done a lot for Moruya My only concern is his poor cockatoo ‘Donald’ who sits out in an aviary in the car park at the back of the Monarch with no stimulation, no toys , no company. Day after day after day. That is no life for a cocky! . Please Moruya get behind the cocky and see if you can have him freed or have him get a companion for Donald!

Donald’s been given a girlfriend just the other week. 🙂

Wow, I never knew this history of the Naders, and had no idea it went so far back. I used to play in bands in the Monarch, employed by Michel in the late ’70s. He was always good to work with and very tolerant of we Deua Valley ‘hippies’. Now I better understand why he always seemed so civilised.

The Naders are a wonderful family and have contributed so much to Moruya. Great to see a good man recognised in this story.

Thank you for a wonderful story about a founding family. We loose our history if it is not written down, so thank you, again.

Fantastic! An interesting a lovely man!!

I found him to be a gentleman and easy to talk to, Well done Mr. Nader.

Great little read. A truly great man. Has done more for Moruya than anyone else I know.

Great story of this delightful character. Thanks.

Moruya legend Ack Weyman to be honoured in bronze alongside his son, Mick

Ack Weyman only missed two games of his son, Michael’s, rugby league career in Australia. This was a fair effort...
Read More

There's plenty to do in the regions this Mother's Day weekend - for mum and the whole family. Running across...
Read More