Wood hammers iron to sculpt an artistic legacy in the Riverina Racks of tongs and hammers line the wall amid a collage of large scale sketches and half-finished projects.

Specks of rusted steel blanket the ground outside. “It looks like the Pilbara out there after it rains,” John says with a wry smile.

Red fire roars in the propane forge as the Wagga based blacksmith and sculptor draws out a plate of glowing steel and submits it to the beat of the enormous power-hammer that takes pride of place on the workshop floor.

Dressed against the cold in a beanie and spark-burned fleece, John is crafting a collection of curved plates that will form part of a public sculpture commissioned by Hay Shire Council.

“This particular one is for their main street to go outside the council chambers and it’s to do with a town icon called Mrs McGrath, who was famous for her pet sheep,” John explains, indicating the 2-m-tall figure of a woman in a hat, gripping a pole. John Wood demonstrates a miniature model of the public artwork he is creating for Hay Shire Council. Photo: Chris Roe.

“Mrs McGrath was the bridge operator back in the early 1900s when someone had to open the bridge to let the paddle steamers through.

“When the large mobs of sheep came through Hay, they would have difficulty getting the sheep over the bridge, so Mrs McGrath used to lead a pet sheep onto the bridge and the big mobs would see the sheep and quite happily walk over and down the main street.”

READ ALSO: Thomas’ upcycling helps first-timers get on their bikes

The work-in-progress sits by the open shed door where it can be welded together and painstakingly ground into shape. When complete, the four-piece sculpture will be interactive.

“One of [the sheep] has got a saddle, the other’s wearing a hat and that’s going to have a bell around its neck that can be rung and the other sheep is sitting on a concrete bench reading a book with a pair of glasses,” he says.

Given Hay’s proud history with Merino sheep, John says they needed to look the part.

“It was very important to get the sheep to look Merino-like otherwise, I think it would be hunted out of town,” he says. 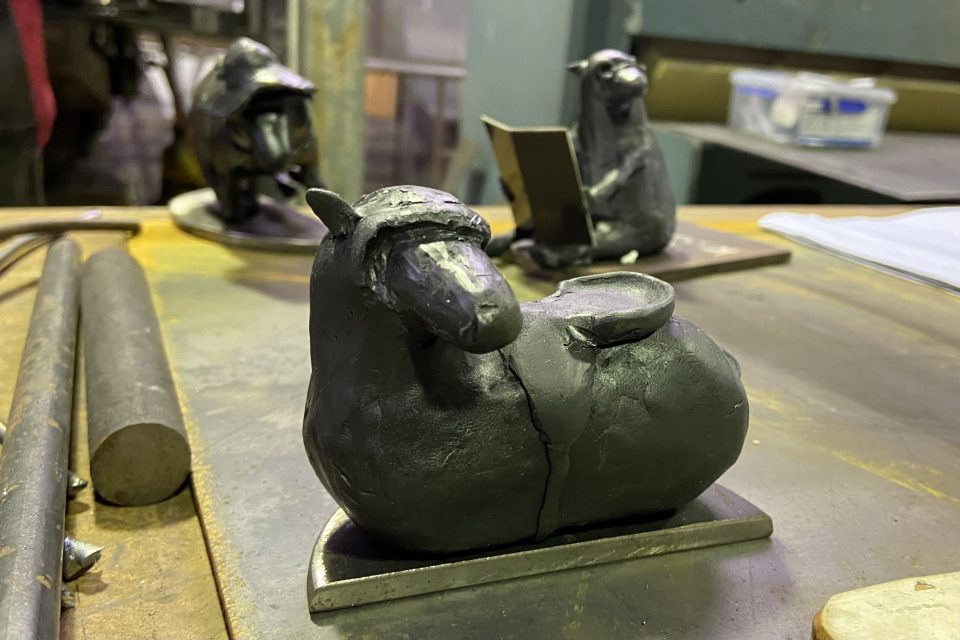 The sculptures of Mrs McGrath and her sheep will be interactive. Photo: Chris Roe. The sculptures of Mrs McGrath and her sheep will be interactive. Photo: Chris Roe.

From a farming background, John and his wife Natalie continue to operate a 240-acre property on the outskirts of Wagga and run more than 100 head of Black Angus cattle.

His interest in working metal began after he signed up for a blacksmithing course in Wangaratta in 1996. Since then, John’s work has evolved from bespoke farm gates and signs to large scale public art projects and even performance pieces.

“I’ve had a couple of shows in here,” he says gesturing around the forge.

“Collaborations with an artist called Vic McEwan where I’ve been forging along with Vic’s music. We have this old pump organ and we had him sitting up on the table and we’re sort of collaborating with the sounds of forging and sounds of music, like an industrial opera.”

The live event came to a dramatic close as John completed the large chain he’d been forging and drew a red-hot steel heart from the forge.

“I took it to the hammer and punched this big hole through this heart and then hung the heart on the chain. Then the lights died down and there was just this glowing heart slowly fading. It was really cool,” he says.

Despite the challenge of balancing his art with the demands of a working farm, John is showing no sign of slowing down.

“I enjoy putting something onto paper and having a client that understands and gets what you do and is happy to pay for it. Because it ain’t cheap!” he laughs.

“And then just seeing it done and installing it at the end of the day. It’s a cool thing.”

Find out more about John and his work on the Wood Iron Design website.

Hanging Rock homestead, one of the oldest properties in the Wagga Wagga region, has just gone on the market. Expressions...
Read More