Where you can spot the ‘pink supermoon’ tonight (spoiler alert: everywhere) 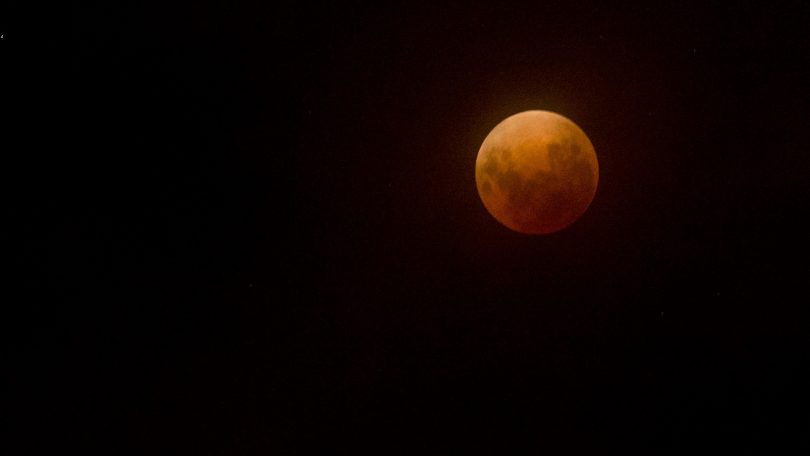 Although this moon won’t be pink, it will be super. Photo: Supplied.

Skywatchers rejoice! One of the easiest astronomical events for everyone to enjoy is coming to a sky near you – a ‘pink’ supermoon.

The moon won’t actually be pink, but it will be very, very bright. This is because the full moon occurs when the moon is closest to the earth.

It’s named for the pink phlox, a flower that blooms around this time in the US.

While it isn’t a once-in-a-lifetime event, there will only be two supermoons this year, so it is a rare occurrence nevertheless.

The best viewing time will be early in the evening, from 5:30 pm onwards as the sun sets.

The official word is that the moon will be visible from 5:40 pm tonight to 7:29 am tomorrow.

READ ALSO: Hot in the City: Taste the flavours of Latin American street food at Chimi and Churri

Canberra Astronomical Society president Peter Williamson says you won’t have to go anywhere special to see the pink supermoon or even leave your backyard or street.

“It’s going to be so bright that you’ll be able to see it from all over, right from when it rises in the East all the way until it sets.

“So, there’s actually no need to travel out anywhere to look for darker skies,” he says.

That means whether you’re a night owl or an early bird, you’ve got no excuse for missing it.

Keen photographers in the capital region who want to snap the perfect shot of the supermoon might enjoy the view across Lake George to the east, or you might want to snap up just how much light it casts across the city from wherever you happen to be.

If you’re on the coast, you’ll be able to watch the supermoon rise from the ocean.

Readers can watch with the unaided eye, but binoculars will reveal craters and dark features known as Mare (Latin for seas), which are areas containing Basalt rock.

The next supermoon will be visible on Wednesday, 26 May, but this time it will be a super ‘blood’ moon and will actually appear red.