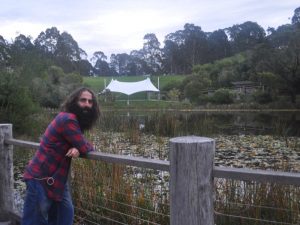 Wearing a t-shirt that said “Ask your teacher to take you outside” and accompanied by the sound of frogs enjoying recent rain, the host of ABC TV’s Gardening Australia has given some radical advice to the voters of Eden-Monaro.

Costa Georgiadis didn’t come to Bermagui with the intent of influencing voters in the July 2 Federal Election, but at his recent lecture it was clear voters were hungry for his advice.

Costa is a terrific fella, I have met him a number of times “on and off air”. He is one of my favourite humans. To have him in front of my family again was not to be missed.

He is warm and generous beyond any measure, but his visit to the South Coast of New South Wales presented an opportunity for Costa to shine in ways that are different to the TV gardening advice many know him for.

As a guest of Four Winds, Costa was given a platform under the banner of their Radical Voices talk series.

The idea of the series is to give radical ideas an opportunity to rise above the buzz of all the news, information and comment that flows into a modern back pocket.

First in the series earlier this year, was Australian conductor and music educator Richard Gill, speaking on the value of music.

During Costa’s 60 minutes or more on stage, he delivered quotes equal to the one on his t-shirt.

“We have allowed agendas to be set by momentum that is out of control.”

“We need to install (in kids and community) an ability to shift perspective.”

“Trend is a road to the cliff’s edge.”

“It’s the subtleties that have the impact, because they last.”

That last point was one of the themes Costa ran with.

He spoke of people feeling overwhelmed by an issue or a problem and not knowing what to do, how to respond.

Stick with the small stuff was Costa’s mud map.

If you are worried about garbage and the toll it takes on our planet, than Costa’s advice was to reject the disposable coffee cup your favourite cafe offers you and get a reusable coffee cup that the barista refills when you visit.

“You are a wonderful example just by carrying that (coffee cup),” Costa says.

“People two rows in front and two rows behind hear that.”

At the heart of Costa’s pitch were the values we use to make everyday decisions, which is perhaps why confused Eden-Monaro voters felt they could ask Costa’s advice.

Costa told the 100 or so people gathered in the Windsong Pavilion, “Value is set by our values.”

“If we value something, we need to back it in,” says Costa. As an example Costa pointed to the single lane timber bridges that dot the Bega Valley, as being one of his favourite things about the region, something he values about this place.

He spoke about his fear of seeing such structures replaced by a concrete drain in order to meet the demands of a busy B-double truck and a supermarket supply chain.

He urged the community not to let the value of timber bridges like the one at Cuttagee or the Murrah to be set by big business.

When confronted with those questions that call on us to express value/s, Costa suggested answering with a simple response, one that seemed to come from the elders of his own family – “That’s just how it is.”

The switch was flicked towards the election when the floor of the Windsong Pavilion was opened to questions.

The very first questioner almost pleaded with Costa for advice on who to vote for given the contents of his address.

Costa didn’t answer directly but spoke of his frustration with the election campaign strategy of the day.

He called for an end to jingoistic three word slogans, describing that approach as insulting.

“Call them (political candidates) out on it” advises Costa.

“It’s offensive marketing, we need to call them out on it,

“We (voters) want the facts, so that we can make a judgement,” says Costa.

In a rallying call to his audience, Costa tried to instill a faith in our political process that is perhaps on the slide.

“We have the ultimate control over our systems,” Costa says.

“We have power and we underestimate it, we just need to chip away,” he says.

Separate to the power of July 2, Costa called on communities, regional communities especially to work together.

He pointed to the Felton Food Festival which happens each year south-west of Toowoomba in Queensland. Costa explaining to his NSW South Coast audience, that the festival had grown out of community concern that big business was going to take over and destroy what the community valued most about where they lived.

From that concern grew a festival that celebrates farmers, families and the environment. So much so that the value of that event and the values expressed by the community now make it harder for any business or government to suggest any other use of the land.

And regional communities have particular power according to Costa.

“Regional communities have a lot more access to the change makers.”

In the mingling that happened after this “radical talk” – stirred by the idea that the approaching election does present an opportunity to challenge ideas and start conversations, some in the room were heard asking Costa when they’d be able to vote for him?

Pic 1: Costa in the grounds of Four Winds, just south of Bermagui on the NSW South Coast. By Terry Bunn

Pic 2: Cuttagee Bridge, one of a number of timber bridges on the coast road between Bermagui and Tathra. By Bill Brown of ABC South East

Pic 3: Costa on stage in the Windsong Pavilion. By Marg Hansen

Roll up your sleeves alongside television stars Costa Georgiadis and Paul West and get to work making an eco-island garden on...
Read More

Flags at half mast for Country Party great Doug Anthony

Many Canberra commuters who pass Parliament House on a daily basis will have noticed that the flags are flying at...
Read More

Your right to vote as a non-resident ratepayer