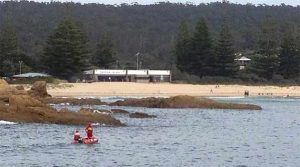 While keeping an eye on swimmers, Dr Nott was reading ‘The Weather Makers‘ by Tim Flannery, a look at the history and catastrophic future impacts of a warming planet.

And a warming planet we have.

The region’s run of beautiful beaches and cool mountain streams will offer blessed respite as South East NSW heads into a week of warm days, with forecast top temperatures above 30 degrees every day for most centres.

The sweaty weather is no surprise, it’s January, a month where records are set. But it coincides with news that 2016 was the world’s hottest year on record, due to the continuing influence of global warming according to the Bureau of Meteorology (BOM).

Dr Nott says he remains committed to the cause of addressing global warming eleven years after that famous beach patrol but despairs that people and governments fail to respond to the mounting science.

“It’s really so terribly clear that we are hurtling towards an environmental disaster,” he says.

“That’s going to be something that has an enormous impact on my kids.”

Dr Nott is frustrated by but appreciates the fact that many people don’t understand or ignore the science.

“People think about climate change in the [same] way they think about death,” Dr Nott says.

“They think it’s a long way away and I am not going to think about it now.

“I find that really frustrating because that’s putting my kids future at risk,” he says.

There’s no hiding from the science for those who will inherit the future.

Like CEFE, the AYCC recognises the opportunities climate change presents, while also warning of the total fossil fuels take on our future.

The impacts include rising sea levels and more extreme weather events and the myriad of human, environmental and security challenges that follow.

The understanding youth have for this issue was further highlighted to me in the run up to New Years Day 2017, when my eldest son produced a poem – at the pushing and pulling of his Bega based English tutor Elizabeth Blackmore.

I am the meanest thing on earth yet also the calmest

I have seen changes that no human could imagine

I was here at the beginning

And I will be here at the end

I am the most powerful on this earth

Why do you kill me? Yet you wouldn’t be alive without me

I am getting bigger

With every factory you build

With every atom that you let go

Very soon I will crack and destroy everything

A few billion years ago

I am the sea Tarraganda RFS shed near Bega, the solar panels were installed with the support of CEFE

Every community building in Tathra now generates it’s own power and puts the excess back into the grid. Countless Rural Fire Service sheds, surf life-saving clubs, community halls, and schools in other towns now do the same, all with the backing of CEFE.

Eleven years on similar projects continue, building towards CEFE’s 2020 goal of reducing the Bega Valley’s power needs by 50% while at the same time generating 50% of the Shire’s energy needs from renewable sources – 50/50 by 2020.

If you are keen to add some science to the emotion and colour of Jim’s words, the BOM’s Annual Climate Statement is great reading (and viewing) for weather nerds and paints the full picture.

*The world’s hottest year on record and the third year in a row where that record was broken.

*Ocean temperatures were the warmest on record, with the annual mean sea surface temperature 0.73 degrees above average.

*A year of extreme weather events. 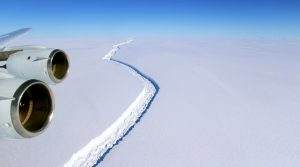 News too this week that the crack in the big Larsen C Ice Shelf has grown by a further 18km.

Only 20km of ice now connects this 5000sq km (twice the size of the Australian Capital Territory) ice sheet to the Antartic continent. The result’s come from the MIDAS Project, a collaboration of UK universities and academics monitoring the effects of global warming in West Antarctica.

As Matthew Nott suggests, the future is being shaped now.

The science gives the facts and figures of it, my 14-year-old son gives it a voice.

As adults imagine being one of the next generation/s knowing that this is part of your future.

*Poem reproduced with permission of the author, he even made me pay an artist fee!